When visiting personal networking sites (e.g., Facebook, Twitter, and Pinterest) people experience emotions around memories and entertainment, whereas when visiting professional networks (e.g., LinkedIn, BranchOut, and BeKnown) people are motivated by the sense of purpose to achieve the goals they've set, the study found. 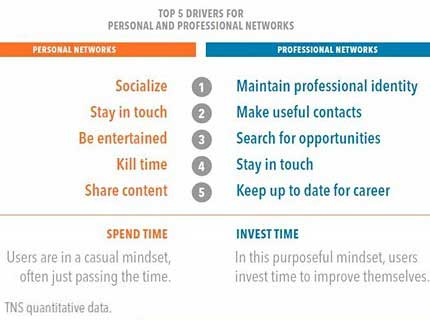 Below, additional findings from the study titled "Market to Mindset," which explores what motivates people when they visit social networking sites, and what type of content they prefer when they visit those sites.

The casual and purposeful mindsets create differences in the content people expect to see on each type of network.

Among professional social networkers, career information tops the list for preferred content, followed by updates on brands, and current affairs: 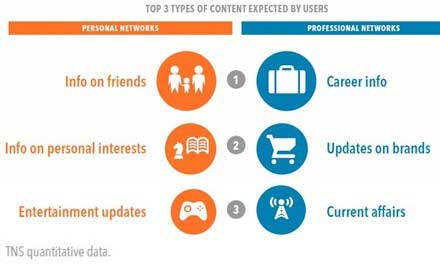 The types of brand content that users want to see further reflect the mindset divide between spending time and investing time.

Among professional social networkers, content related to improving oneself professionally is most preferred (15%), followed by content that helps people make business decisions (10%). 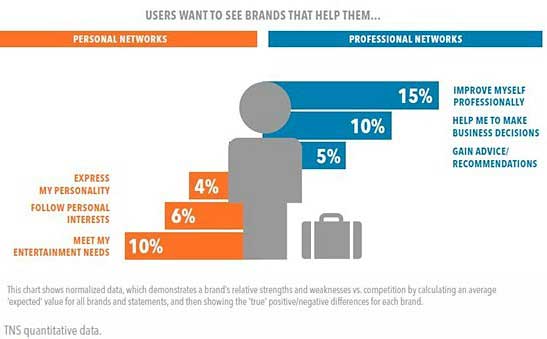 By contrast, among personal social networkers, content that entertains is most favorable (10%).

The casual and purposeful mindsets are also reflected in users' motivations to connect and their ability to influence.

When using personal, social networks, 61% of people view influence in terms of sharing information with others, whereas 39% view influence as being the first to know.

About the data: This research was conducted by TNS on behalf of LinkedIn among more than 6,000 social media users (age 18+) across 12 countries, February to April 2012. The study was conducted in two stages consisting of quantitative and qualitative phases. Professional and personal networks were grouped by how users identified the majority of their connections. For the study, professional networks consisted of LinkedIn, BranchOut, BeKnown, Viadeo, and Xing; personal networks were Facebook, Twitter, Pinterest, and Orkut.