How Social Tools Are Used in the Workplace [Infographic]

Some 46% of global information workers say using social tools has increased their productivity, while 9% say such tools have reduced productivity, according to a recent report by Ipsos Public Affairs and Microsoft.

In addition, 42% of say that social tools have resulted in more workplace collaboration—something that 39% say there is not enough of at their workplace.

Employees in the Asia-Pacific region are most likely to attribute higher productivity levels to the increased use of social tools, followed by Latin America and Europe. 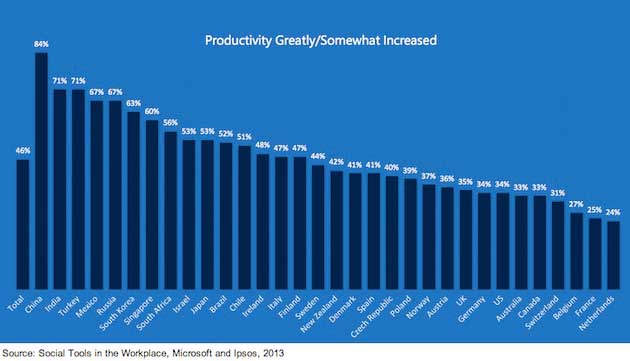 Below, additional findings from the report, which was based on a survey of 9,908 employees across 32 countries.

Popular Social Tools in the Workplace

Most information workers say they use email (93%), team sites/intranets (58%), instant messaging (56%), and videoconferencing (51%) for professional purposes.

Though external social networks are more likely to be used for personal than professional purposes, they are being used in the workplace by nearly one-third of workers (31%).

Six in ten survey respondents (62%) said they have access to all of the tools and technologies they need to do their job well, and many report that their employer encourages them to use social tools, such as email (80%), team sites/intranets (45%), video conferencing (42%), and instant messaging (38%). Over a quarter (27%) say their company encourages news feeds, while 19% say their company supports public FTP/cloud storage. 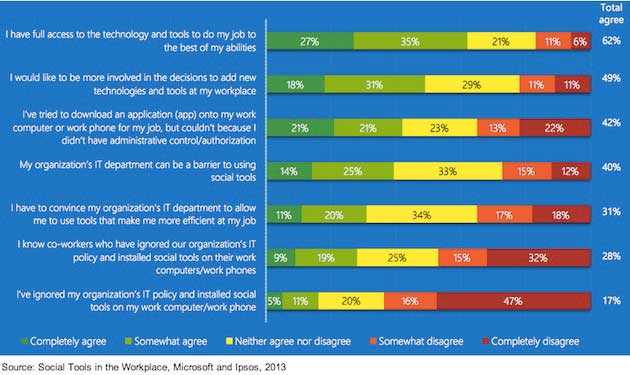 For more results from the survey, check out the following infographic:

About the research: The report was based on data from a poll conducted between March 25 and April 24, 2013. For the survey, an international sample of 9,908 information workers (defined as those employed at a company with at least 100 employees who use a PC, laptop, tablet, or smartphone for at least 75% of their job function) in 32 countries was interviewed online.

Continue reading "How Social Tools Are Used in the Workplace [Infographic]" ... Read the full article