On Twitter, Vine Engagement Rate Catching Up to YouTube's

In the six months since video app Vine was introduced, it has almost caught up to YouTube videos—in terms of engagement on Twitter—according to a recent report by SocialBakers.

The Vine mobile application, which allows users to create short, six-second looping videos, has until recently been available only for iOS (an Android version was released earlier this month). 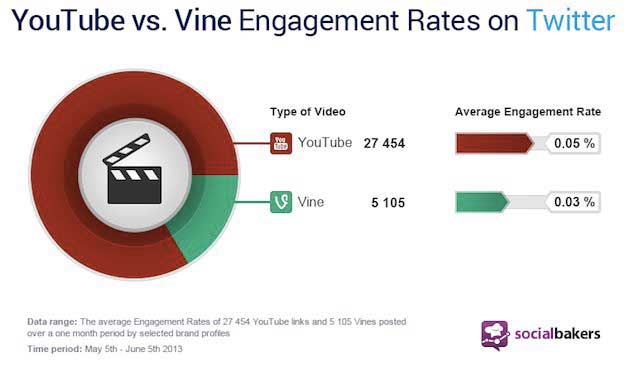 As the report notes, one reason that Vine uploads may be doing well is because of how tightly the app is integrated into the Twitter platform (Vine was acquired by Twitter in 2012). Also, the short length of the videos may make for easier skimming.

About the research: The report was based on an analysis of the engagement rates of 27,454 tweeted YouTube links and 5,105 tweeted Vine links by selected brands between May 5 and June 5, 2013.