Which Emails Get Rescued From Spam Folders

Emails from banks, job sites, and dating sites are among those most likely to be rescued by consumers from their email spam folders, according to a recent study by Return Path.

The study examined This Is Not Spam (TINS) rates—i.e. how often subscribers "rescue" messages from their email spam folders—in 1Q13. The research was based on an analysis of messages sent to Return Path's panel of three million email users. Below, key findings.

TINS Rates for All Brands

Across a sample of more than one billion email messages received during the first quarter of 2013, fewer than two per thousand (0.17%) were rescued from the spam folder.

This low rate is most likely due to the obstacles inherent in rescuing an email. To send a TINS report, consumers must first search their spam folders for messages, then actively identify those they want by clicking a This Is Not Spam button to notify their mailbox provider.

Although a message cannot be rescued unless it’s in the spam folder, senders whose mail was most frequently delivered to spam were the least likely to earn TINS reports.

Senders whose messages reached the inbox more than 97% of the time had TINS rates of 0.44%—nearly triple the average of all other senders.

High TINS rates correlate with strong engagement, too. The greater the percentage of a brand’s messages that get read, the greater the chance that its messages will be rescued from the spam folder.

Forward rates suggested a similar advantage for the best senders: Those with TINS rates of 0.50% were six times more likely to have their messages forwarded.

Email recipients are much more likely to rescue messages sent from financial and insurance senders (0.59% TINS), probably because these are likely to be messages relating to their specific accounts. TINS rates for Citi, Chase, Allstate, and Progressive led all senders in these categories.

In addition, recipients are more likely to rescue messages relating to travel, dating, and jobs. United Airlines, Match.com, and CareerBuilder were the high performers in these categories.

Retailers and social media networks had lower TINS rates of 0.11% and 0.10%, respectively, possibly due to the high mailing frequencies of these mailers, as well as recipients’ tendency not to unsubscribe to messages they no longer want.

However, within the retail category in particular, there were standouts with exceptional TINS rates: Amazon, Target, and Zappos.com. 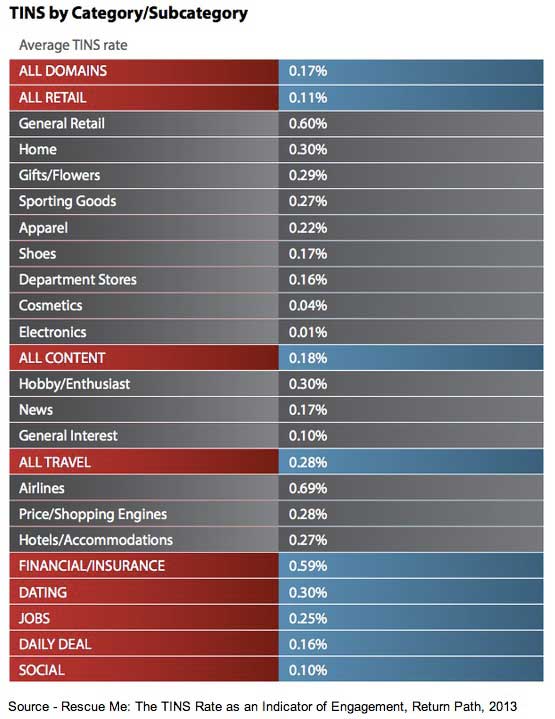 About the research: The study was based on an analysis of more than one billion messages sent to Return Path's panel of three million email users during 1Q13.

Continue reading "Which Emails Get Rescued From Spam Folders" ... Read the full article