The study is based on interviews with some 1,244 arts organizations that have received funds from the National Endowment for the Arts (NEA) in recent years.

Such organizations are even finding that technology has changed the very definition of art: 77% agree with the statement that the Internet has "played a major role in broadening the boundaries of what is considered art."

Presenting and hosting events is a core function of arts organizations: 94% of those surveyed say they host or sponsor in-person events or exhibits, and 29% say they host online events, such as webinars, virtual performances, and virtual exhibits.

Among those 29%, nearly 9 in 10 (86%) say the number of online events has increased over the past several years, and another 12% say the number had stayed the same.

Nearly all leaders of arts organizations (97%) report that the Internet and digital technologies are very important or somewhat important to various aspects of their work.

Among those 97%, most say the Internet and digital technologies are "very important" for "promoting the arts" (81%), "increasing audience engagement" (78%), and funding-related work (65%). 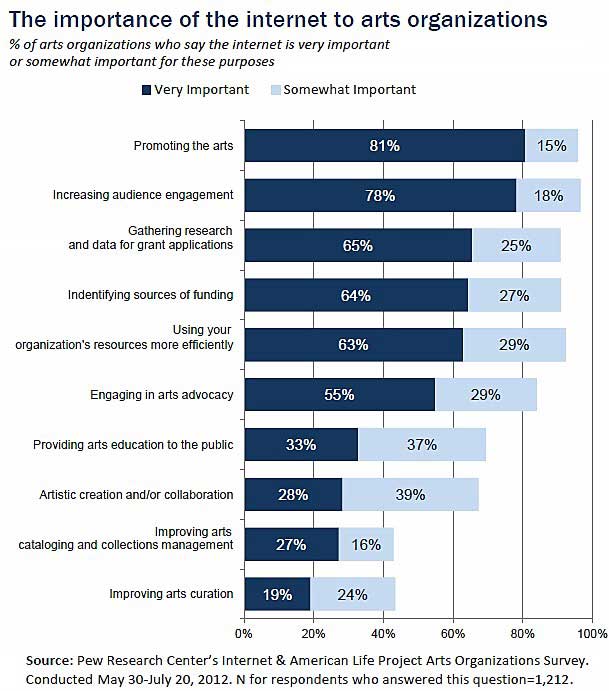 However, those findings are more an indication of the differences in arts organizations' objectives rather than a dismissal of the internet’s value, Pew notes.

Most arts organizations are also using some type of social media:

How Social Is Used

Arts organizations that use social media are using the platforms for a range of activities: 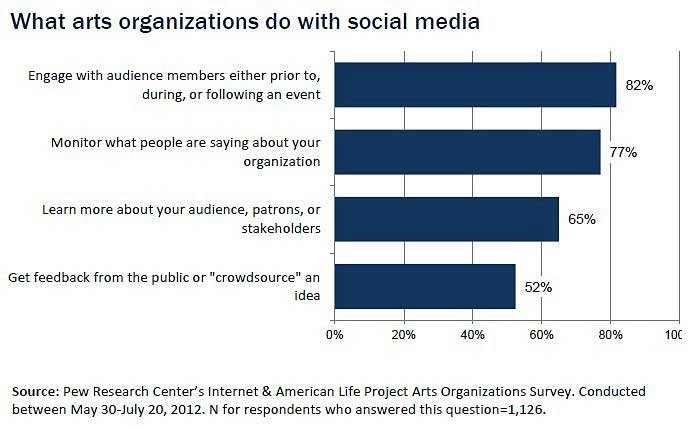 In addition, more than one-half of organizations (52%) have used social media to crowdsource an idea, from possible programming decisions to the best times for sessions or seminars.

Social media are also viewed by many organizations as helping them increase their website traffic (48%), promote events (45%), and build audiences (41%).

Such social platforms are more often described as having a "minor impact" on fundraising (13%), product sales (11%), and public education (16%).

Arts organizations have concerns about technology as well:

One other impact is cited prominently by many of the organizations: 37% strongly agree (and another 34% somewhat agree) that "digital distractions such as ringing cell phones and audience member texting are a significant disruption to live performances."

About the data: Findings are based on an online survey of 1,244 arts organizations that have received funds from the National Endowment for the Arts (NEA) from 2006 to 2011, conducted by the Pew Research Center's Internet & American Life Project among a diverse sample including respondents from visual arts, music, theater, dance, literature, from May 30 to July 20, 2012. Published on January 4, 2013, The report was authored by Kristin Thomson, Research Consultant; Kristen Purcell, Associate Director for Research, Pew Internet Project; and Lee Rainie Director, Pew Internet Project.