People who work in companies that are actively using social technologies tend to value a more humanistic approach to corporate leadership over more traditional "command-and-control" methods, according to the 2012 Social Leadership Survey, conducted by Jamie Notter and Maddie Grant.

The new report examines how companies and corporate leaders participate in social media, and how today's corporate environments, changed by social media, require leadership methods that include "people-centric" principles.

Importantly, researchers polled the opinions of business professionals working in companies that have fully embraced social media. For example, among those surveyed:

Also, many of the professionals surveyed said their companies enjoy some level of executive-level support for social media:

Below, additional findings from the 2012 Social Media Survey, conducted by Jamie Notter and Maddie Grant, co-authors of the book titled "Humanize: How People-Centric Organizations Succeed in a Social World."

Participants were asked to identify the traits they found most desirable in a leader. At the top of list was providing clear direction (75.7%), followed by embracing change (65.0%), transparency (59.4), valuing experimentation and failure (59.2%), and openness to diverse perspectives (51.9%): 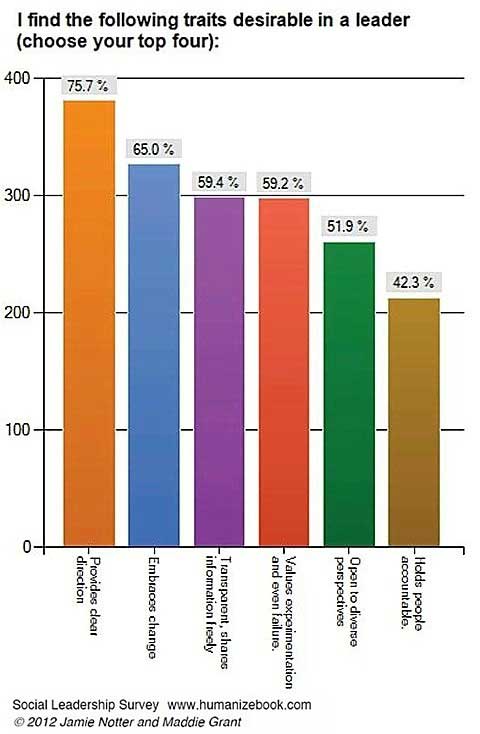