Saving Time and Money Are Key Drivers of Shopping via Mobile

Nearly two-thirds (63%) of smartphone owners expect to be shopping more via their mobile device over the next couple years, according to a survey from Latitude Research.

Moreover, among such mobile devotees, saving time and money are key motivators for shopping with their device:

Women tend to appreciate the aspects of mobile that lead to more "productive" shopping, and they're more likely than men to go mobile because it eliminates waiting in line and because it's something they can do while multitasking, the study found.

By contrast, men are attracted to mobile because it streamlines shopping by offering better-curated options—which means sifting through fewer items.

Below, additional findings from the Latitude study titled "Next-Gen Retail Mobile and Beyond," based on a survey of 900 smartphone owners in the US and UK and, among that sample, roughly 590 tablet owners.

Mobile shopping has seeped into people's everyday routines—from work to home, and everywhere in between: 81% of smartphone owners say because they have a mobile device, they're "constantly shopping."

Surprisingly, 77% of smartphone-only owners say they shop regularly via mobile devices at home, forgoing the larger screen and other niceties of a desktop or laptop computer, while 59% shop while watching TV. 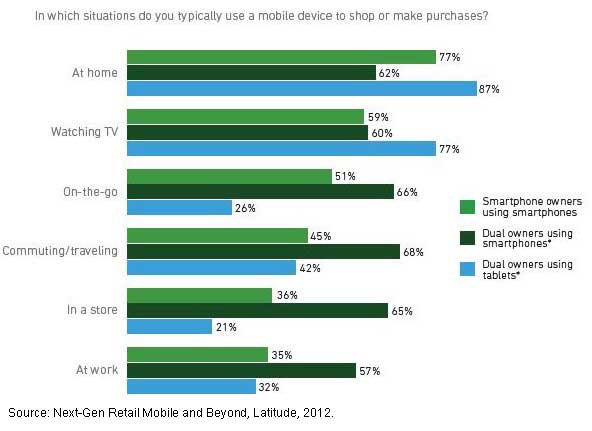 Though dual owners (defined in the study as people who own and regularly use both a smartphone and tablet) prefer tablets at home (87%), they're smartphone power-shoppers pretty much everywhere else.

Moreover, nearly two-thirds (65%) of dual owners have used a smartphone to shop while in a store.

Interestingly, two in five smartphone owners say they have more "me" time, or feel more relaxed, thanks to being able to shop via mobile devices.

What They'd Miss About In-Store Shopping

Asked if they had to do all their shopping online, smartphone owners would miss a few things about shopping in stores and cite the following as those factors they'd miss most:

Convergence of Mobile and Physical Retail

Fully 6 in 10 (60%) smartphone owners have used a mobile device while shopping in store. Among those shoppers:

However, the perks of mobile shopping extend beyond just retail experiences: 88% of smartphone owners say having a mobile device with real-time information makes them more spontaneous with shopping and, in general, more open to discovering new things.

Shoppers also rely on multiple apps to meet their needs. Online retailer apps are the most popular (61%), followed by barcode scanner apps (48%), and coupon or deal-services apps (48%). 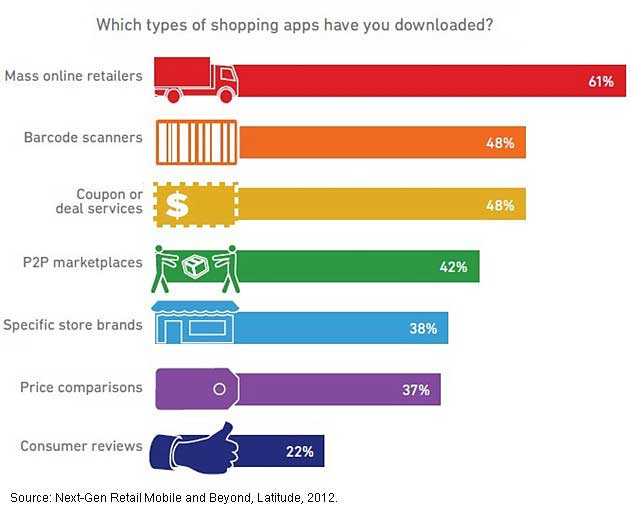 The Thrill of a Good, Local Find

On-demand access to location-aware information (such as Google Maps, Yelp, etc.) has heightened people's awareness of the world around them—as have mobile apps such as Groupon, LivingSocial, and Field Trip.

Overall, some 45% of smartphone owners say they discover more local places, products, and experiences because of their mobile devices. 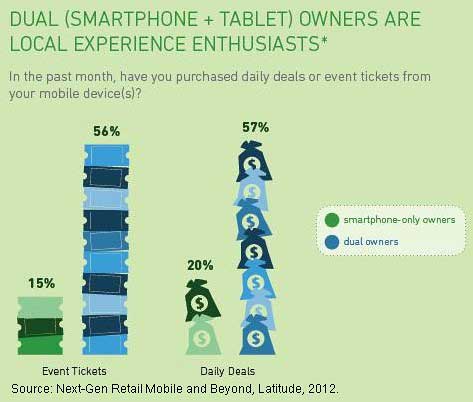 About the data: Findings are based on a survey of 909 adults age 20-59, 50% male and 50% female, residing in the UK (50%) and the US (50%). All participants owned and used a smartphone at least once per week, while 65% also owned and used a tablet at least once per week (making these participants "dual owners"). All participants had at least minimal engagement with mobile shopping; they had purchased digital content via smartphone or tablet and had also used a mobile device to shop for (not necessarily purchase) a physical product or experience.