Why do some video advertisements get millions of online shares, whereas others barely get any?

Unruly recently set out to try to answer that question by examining which television ads from the most recent Super Bowl performed well online, and which did not.

Specifically, the analysis looked at how many online shares (via social media, blogs, etc.) each Super Bowl television advertisement garnered, and what qualities the highest performers had in common.

Among the key findings from the report:

Moreover, only 13% of the 100 most shared ads of all time online (Super Bowl and non-Super Bowl) featured stars.

Unruly identified 18 psychological responses (shock, sadness, etc.) which the videos could potentially trigger. The most shared Super Bowl advertisements all elicited at least one (and often more than one) emotional reaction from viewers. For example, the most shared ad this year, Budweiser's "Puppy Love", sparked very strong feelings of warmth and happiness.

Most of the ads with few shares did not trigger strong emotional responses. In particular, many of the advertisements that tried to be humorous only elicited low "hilarity" reactions from viewers.

"Most of the ads just weren't funny enough to drive shares.... [I]f humor is your trigger, you'll need a pay-off that's worthy of a belly-laugh. If sexy is your trigger, you should be aiming for steam-up-the-windows sexy; a luke-warm bath will not drive people to share," the report concludes.

Moreover, most of the highly shared ads included multiple motivators that appealed to different subsets of viewers. 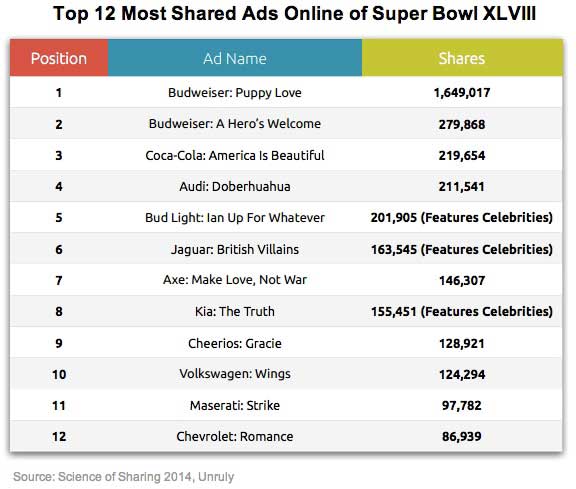 Of course, being shared heavily online doesn't necessarily guarantee that an ad helps to meet the advertiser's goals.

Some advertisements greatly reduced the impact of their investments by not promoting their brand effectively in the spots, the analysis found.

For example, only 7% of consumers surveyed could recall which brand was associated with the Super Bowl ad featuring Bob Dylan (Chrysler). 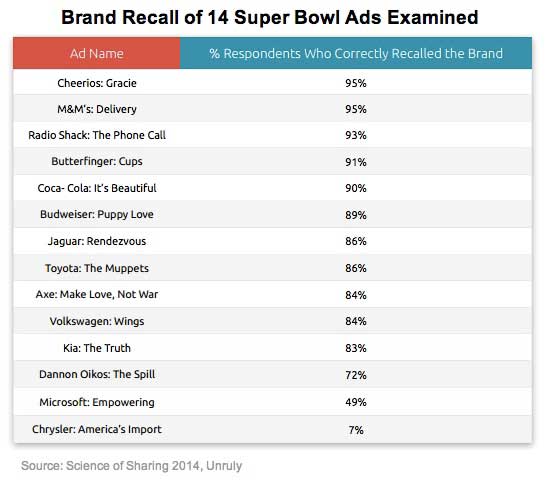