How Optimistic Are Workers About the Job Market?

Global optimism about the job market has reached its highest point in seven years, according to a recent report from Nielsen.

Half of consumers surveyed in the second quarter of 2014 say they think their local job market will be good or excellent in the upcoming year, a 1 percentage point increase from the first quarter of 2014.

That slight increase was just enough of a bump to put confidence in the job market at the 2007 pre-recession outlook level of 50%. 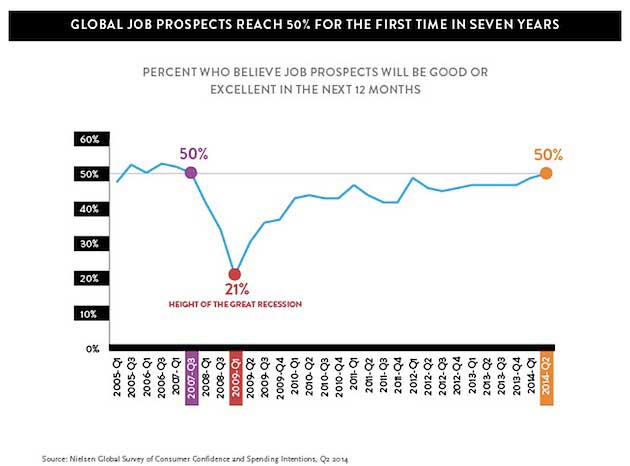 Consumers' positive perceptions toward local job prospects over the next 12 months increased in every region except Latin America during the quarter.

Asia-Pacific respondents were most optimistic overall about employment opportunities: 65% say job prospects were favorable for the year ahead, up from 64% the previous quarter.

The outlook for future job prospects also increased in the Middle East/Africa (42%) and Europe (29%), up 2 and 1 percentage points, respectively, from the first quarter.

In Latin America, 36% of respondents registered positive perceptions of employment opportunities, down from 42% in the first quarter.

The report was based on 2Q14 data from the larger Nielsen Global Survey of Consumer Confidence and Spending Intentions, which polls more than 30,000 respondents with Internet access in 60 countries.

Global consumer confidence increased one index point to 97 in the second quarter of 2014, also marking the highest level since 2007, the survey found (levels above and below a baseline of 100 indicate degrees of optimism and pessimism).

That forward momentum came after a stagnant 2013, when global confidence was stuck at 94 for three out of four quarters.

Confidence was highest in the Asia-Pacific region, which held steady from the first quarter with a score of 106.

Confidence declined in the Latin America (90) and Middle East/Africa regions (93), dropping three points and one point, respectively (you can see an interactive visualization of the data here). 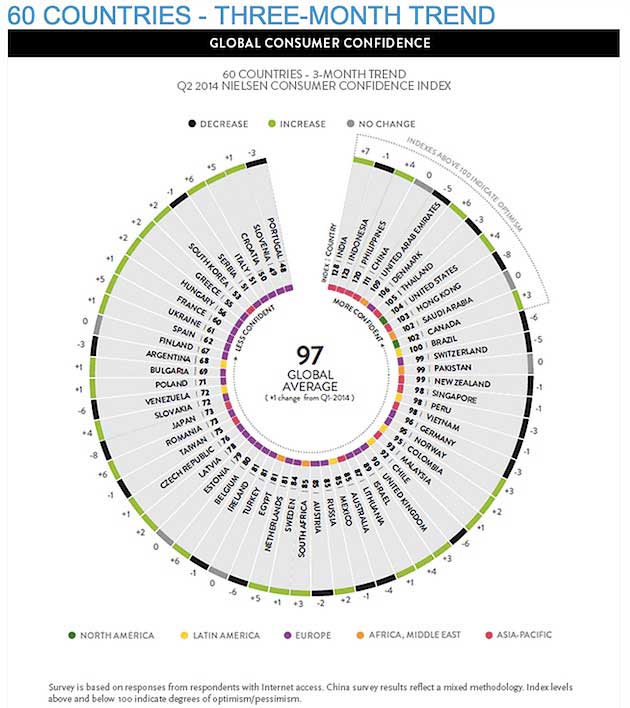 About the research: The report was based on 2Q14 data from the Nielsen Global Survey of Consumer Confidence and Spending Intentions, which polls more than 30,000 respondents with Internet access in 60 countries.

Continue reading "How Optimistic Are Workers About the Job Market?" ... Read the full article