The Volume of Twitter Mentions by Country, Language, and Time

Users in the United States are now responsible for less than half (41.5%) of all Twitter mentions, according to a recent report from Mention.

The report was based on an analysis of 70,000,000 Twitter mentions originating in 234 countries. A "mention" was defined as a reference made—i.e., the use of a Mention-tracked keyword—by a Twitter account about a specific entity or person using a related hashtag, handle, or keyword/phrase.

Though its share has dropped over time, the United States is still responsible for far more mentions than any other country, the analysis found.

Users in the United Kingdom account for the second-most number of mentions on Twitter (9.7%), followed by France (5.4%).

The country with the highest number of Twitter mentions per capita is the Vatican (.4). Not surprisingly, the continent with the fewest mentions is Antarctica (just 7 total in the data set analyzed).

The greatest percentage of positive Twitter mentions are sent from Spain, New Zealand, and Mexico.

English is the most used language for Twitter mentions. This is due not only to a high-volume of tweets from users in primarily English speaking countries—such as the United States and United Kingdom—but also because users in other countries often tweet in English. For example, in the Netherlands, English is used more often in Twitter mentions than Dutch. 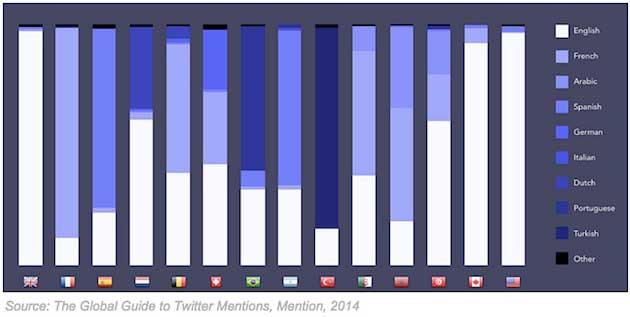 In Europe, Twitter mentions start to ramp up as early as 5 AM (GMT) and peak around 10AM. They then start to drop off around 3 PM. 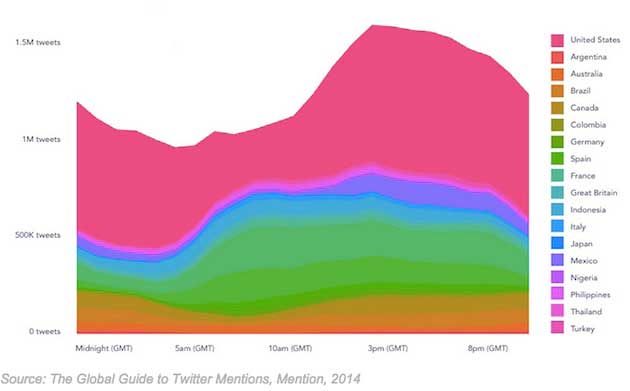 About the research: The report was based on an analysis of 70,000,000 Twitter mentions originating in 234 countries.

Continue reading "The Volume of Twitter Mentions by Country, Language, and Time" ... Read the full article