Are Consumers Willing to Pay for Content From Online Publishers?

Some 40% of US consumers say they currently pay for news, fashion, sports, or business digital content, even though 70% say they access those categories of content online regularly, according to a recent report from CloudSense.

This reluctance to pay for digital media is true even for the "digital native" generation: 45% of the 16-24-year-olds surveyed say they spend money on any sort of digital content from publishers.

Below, additional key findings from the report, which was based on data from a survey of 4,000 consumers in the United States and United Kingdom. 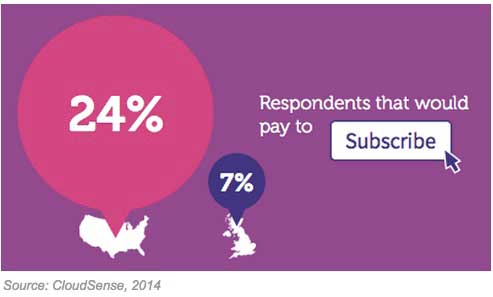 Even those consumers who do currently pay for online content from publishers spend relatively little; in the US, the average weekly spend is just $1.61, and in the UK it is £1.86.