The 20 Most 'Simple' Brands in the World

Global consumers ranked ALDI, the German discount supermarket and owner of Trader Joe's in the United States, as the most 'simple' brand in the world for the second year in a row, according to a recent "Simplicity Index" report from Siegel+Gale.

The report was based on data from a survey of 12,318 consumers in eight countries (the US, the UK, Germany, Sweden, China, India, the UAE, and Saudi Arabia). Respondents were asked to rate brands on the simplicity/complexity of their products and pricing relative to industry peers as well as the quality of interactions/communications (i.e., whether the company is trustworthy/easy to deal with).

ALDI topped the list because of its "clear pricing and a clear offer"—high quality at low prices with a basic, but rewarding, shopping experience.

Google ranked second thanks to its search engine, which consumers view as being "peerless" and "reliable."

Starbucks dropped 26 spots to #43 on the 2014 list, due to its complicated menu and competition from niche coffee shops.

Wal-Mart also tumbled in the rankings, dropping 28 spots to #42.

Below, the 20 most simple brands as ranked by global survey respondents. For the complete list, check out the full report. 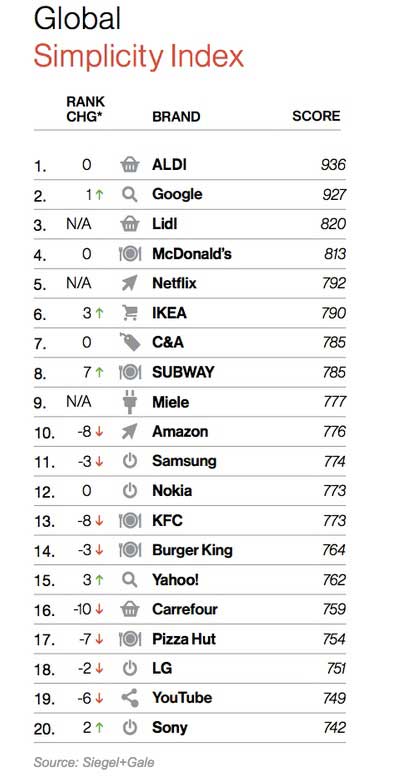 Survey respondents in the United States ranked online retailer Zappos as the most simple brand, followed by parent company Amazon. 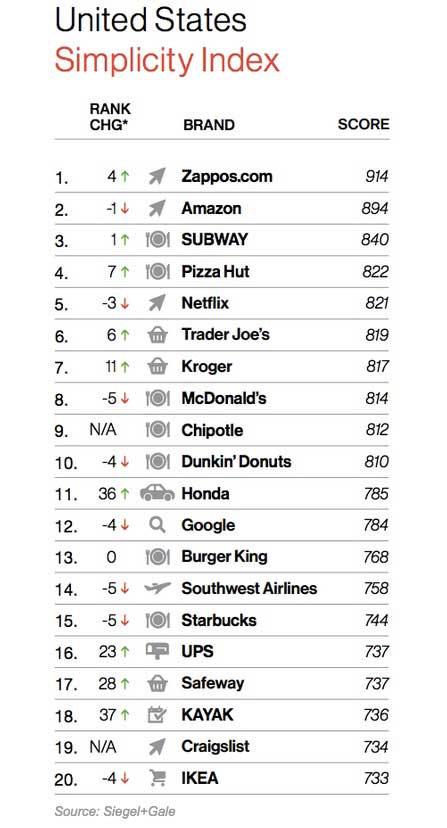 About the research: The report was based on data from a survey of 12,318 consumers in eight countries (the US, the UK, Germany, Sweden, China, India, the UAE, and Saudi Arabia).