The State of Mobile App Usage

Mobile app usage grew 76% in 2014, according to a recent report from Flurry Analytics.

Usage was defined by the researchers as a "session," in which a user opened a mobile application and used it. The report was based on data from more than 2 trillion global sessions that occurred in 2014.

Sessions for every app category increased in 2014, though the big overall year-over-year jump in usage was due mainly to triple-digit growth in three categories: lifestyle/shopping, utilities/productivity, and messaging/social.

Sessions on shopping iOS and Android apps combined spiked 174% last year, the biggest percentage increase of any category. On Android alone, the number of sessions in the shopping category increased 220%.

The release of new Microsoft Office apps for iOS and Android in 2014 helped spur 121% more sessions in the utilities/productivity category compared with 2013 levels. 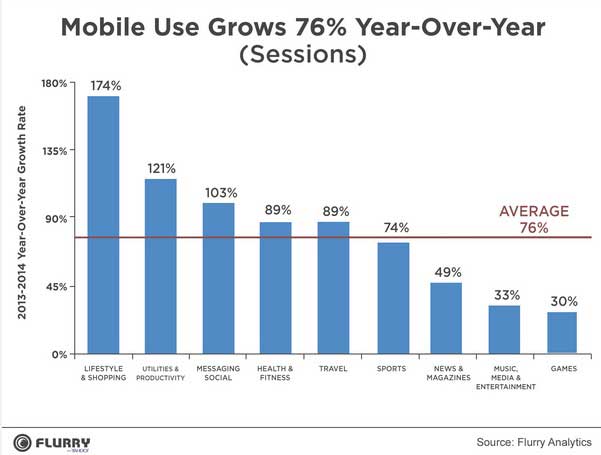 To better understand the jump in sessions in 2014, the researchers did a deep-dive into shopping app behavior on a select number of Android phones in the United States.

The analysis found consumers tend to use shopping apps most while out and about during the day, with usage spiking between 9 AM and noon. A second spike also tends to occur at home in the evenings, between 5 PM and 9 PM. 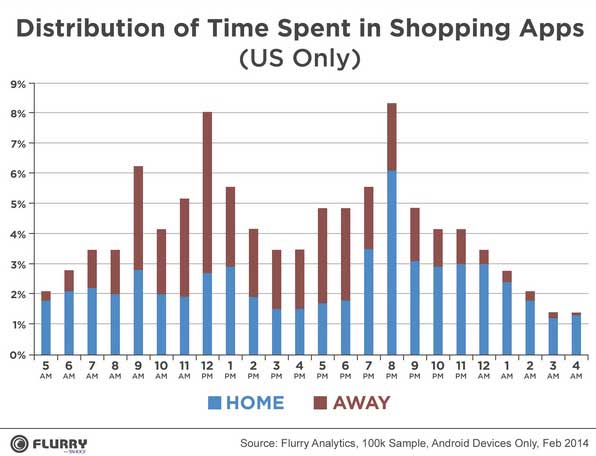