The 25 Most In-Demand Skills on LinkedIn [Infographic]

LinkedIn members who listed cloud- and distributed-computing skills on their profiles were the most sought-after users by employers last year, according to a recent report from the social network.

The report was based on global internal LinkedIn data collected between January 1, 2015 and December 1, 2015. The researchers grouped related skills into categories (for example, "Android" and "iOS" were put under "Mobile Development"), then identified which categories belonged to members who were more likely to start new jobs and receive interest from recruiters. Skill categories that did not meet a specific threshold for membership were excluded from the final list.

Statistical analysis and data mining was the second most sought-after skillset on LinkedIn in 2015, followed by marketing campaign management and SEO/SEM marketing.

Below is the list of the top 25 in-demand skills last year globally. Trends (up, down, flat) reflect changes in ranking from the 2014 list.

Check out the full report to see how results varied by country. 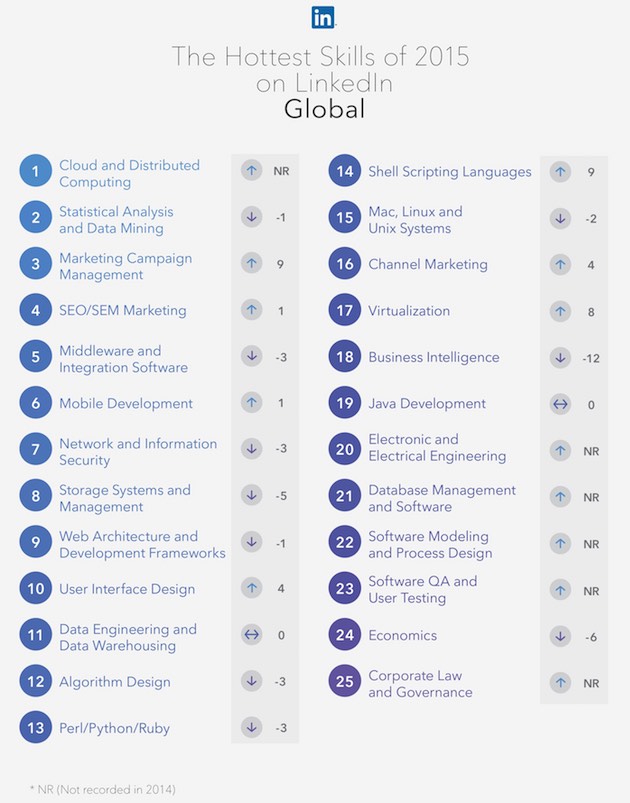 About the research: The report was based on global internal LinkedIn data from January 1, 2015 through December 1, 2015.