To find out, Onalytica looked at 410,454 tweets posted during a 90-day period that included “content marketing" or "contentmarketing."

The researchers examined at various factors, including each user's relevance to the content marketing topic (number of tweets), reach (number of followers), and reference (how often they appeared in Twitter lists). Accounts were assigned a 1 (low influence) to 100 (high influence) score

Check out the full report to see the complete methodology and rankings.

Jeff Bullas (@jeffbullas) has the highest influencer score for content marketing, indicating he has the strongest network and the most impactful discussions about the topic on Twitter. Jay Baer (@jaybaer) ranks second, followed by Joe Pulizzi (@JoePulizzi), Michael Brenner (@BrennerMichael), Neil Patel (@neilpatel), and MarketingProfs' own Ann Handley (@MarketingProfs). 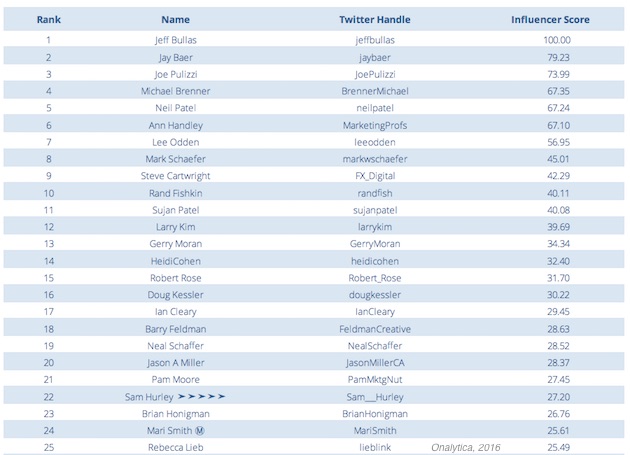 The Content Marketing Institute (@CMIContent) is the brand that has the most impact on content marketing discussions on Twitter. HubSpot (@HubSpot) is second, followed by Inc (@Inc), Moz (@Moz), and NewsCred (@newscred). 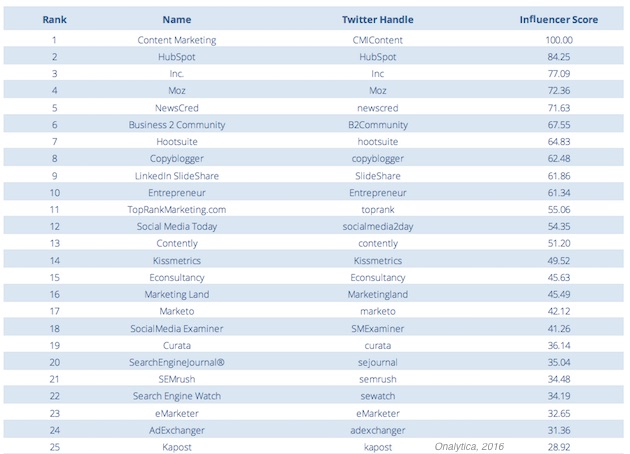 About the research: The report was based on an analysis of 410,454 tweets posted during a 90-day period that included “content marketing" or "contentmarketing."