How Much Work Actually Gets Done at Work?

Most workers say they spend less than half of their time at work doing their primary job responsibilities, according to recent research from Workfront.

The State of Work 2020 report was based on data from a survey conducted in July 2019 among 3,750 people in the United States, United Kingdom, Germany and the Netherlands who are employed by a company with at least 500 employees, work on a computer, and collaborate with other people on projects.

Survey respondents say they are interrupted 14 times each day, on average, while at work.

Workers say they only spend 43% of their day, on average, on their primary job responsibilities. 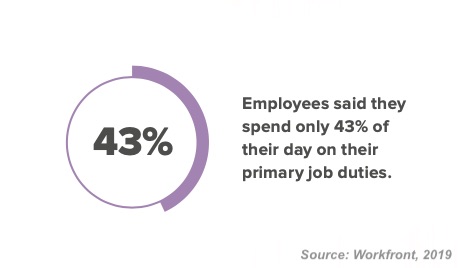