The Reputations of the 100 Most Visible Corporations

Americans say Patagonia, Honda, and Moderna have the best reputations among high-profile companies, according to recent research from The Harris Poll and Axios.

The annual report was based on data from a survey conducted in April 2021 among 42,935 consumers in the United States. A first set of respondents was asked which two corporations have the best reputations and which two have the worst. The results were compiled into a list to determine the 100 "most visible" companies. A second set of respondents then rated the most visible companies on nine dimensions of reputation and those insights were used to calculate each firm’s Reputation Quotient (RQ) score (a score of 80+ is excellent while a score of below 50 is critical). 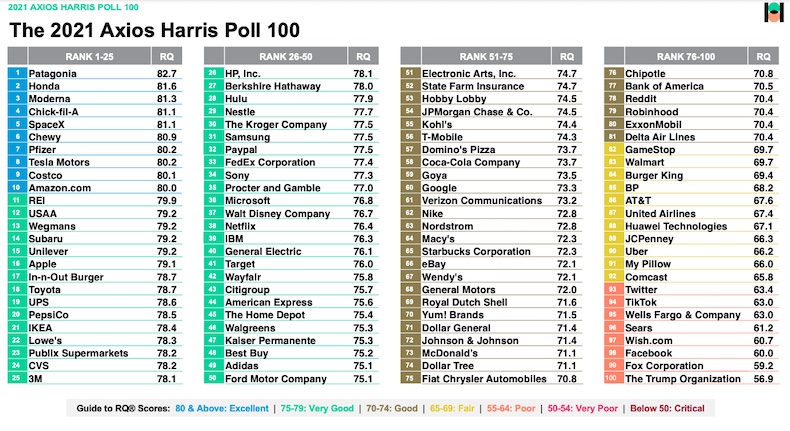 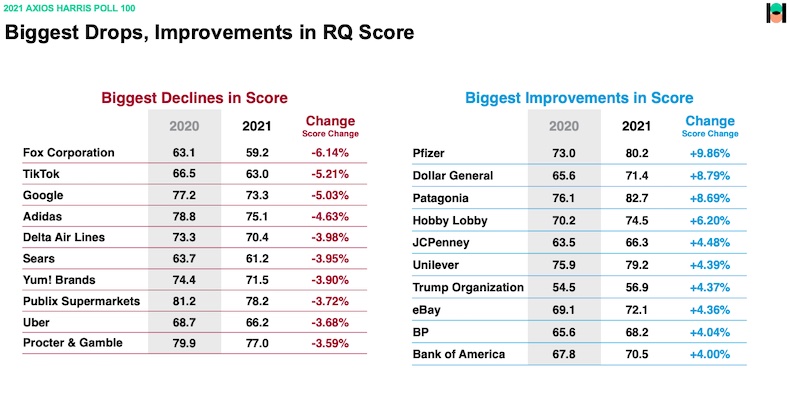 About the research: The report was based on data from a survey conducted in April 2021 among 42,935 consumers in the United States.

Continue reading "The Reputations of the 100 Most Visible Corporations" ... Read the full article

You may like these other MarketingProfs resources related to Branding.

The 10 'Simplest' Brands in the World

Global consumers say Google is the most 'simple' brand in the world, with experiences that are easy to understand, transparent, and honest, according to recent research from Siegel+Gale.

Marketers increasingly believe that brand voice is critical to connecting with customers, and they also say striking the right tone is increasingly difficult, according to recent research from Phrasee.

Americans view the pharmaceutical industry as the least trustworthy industry, though their opinion of pharma companies has improved somewhat over the last year, according to recent research from the Public Affairs Council.

Apple is the world's most valuable brand for the ninth consecutive year, according to recent research from Interbrand.

The Role of Music in Your Brand: Sam Parvin on Marketing Smarts [Podcast]

Music plays a pivotal role in branding and advertising. Sam Parvin of Parvin Music discusses how she guides brands through adopting an audio strategy and choosing music that reflects their brand values.

The Power and Value of Brand: Maggie Gross on Marketing Smarts [Podcast]

Is there a straightforward way to connect brand investment with revenue? Maggie Gross of Deloitte Digital thinks so. She joined the Marketing Smarts podcast to discuss how to calculate the true value of brand.