Facebook's new News Feed look, SXSW tips, tools for managing LinkedIn leads and gathering Twitter data, how-tos for hashtags and social branding, a study on social business, women and teens demographics, an infographic on who won the Harlem Shakes wars, and so much more this week (including your dancing-pony fix).

Pictures to pop across News Feeds. Facebook unveiled its redesigned Newsfeed, which has already begun unrolling across accounts. The sum-up: more prominent imagery and videos (especially if they're shared multiple times), bigger images from apps like Pinterest; a newsfeed that can be toggled by Friends, Interests, or Following (pages you like, people you follow); music streaming and better music pages (adios, MySpace!); and improved consistency on both mobile and the Web. Notably absent from the announcement was discussion about Promoted Posts or Brand Pages. If you don't want to wait, apply for the revamped News Feed.

LinkedIn launches Company Pages. LinkedIn's launched a microsite for Company Pages. Like Facebook brand pages, Company Pages lets companies build a profile and behave as any person would: sharing updates, job openings, and content with the professional community. "The more followers you have, the easier it is to generate referrals and get viral reach for rich content," LinkedIn promises. 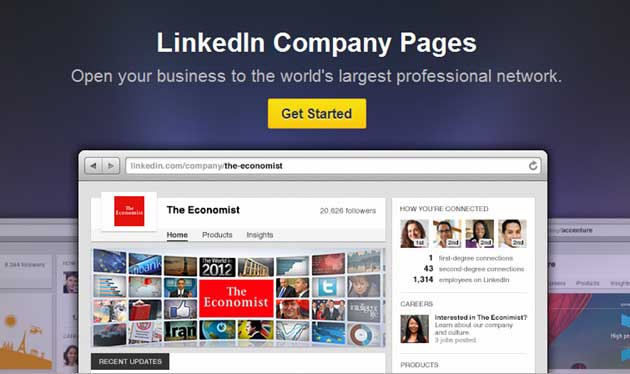 Too many LinkedIn contacts? There's an app for that. FiveHundredPlus does for your LinkedIn what HootSuite did for Twitter. The app creates columns to let you filter contacts then add alerts that remind you to get in touch with them weekly, monthly, quarterly, or annually. You can also track how you've contacted them (online, by phone, etc.) within the app. 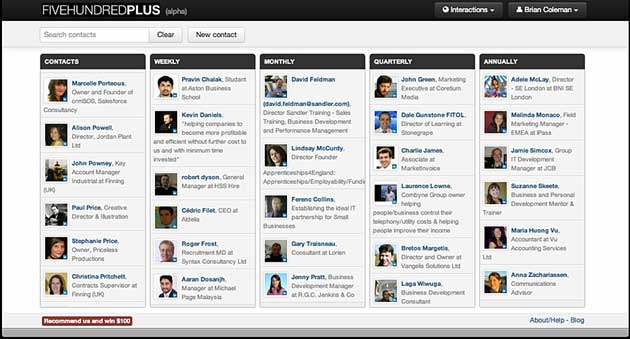 Dance, pony, dance! In viral goodness and hashtag mayhem, Three.co.uk gives us an awesome dancing pony. Its #danceponydance hashtag and ThePonyMixer.com subsite let you share and create your own dancing pony mixes. The infectious video, which hearkens back to the epic Cadbury Gorilla of yore, racked up over 3 million views (and still counting):

Pizza Hut seeks social clout in social-record time. This Sunday at SXSW, Pizza Hut will be holding interviews for its next social media manager. The catch? Each interview can be only 140 seconds long—a symbolic figure gleaned based on Twitter's 140-character limit. Says the Hut: "It's the modern day elevator speech. The time you have to tell a story, engage a customer, or leave a lasting impression on someone socially has shrunk to seconds." Don't bother bringing a resume: The company says it will only look at LinkedIn profiles via smartphone. (Seriously.)

Doing SXSW for the first time? Ten experts tweet tips for rookies. Wear comfortable shoes, prioritize networking over panels (which you can catch later), and go with the flow: Like the social Web, SXSW is all about discovery.

Facebook still losing the teen vote. This article, which went viral among panicked marketers, provides compelling evidence that teens are going cold on the 'Book. (Focus group it yourself: Ask your nearest teen. If she's anything like my sister, she'll go, "Ew, Facebook.") That shouldn't come as a shock: Facebook's the site we love to hate, and teens are quicker about letting go than we are. Our advice? Spread your wings and start exploring the merits of teen-friendly Tumblr, the slightly scary Snapchat, or the panoply of apps proliferating on teens' mobile phones.

The latest social influence contender. Following influence scoring sites such as Klout and Kred, Prollie promises to judge brand and individual influencers with deeper analysis across social networks. "While it's good to have influence, what we're really measuring is who you are and what you love," say co-founders Mike and Red Fabbri. The tool could be great for marketers who want to find niche influencers focused wholeheartedly on one vertical. To wit: if you're tweeting about the best brunches in NYC, Prollie considers you more "influential" if you're also checking into NYC restaurants on Foursquare and posting pictures of food on Tumblr. Or it could just mean you've got a serious obsession with eggs benedict.

Does the CEO know you're tweeting? The Altimeter Group's latest report, "The Evolution of Social Business: Six Stages of Social Business Transformation," uncovers a gap between organizations that execute social media strategies and genuine "social businesses." What's the difference? The former invests in social media without tying it to business goals; the latter integrates social media and methodologies throughout the company for real business impact. Of 700 social media professionals and executives surveyed, only 34% felt their strategy was connected to business outcomes. Half of executives are uninformed, unengaged, and unaligned with their social media strategies:

Who runs the social world? Girls. Weber Shandwick and KRC Research released a report on how North American women—whose social network use exceeds men at 75% versus 63%—do social. On average, they spend 12 hours per week using social media. That's a part-time job! See the complete infographic, and here's a snippet: 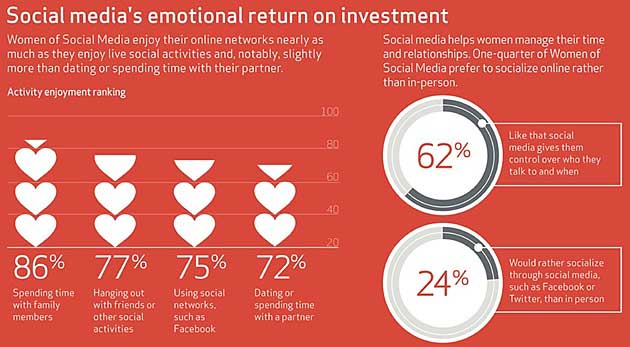 Brand better. Here's how. Nancy Lazarus has compiled five ways to approach social media branding. Make it a thinkpiece for goal-setting: use social for brand maintenance, community building, thought leadership, and more. Each approach is buttressed by an explanation, and usually an illustrative brand example.

Incorporating #Hashtags into strategy. Paul Dunay describes how to use hashtags without spamming Twitter followers. A few tips: limit the number of hashtags you use, keep it simple, and avoid open-ended questions that could get your hashtag #hijacked. It also advocates use of tools like smartsy, which turns products or campaign assets into easy-to-share #objects.

Sponsored posts: not just in your news feed anymore. Tearing a page out of Facebook's playbook, the Washington Post launched Brand Connect, which lets marketers write content that appears in a dedicated box on the WaPo front page. Content types include blog posts, videos, and infographics. Here's a sponsored post example from its first advertiser, the CTIA; it includes a news-style header, video and display ads within the article: 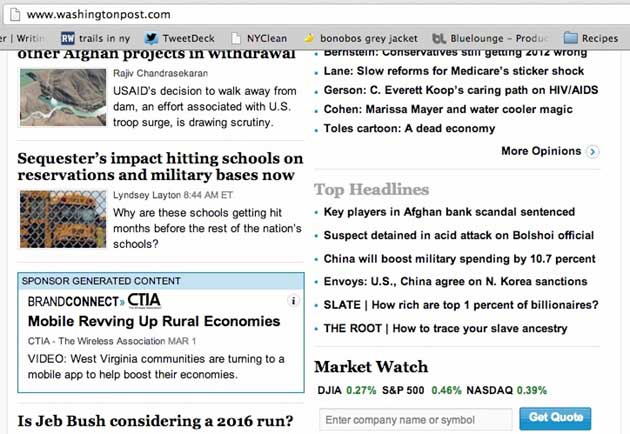 Soup up Instagram with Nitrogram. This just-launched (free!) analytics tool helps you track Instagram likes, hashtags, follows, and more. You can also use it to launch and curate photo contests. 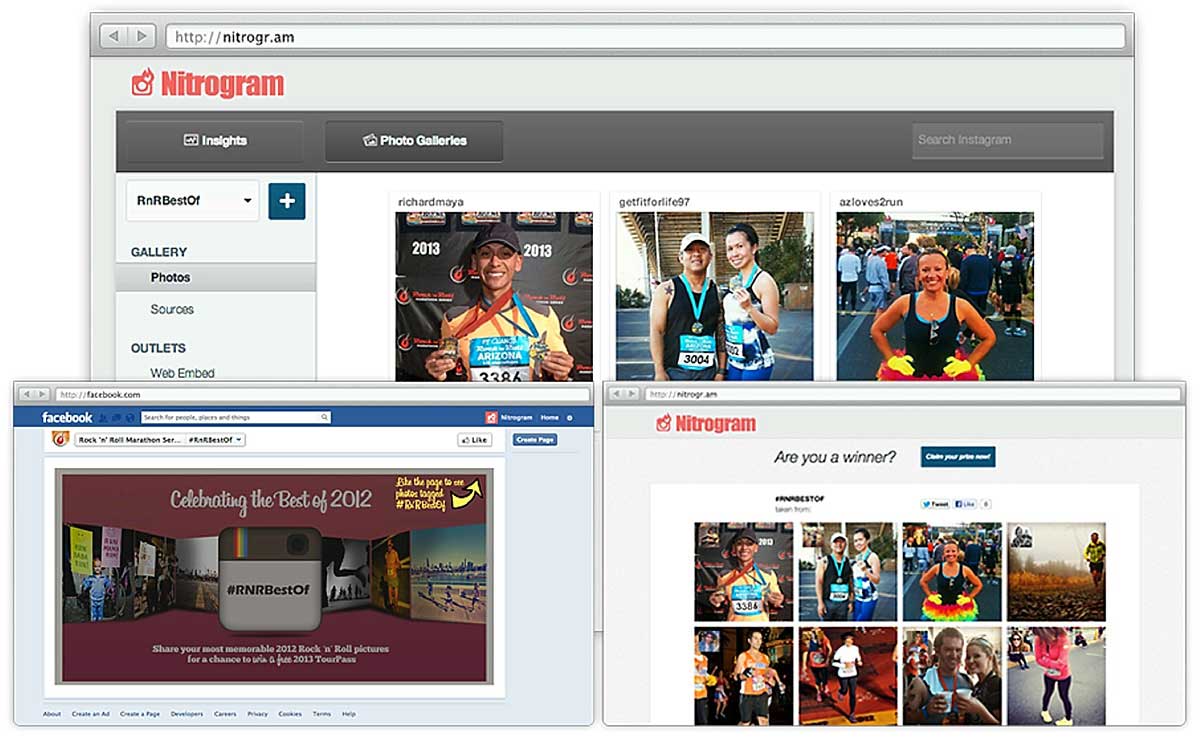 More data for Tweeters. Twitter is extending the amount of social information available to marketers for analysis. Now you can see two years of data instead of just 30 days' worth. The deluge is provided in partnership with Datasift, which gathers, filters, and analyzes social data.

Twitter/Nielsen's Brand Effect goes out of beta. Thanks to Brand Effect, brand surveys are now available to ad partners in the US, the UK, and Japan. Examples of its data include this handy-dandy chart on how Promoted Tweets drive stronger message association (of course): 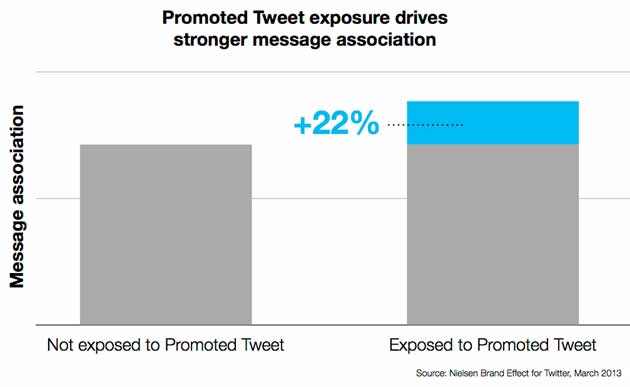 YouTube plugs into music streaming. Setting companies like Spotify and Deezer atremble, YouTube plans to launch a music streaming service—which, like others, will include an ad-based free version and an ad-free subscription one. Now, who said video killed the radio star?

Does Facebook make you pay to play? Facebook addresses data-backed claims by brands who've seen their posting visibility plummet, then rise again with sponsoring, since its algo change. The company writes: "First, in aggregate, engagement—likes, comments, shares—has gone up for most people who have turned the follow feature on…Second, a few data points should not be taken as representative of what actually is happening overall. There are numerous factors that may affect distribution, including quality and number of posts." Needless to say, marketers remain unconvinced.

Google Plus: leader in content legitimacy? Greg Boser of BlueGlass Interactive explains why Google+ may finally throw some weight around in 2013: "Google Plus was never intended to be the next Facebook or a Twitter killer. Rather, it's a platform for making connections, building authority and credibility, and ultimately, establishing and determining true authority beyond links." The key to this is Google Plus Authorship, which ties your content to a fixed identity. Boser advises taking time to build a Google Plus profile and using it as a content-sharing platform.

Let's wrap with something fun: an infographic from Unmetric and the Shorty Awards on how the Harlem Shake shook up Facebook and YouTube. Of the 30+ brands that Shook, a handful achieved viral status, including Pepsi, Red Bull, and Top Shop. (We're a little bummed though for those Aussie miners, who were fired after posting their own underground Harlem Shake. Sigh. That was a goodie.) Anywho, happy socializing!