It's a bad week for seals but a great week for dancing. One dancer reveals how she tipped her video up the viral charts. We've also got a handy tip on producing better Tweets, a how-to for LinkedIn's Sponsored Updates, and lots of exciting Facebook news, including its upcoming TV-like ads, embeddable Facebook posts, and more. Skim to keep the sharks at bay!

It's a bad week to be a seal. In branded viral video, Shark Week hit No. 2 on the charts (behind Geico's Hump Day) with "Snuffy the Seal," a fake news report that... clearly illustrates the tagline. The element of surprise, its dark humor and an already-strong "Shark Week" fanbase gave it bite. (Forgive the pun. It had to be used!)

Dancing up the charts. Early this month, user Karen X. Cheng posted a video of her efforts to learn to dance in one year. The video went viral with over 3 million views, and not without effort: here, Karen details what she did to raise her video's viral likelihood: "First, I posted to Facebook/Twitter, and submitted it to social news sites like Reddit and Hacker News. I personally asked many of my friends to share it. I tweeted it at well-known dancers. I emailed bloggers who had covered other viral dance videos." But of everything she did, Reddit paid off the most. Read these tips on ensuring frontpage Reddit visibility: It's worth it, even if dancing isn't your forte!

Embed Facebook posts for more traction. Facebook is releasing a feature that'll let publishers embed their public status updates onto websites or blogs. Once it's embedded onto your site, users can interact with your post (comment, liking and sharing) as though they're on Facebook—giving you a chance to increase engagement without relying too heavily on Sponsored Posts (or FB's fickle algorithm). Authors' pages can also be Liked (bonus!). For now, just a few publishers have access to it—CNN, Huffington Post, Bleacher Report, People Magazine, and Mashable—but Facebook promises "broader availability" soon.

And they said TV was dead. This just in! Loath to let Twitter dominate boob-tubery, Facebook's planning to sell TV commercial-style ad space for up to $2.5 million a day, sources say. The spots will last 15 seconds and will be extended to advertisers later this year. Minimum plans start at one full day and can be targeted to users based on age and gender. Tackling TV? Not a bad plan for FB: Nielsen found it draws more 18-24-year-olds at primetime than any of the four major TV networks... and a recent Trendrr report found that Facebook activity for users already watching TV is five times higher than for all other social networks combined. Eat that with your popcorn.

LinkedIn's "Sponsored Updates": a how-to. Last week LinkedIn announced Sponsored Updates, which lets marketers promote any post (including presentations and videos) from their Company Page directly to specific people in their newsfeeds. (It's a B2B marketer's dream.) HubSpot, which was part of the pilot, provides a run-through on how to set it up for optimal use. (It's also got a great screenshot on how metrics are tracked; they include clicks, impressions, uniques, CTRs, CPCs, and CPMs over different timeframes.) Dig in! 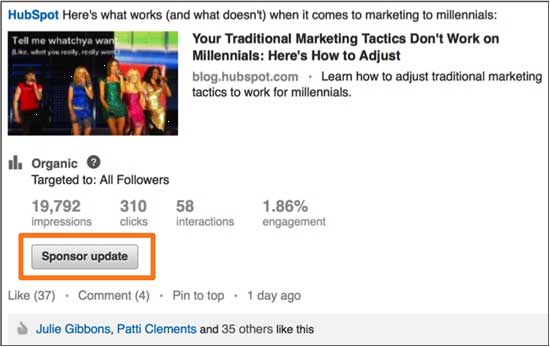 Pinterest tips that AREN'T from Sephora. Agency Current 360 explains how it used Pinterest to successfully market RELAX Wines, which wanted to target female Millennials. Like Sephora, its boards are divided by lifestyle topic: recipes that pair well with wines, and entertaining and hosting tips. To ensure the content doesn't get watered down, Current 360 followed a strict 80/20 content strategy: 80% of shared content comes from other sources, and 20% comes from the brand. It also ensures Pins are seasonally relevant, and checks analytics to ensure its efforts lead to sales. 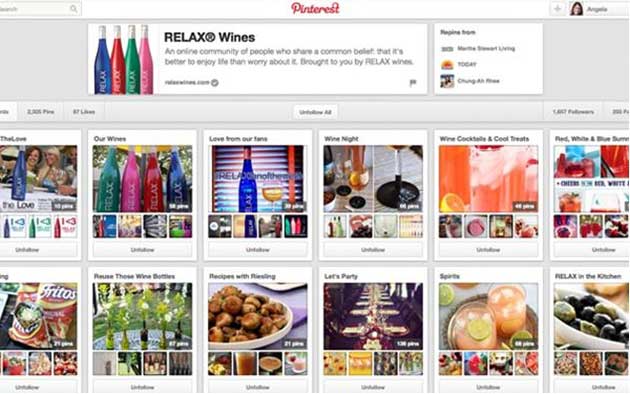 Get it right at the right time. "Return on relationship" champion Ted Rubin provides four examples of companies scoring high in social customer service. Whatever your business, there's something to learn from Amazon, Walgreens, eBay and Netflix. Our favorite example is eBay's data-driven "Feed," a homepage feature that provides a bird's-eye view of its 350 million items for sale based on your browsing and purchasing history. You can also "follow" categories. To optimize it, eBay tore a page out of the Pinterest playbook: "Big, rich photos really matter," says CMO Richelle Parham. "That's why the Feed is all about creating a visual environment of the things you love."

A Netflix for all kinds. Netflix launched a feature that lets up to five people create a profile on the same account—ensuring your queue is kept separate from your brother or mother's. Doing so also enables Netflix (and its advertisers) to better target based on people's unique watching habits. Users can also connect their profiles to Facebook, making it that much easier to share your own preferences with your friends' (and vice versa).

Uh-oh. Google Alerts broken? Google Alerts, a staple for marketers who want to keep track of what's being said about their brands on the Web, is slipping. Kashmir Hill explains why on Forbes and points us to an oldy-but-goody VentureBeat post that lists free and paid replacements. Talkwalker is our personal favorite.

Highlight reels made easier. Everlapse is an iOS app that lets you make time lapses out of your Instagram photos. The Next Web explains how you can use it to produce highlight reels: plug in your brand's Instagram account, and Everlapse will create a reel based on your top 20 photos, determined by Likes and put in chronological order. (Don't worry, you can edit once it's done.) Consider using it to promote a recent brand event, or just to share what people Like best about you.

Not getting Twitter? Start surfing the Faves. One of the biggest challenges of mastering Twitter is navigating the vast amount of information that passes through your stream. How do you know what'll really stick? One of the best ways to do it is to surf peoples' "Favorites" section, which you can access by clicking "Favorites" on the left-hand side of their profile pages. The WSJ talks about how "favoriting" tweets is on the rise and is being touted as a more discreet "Like." One company, Favstar, built a business on Favorites: Join its free community to see rankings of tweets based on the number of Favorites they get. If nothing else, it'll teach you how to banter. 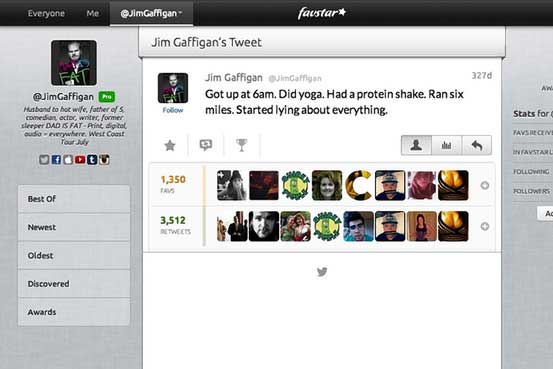 The seven faces of social media users. We'll wrap with a little social anthro. Based on a ReachLocal infographic about seven social media fan types, SocialFish describes them more deeply and illustrates how you can reach them. Learn to tickle the engagement-shy Quiet Follower, bait the Casual "Liker," titillate the Deal-Seeker, and maybe even detract The Negative Ranter. 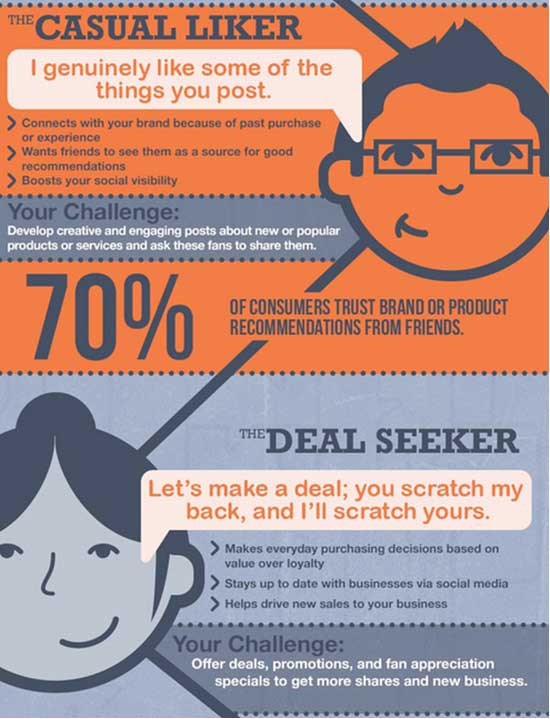