Catch the first-ever WhatsApp music video (by Katy Perry), Twitter’s latest social TV moves, a GIF library from Reddit, the latest community management gaffe... this time from Domino's, and when to Vine vs. when to Instagram. Also, if you're a Breaking Bad fan, we'll wrap up with a treat just for you. Skim to break social.

Musical emoticons. Katy Perry's made the first-ever WhatsApp-based music video. (WhatsApp is a text-messaging service that lets you text people anywhere in the world for free.) The video's raised 7.3 million views, and there are probably just as many emoticons in the video's four minutes:

When to Vine and when to Instagram. Anish Patel explains when you should use these microvideo platforms. Vine's great for new product features, how-tos, video teasers, and event invitations. You also get the benefit of live customer interactions. Instagram video is great for promotional campaigns, video series, and commercial-style videos.

Make a typographic statement. Looking to get noticed in an endless stream of raw data and newsfeeds? Panix's unicode text converter lets you copy and paste messages onto Facebook or Twitter with different font types, plus bold and italics. Simply write out your message, then copy the style you like and paste it into your status box. It's a bit gimmicky, so make the message count!

If you squint, they look the same. Domino's Pizza earned the ire of social medialytes this week by mistaking a compliment for a complaint. On the brand's Facebook page, customer Jeaneth Manzaniita Tavares called Domino's "The Pizza Ever!" and added, "Keep up the good work"—complete with happyface emoticon. Moments later, Domino's replied, "So sorry about that! Please share some additional information with us at bit.ly/dpz_care and please mention reference# 1409193 so we can have this addressed." What went wrong? Instead of treating social media like a human forum, it's relying on auto-responses written by PR folk. (Domino's later tried playing off its gaffe by saying, "No, we meant we were sorry it took Jeaneth so long it took to enjoy the best pizza ever." Awkward. Couldn't you have just said sorry?

Spokesperson Chris Brandon later made contact with Digiday to make a real-person apology for the brand: "Real human beings make real human mistakes sometimes, and this was one of those times. It was an isolated situation in which one of our people simply goofed up. It happens. We were all, naturally, a little bit red-faced by this—but we've already moved on." 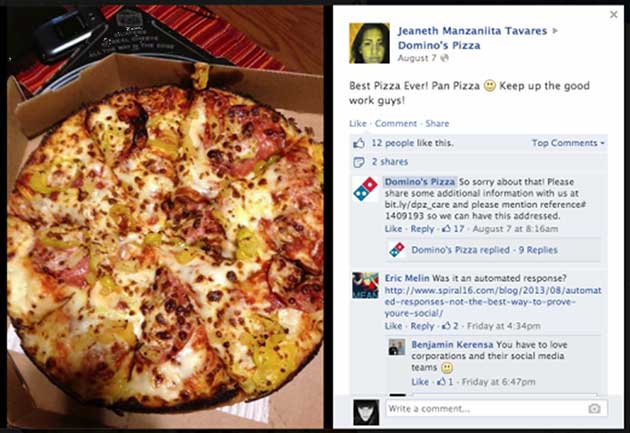 React more GIFfily. Sometimes the best way to say it is with a GIF; in a text-based social environment, it's the only way to get your Incredulity Face across. To help you better communicate visually, we give you a full library of tried-and-true reaction GIFs from Reddit. Use it to inspire your own GIF-making; it's a goldmine of minds blowing. To save one, click on the image, then click on the "Settings" widget in the upper right-hand corner. You'll have the option to download your image in full resolution. (And if you want to make your own, here's how.)

More TV on Twitter. Twitter's testing a feature where links to the Twitter pages of popular TV shows appear at the top of your Timeline, in addition to related Tweets and show information. The feature was discovered by Twitter user ASG, who caught the new feature on his mobile app. Thanks for the tip, @BlogInNYC!

In other Twitter news, apparently its Promoted Trends feature costs less in Latin America. So if you're looking to test on the cheap, now might be a good time to call in a LatAm favor. 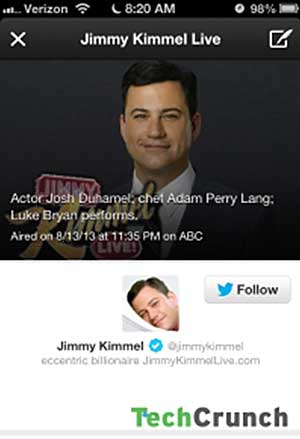 Hello, natives. Livefyre, which provides social content tools like commenting, live blogs, and livechats for publishers, has [launched a Native Ads group to help publishers produce their own native advertising. "They struggle to do native campaigns because it takes so much effort from them. We remove all that burden," says founder Jordan Kretchmer. For example, for the E3 video game conference, it created Playstation-sponsored social hubs for IGN and Joystiq. These aggregate user comments from Playstation's social media channels, in addition to tweets, Instagram photos ,and Vines from conference attendees. But in addition to those services, you can get sponsored polls embedded in your articles. The objective? Drawing relevant sponsored content to people who wouldn't normally see or interact with it. Here's its IGN hub: 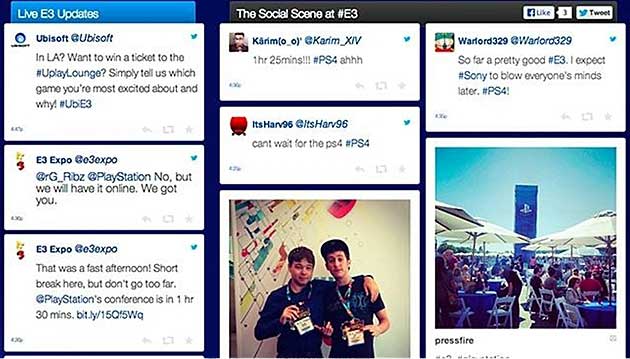 Soup up your social analytics. Social analytics firm NUVI released an upgrade to its social media visual intelligence platform. The upgrade includes group monitors, which lets you gather Twitter followers into one group for analysis; Facebook integration; and monitoring of big mentions in the social landscape. Here's the skinny on what Nuvi's all about: 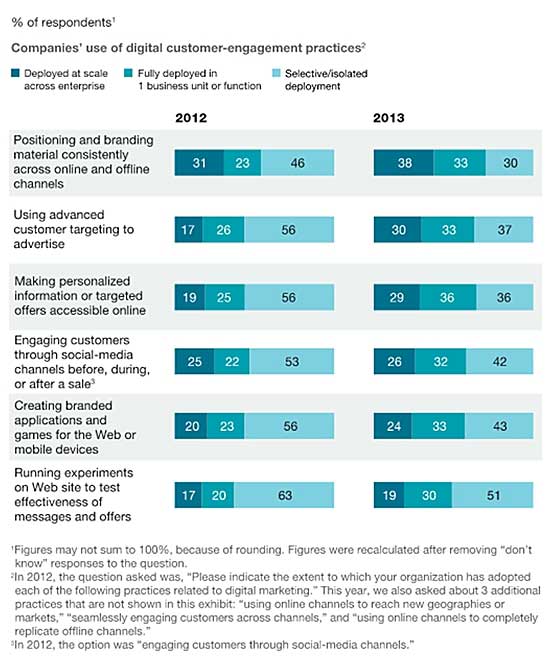 CEOs are also getting more involved and are more likely to sponsor digital than they were in 2012: 55% are either supportive and directly engaged in digital initiatives, or supportive and sponsoring them, versus 46% last year; 30% of respondents also report having a "chief digital officer" in the C-suite.

Rainbows for the Olympics. Russia's making waves, and not for the best reasons. A few months before the 2014 Winter Olympics in Sochi, athletes are already taking a big stance against Russia's new anti-gay laws. Track and field star Nick Symmonds stood up as the first athlete to criticize Russia while competing on its soil, dedicating his silver World Championships medal to his gay friends. And Buzzfeed's highlighted a passel of LGBT athletes from previous Olympics making statements of their own. More proof that the social world is a strong enforcer of very clear social laws: Do right by your fellow man, or else you'll go down in newsfeeds as the brand (or in this case, country) on the wrong side of history. 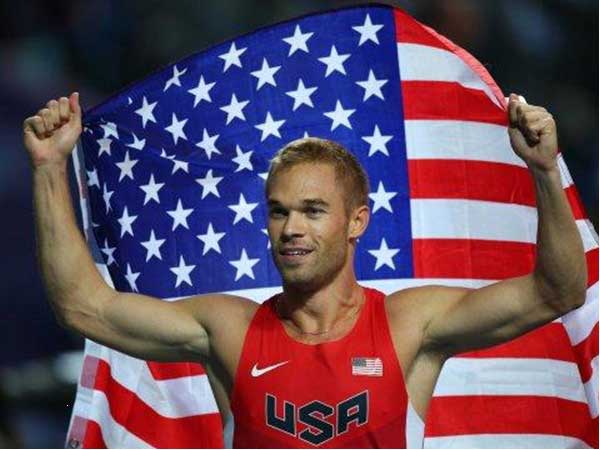 Mobile Facebook users will soon rival mobile tweeters. An eMarketer study sheds light on the mobile use on our two favorite social networks. Twitter users have a 28% mobile penetration rate, but that figure's slated to fall because of the growth of overall mobile social networking—particularly on Facebook. Dun dun duuuuuun. 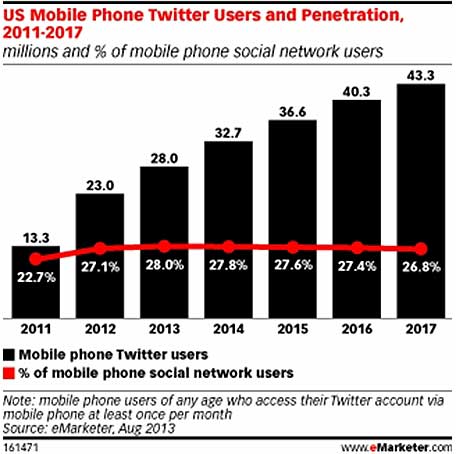 How to get a promotion. Sometimes marketing is so much like alchemy that it isn't easy to justify all the hard work you've been doing. That's why HubSpot's put together advice from top execs to help bump your salary and status. Tips include helping salespeople out and experimenting with new solutions, but we're especially keen on these marketing metrics that CEOs like most and this template that helps you compile those metrics into a presentation. Never say we don't have your back.

Dancing to beakers and buckets. Breaking Bad returned Sunday for its final season. (We hope you got all your bets in for how things end.) If you're a Breaking Bad fan, you'll enjoy this wrap-up: YouTube star Andrew Huang's created a video of himself playing the theme song, using equipment you'd typically find in a meth lab. Creativity knows no inhibition.