Which social networks drive the most engaged referrals? Do Facebook ads make sense? Are seniors taking to social media? Get the answers to those questions, plus the scoop on Twitter's Mesagraph buy and Evian's Spiderbaby. Skim to shoot Web...

(Super) baby love. This week in viral, Spiderman gets a glimpse of his own inner child... with a boost from Evian. It's been years since the dancing babies headlined Evian's "Live Young" campaign, and despite the eyerolls on a new spin on the old theme, Baby Spidey has appeal. The video's scored nearly 1.2 million views since its publication on April 1.

We can be heroes. For the World Cup, Pepsi celebrates the playful, soccer-loving spirit of Rio with an ad that includes interactive options that make viewers decision-makers in the story. We like the incitement to engage versus watching passively... plus, we're suckers for anything that includes a Janelle Monae cameo and some nostalgic guitar-strumming.

The definitive guide to April Fools. April 1 is a scary day to be online; every news article, product launch, or video has to be scrutinized with care. (And yes... Google did get us with Shelfies.) Buzzfeed provides a definitive guide to branded April Fools Day pranks, from the Google Maps Pokémon Challenge to Southwest's Service to Mars to Vegemite's Energy Drink. Don't miss a single schadenfreude-packed moment! It's the one time of year when brands are almost obliged to show us whether they have a sense of humor.

Mesagraph and Twitter join hands. Continuing its quest to gobble up any social TV analytics-related service that hits critical mass, Twitter purchased Mesagraph, a social TV analytics firm based in Paris. Clients include Canal+, France Télévisions, M6, TF1, and marketers such as Microsoft. Per Mesagraph, "Twitter is the platform where the vast majority of public Social TV comments happens," as well as "an immense source of opportunities for advertisers to reach their audience creatively and efficiently." The team will join Twitter UK and work with networks, agencies, advertisers, and other partners, presumably to punt Twitter's ad services. 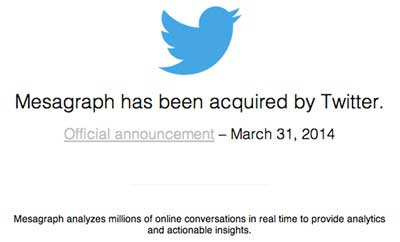 YouTube: rippin' one out of the TV playbook. To attract more ad spend, YouTube took a lesson from TV Land's Upfronts: It will now promote its top 5% most popular programming to marketers and advertisers who commit quickly. In exchange, they'll be guaranteed high viewership, confirmed by Nielsen, YouTube's third-party numbers-cruncher. The more things change, the more they stay the same?

Need wider reach for Facebook updates? App developer im.mk released a Subscribe button that brands can put on their websites to get people to agree to receive Facebook notifications. The button can also be used to provide direct links to e-books, event RSVPs, and voucher codes. The button is available on its Embed Social platform. 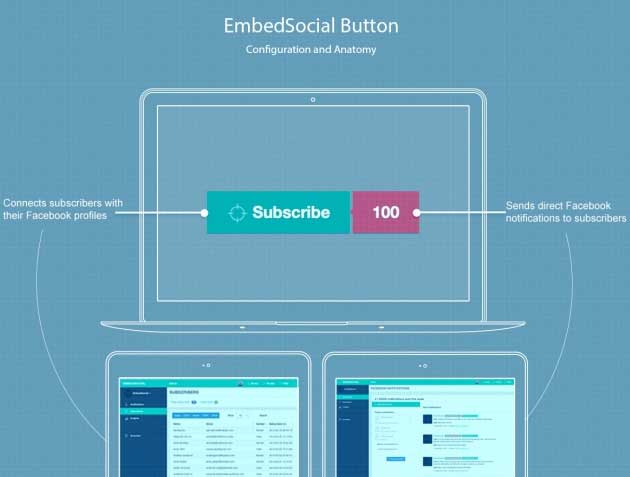 Target the Lookalikes. This account of Facebook's recent ad updates explain why Facebook advertising makes sense for e-commerce businesses. It takes special care to explain Lookalike Audiences, a new targeting feature that lets you target new customers based on their similarity to people who've already made purchases on your website.

Not everyone's thrilled with Facebook Ads, though. Eat24 wrote Facebook an over-the-top break-up letter, detailing all its frustrations—with requisite GIFs:

Give your local senior a Poke. A Pew report finds that seniors (age 65 and up) access Facebook more often than previously thought: 46% use Facebook and other social networks; 52% of senior females and 39% of senior males use social networks. A dropoff occurs after age 80: Just 27% of them accesses social media. As for Twitter? Don't even ask: Just 6% of online seniors, or 3% of seniors overall, use it. 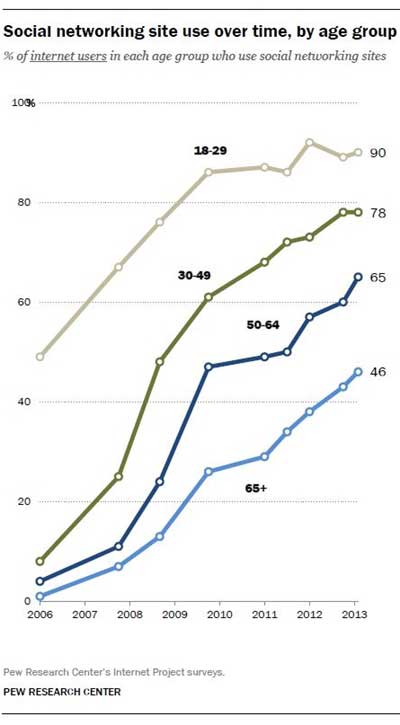 Is there an expert in the room? A report by Nielsen, commissioned by inPowered, finds that expert reviews are the most influential digital content for purchasing decisions. The study tested three different content types—expert reviews, branded content, and user reviews—to see how each affected brand familiarity, likeability, and purchasing consideration, and expert reviews boost the latter by 11%. Likeability also gets a 12% boost, and familiarity rises 15%. Those numbers may seem small, but they leave competitive content types in the dust: Expert reviews lift purchasing consideration 38% more than branded content and 83% more than user reviews do. 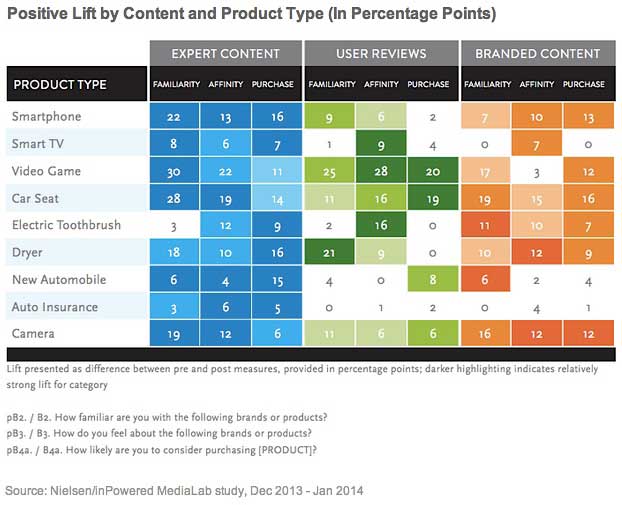 Who drives the most engaged social referrals? LinkedIn, YouTube, and Google+, says Shareaholic. YouTube drives the most engaged traffic: The longest visit duration (227.82 seconds), the highest pages per visit (2.99), and the lowest average bounce rate (43.19%). And while Google+ and LinkedIn drive the fewest social referrals, their visitors are the best-behaved: G+ users spend over 3 minutes diving into their friends' content, and visit 2.45 pages per visit, bouncing just 50.63% of the time. Meanwhile, LinkedIn users spend 2.13 minutes on links they click on and view 2.23 pages per visit, bouncing 51.28% of the time. At fourth place are Twitter and Facebook. Both see visitor bounce rates of 56.35%, but Twitter's pages per visit are slightly higher (2.15 vs 2.03); Facebook users spend more time on a site post-click: 127.44 seconds versus 123.10. 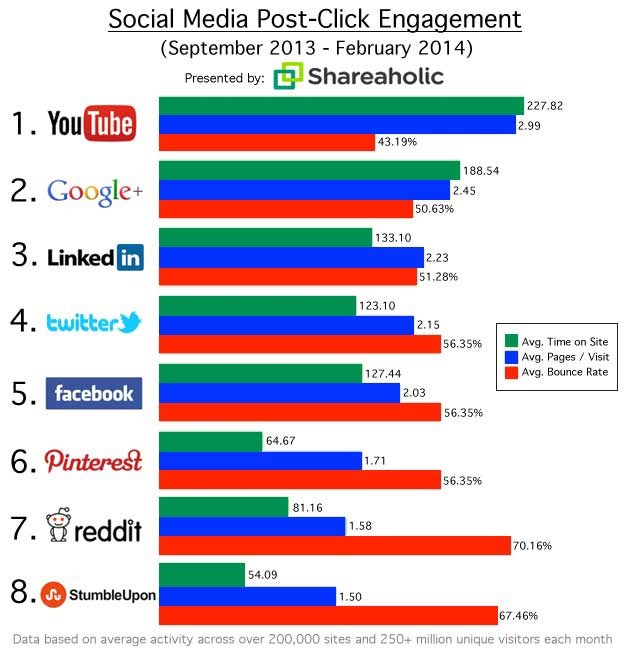 Interested in digging deeper? Check out what posts get shared most on Facebook, by KISSmetrics. Pro-tip: Use thoughts people can universally identify with. Nicely illustrated, of course. Bucket list posts are also weirdly popular. 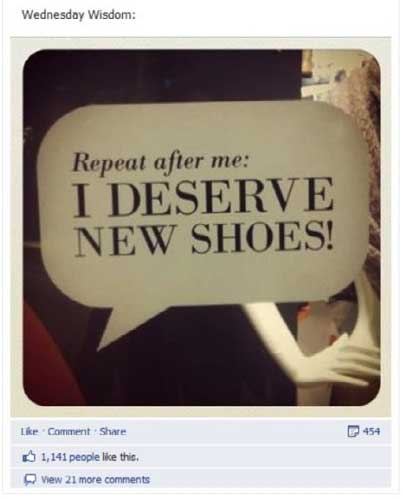 A boost for your LinkedIn profile. LinkHumans.com released a super-detailed, easy-to-read infographic that explains how to improve your LinkedIn profile (replete with examples!). Tips include addressing your target audience's needs in your work experience, and using additional features like Projects, which serve as a kind of portfolio. 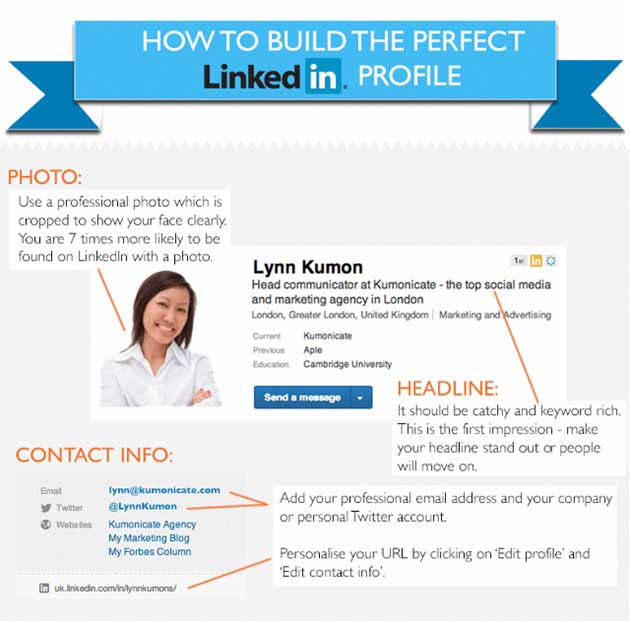 Try fighting the funk. Gawker is banning "Internet slang" from its pages as part of an effort to "sound like regular adult human beings," says editor Max Read. From here on in, terms like "epic, pwn," and "derp" are no longer permitted. The strikethrough font, favored to denote a change to an article, has also been banned. The move highlights the ever-changing nature of Internet language: If you want to be universally understood, now and over time, resist the urge to write copy in Internet slang (or SMS slang, for that matter). But as one commenter couldn't resist saying, "This guy sounds like a derpy boss and he loses the Internet."

To wrap on a high note, consider that not all Web culture mashups are bad. Artist Nastya Nudnik's "Emoji Nation" weds classic art to all kinds of pop iconography, and the work comes out poignant, wedding our love affair with past great works to the ephemera of today. Enjoy it! 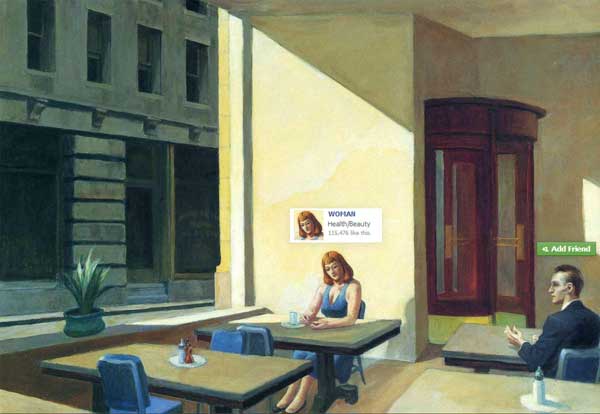