Find out how Oreo turned snack hacks into a contagious campaign. See why fewer brands will be asking you to "Like" anytime soon, possibly the worst social media gaffe to date, how Esquire gave users a real reason to love 'em, and what video had every parent with an Internet connection crying this week. Skim to stay smart!

Who can turn down Oreo-coated chicken tenders? As a wink to people who've been using Oreos to improve home recipes for years (and we're talking about more than crumbling them into milk), Oreo's launched a Web series featuring top chefs and their snack-hack secrets. Each recipe is simple enough that anyone can try one at home, and just as well: It's got us hungry for some pretty weird things. Users can submit their own inventions to Oreo's Tumblr, a colorful and lively site that brings a cookie-infused Pinterest to mind. What user behaviors can you take advantage of?

How Esquire's Facebook fans got lucky. To build buzz for its new show "Lucky Bastards," Esquire Network let fans watch the debut episode right on its Facebook page—before anyone else! To keep engagement up, the episode was broken into three parts (1, 2, 3) and uploaded directly onto Facebook's video player, raising the question: Are viewers amenable to viewing Facebook as a place for TV-watching? 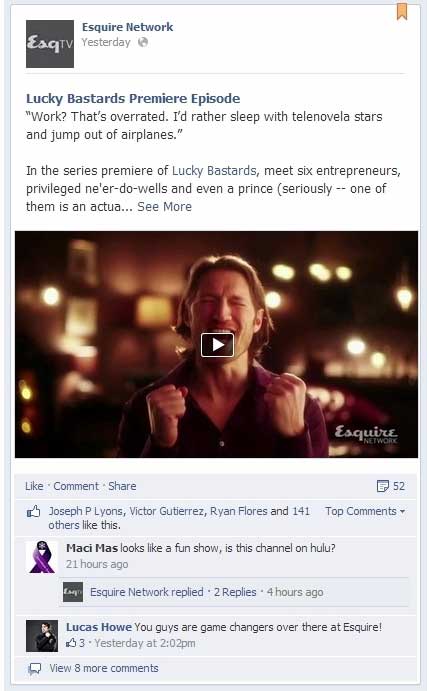 Starbucks: turning tweets into cash. Results are in for the StarbucksTweet a Coffee campaign, an awesome example of using Twitter for sales. On this simple site, users can connect their Starbucks and Twitter accounts. Then, by Tweeting to @tweetacoffee, they can offer a $5 Starbucks gift card to a friend. 27,000 people tweeted a coffee, some more than once—generating more than $180,000 in sales over the course of two months. That's a powerful use of Twitter and a holistic understanding of user behavior. Nice one, SBUX. 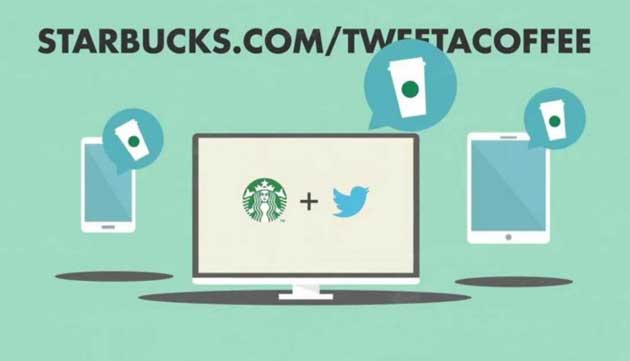 Like this if you hate Like bait. One of the easiest ways to build engagement on Facebook is to directly incite users to Like, Comment or Share (example: "Like if you loved last night's Mad Men, Share if you hated it!"). Facebook's putting a stop to the "Like-bait" game after discovering that Like-bait stories are 15% less relevant than other stories with a comparable number of Likes, Comments, and Shares. Pages that frequently publish Like bait will be penalized in the algorithm—meaning less visibility for them. Other new punishables include posting content that's already been circulated multiple times, and spammy links. Time to change your copy? 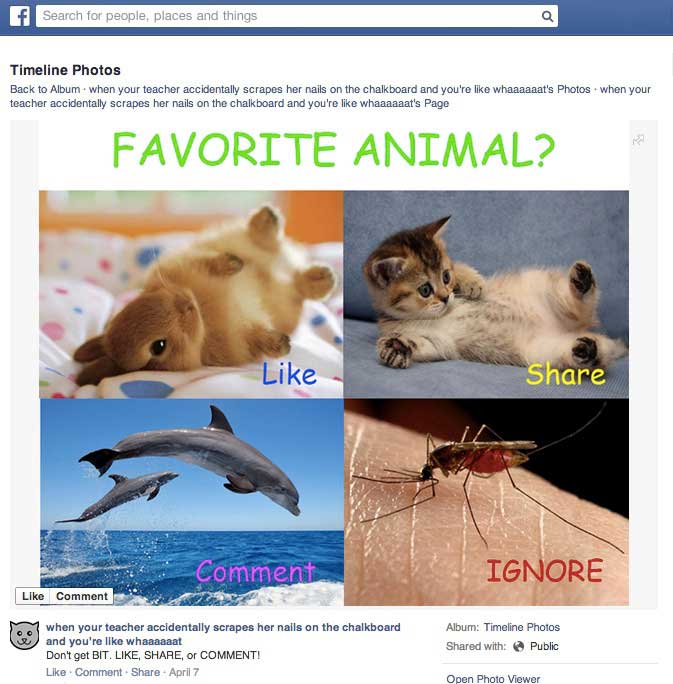 The Most Interesting Man in the World... now trackable. Remember Dos Equis' Most Interesting Man in the World? He's back... on Foursquare! Follow him as he checks into places like Mount Everest and leaves enigmatic, yet interesting, comments (like the below). Other little jewels pay homage to unlikely finds that'll somehow still make you feel well-traveled. The campaign builds on The Man's mystique, and the relationship is a first for Foursquare, which may invite more brands to bring their mascots to life (if only digitally): "We're always looking to collaborate with brands on unique and innovative campaigns, so you can expect more types of things like this in the future," a spokesperson told Digiday .

Why use Western Union when there's Facebook? Facebook's about to bring real value to users who can't seem to get off it. Its Ireland office is seeking approval for e-money status in Europe, which would permit it to issue digital credits that can be converted into cash. If the application is approved, Facebook could create a service whereby users can store money, buy things online... and transfer cash to friends and family. Good news for your e-store?

Advertiser revenue from Facebook shoots up 191% year over year. That's from Kenshoo's quarterly report on ad campaigns. Paid search still dominates ad budgets, but ad spend on Facebook is growing faster quarterly and annually. Per Kenshoo: "Social advertising has clearly emerged as a vital always-on component of the media mix and its triple-digital growth in revenue proves that marketers are successfully converting social engagement into tangible business outcomes." Check out the full infographic .

A little Gnip for your tweets? Twitter purchased Gnip, a social data provider and longtime partner that provides rare access to Twitter's complete data firehose (all tweets ever sent), and APIs from other social networks such as Bitly and Instagram. It serves clients in marketing, finance, and PR. The purchase gives Twitter more control over the monetization of its content—and a broader array of potential ad options to provide to clients (think more data). Apart from Topsy, acquired earlier this year by Apple, two companies remain on the market with access to Twitter's firehose: Datasift and NTT Data. We sense they won't be single for long. 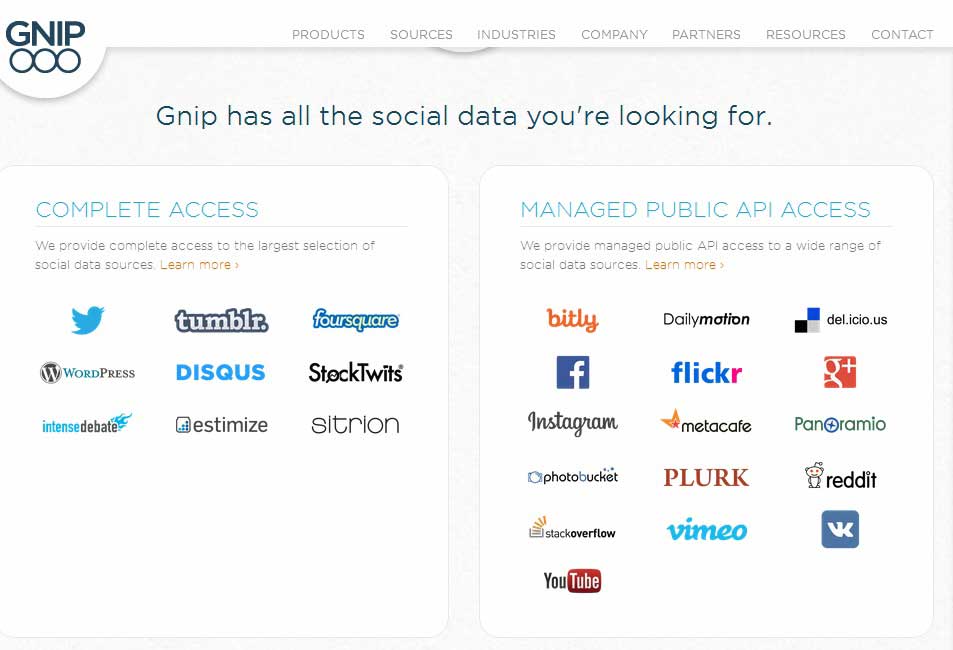 Give our hearts a break! Everyone's aflutter about Heartbleed, an encryption flaw that's affected numerous sites you probably use, exposing your account info—including passwords and credit card numbers—to serious vulnerability. Web security firm CloudFlare—which claimed it's nearly impossible to steal private server keys using the Heartbleed vulnerability—issued a challenge to the wider Web: Test their results by stealing their private server key (the key generates certificates that prove the server you're trying to access is legit.) Surprise! Within hours, two people responded and their hacking results were confirmed by CloudFlare. The first winner said it took just three hours to successfully steal the key. This is a powerful example of harnessing the crowd to optimize your products and test your assumptions... But, going back to Heartbleed, you should really change your passwords. Here's a list of affected sites.

Talk about awkward. This week in traumatic social buzz, @USAirways made headlines for what may possibly be the biggest social community management gaffe in the history of all gaffes. A Twitter user complained about her late departure (and consequent late arrival) on a flight; the airline apologized, but the user replied with sarcasm. The US Airways response was, umm... inappropriate—totally XXX-rated. (See the full story—and the option to view the tweet—here). The offensive tweet image—apparently the result of an errant snippet of copie/pasted text—was removed an hour later, but not before (not really) speechless Internet dwellers had time to unleash their inner copywriters.

Dear @USAirways, just blame it on Heartbleed. Everyone will believe you.

Of course, the airline apologized. Meanwhile, Digiday's published a treatise on whether it's worthwhile for brands to apologize so much on social media, since an apology often draws more attention to the sin. (Hey. We're all for apologizing. It's way worse to develop a reputation as that company that never admits flagrant wrongdoing. Also, it's just... nice. But it's your call.)

We apologize for an inappropriate image recently shared as a link in one of our responses. We've removed the tweet and are investigating.

Which late-night host has more social chops? The world's changed, and late night TV with it. The new nightly order includes Jimmy Fallon, Conan O'Brien, Jimmy Kimmel, and Stephen Colbert (who'll replace David Letterman)—all wry wits with sharp commentary and serious social chops, the better for attracting younger viewers. So who's the most viral? The winner's Kimmel, with 54 million views on his most-viewed YouTube vid (below). Fallon lags behind—if we can call it that—with 23 million views. If you're wondering how Kimmel does it, he's known for pranking stars, small children, and even us, then sharing the spoils on the 'Net. Personally, though, we'll always be on Team Coco.

They grow up so fast. We'll wrap with a video that had half the parents we know crying this week. Dutch photographer Frans Hofmeester has a daughter, Lotte, whom he's filmed weekly from birth to age 14. In this tiny montage, see her go from zero to adolescent in the blink of an eye—which is probably the best way to distill the way it happens in real life. At just over seven million views, the video serves as a vivid reminder of how universal some experiences are, and what it means when you bring that dose of humanity into your storytelling.