Find out how the FCC is giving big content providers a boost in online load speeds (and giving up on Net Neutrality?). Learn about Facebook's latest ad platform updates and LinkedIn's latest attempt to seduce brands into publishing... and see what viral video spread a zealous backlash to Dove's "True Beauty" campaign. Skim to stay sharp.

Happy 9th birthday, YouTube! New Media Rockstars fêtes YouTube's 9th year with the most memorable videos from each year it's existed. Our favorite is this "trailer" for "Shining" (below), which recasts "The Shining" as a lighthearted family film. 2014's most memorable video was April's Super Vine Compilation, reminding us how much online video's evolved (format-wise, anyway).

Watch for placebos. This month, Dove released "Patches," the latest in its Real Beauty campaign. In it, women are convinced to join a "scientific" study for a new product, a patch that promises to make you more beautiful, only to discover that the patch contains nothing. The video's been shared 20 million times:

To point out how condescending this tactic is, Above Average made a blunt parody: Women in an equally "scientific" study are left alone in a room with a mirror—behind which lurks a man in a gorilla suit that they're supposed to believe is them. It totally knocks the wind out of Dove's dramatic original, reminding us that when you've got a good thing going, the worst thing you can do is push your luck and set off users' BS radars. In this brave new world of unlimited content, that BS detector has only gotten stronger.

Cartoons go bald for cancer. In better-received news, a campaign for Brazilian children's cancer hospital GRAACC showcases beloved cartoon characters gone bald, in support of kids braving chemo. The effort hopes to ease the isolation they feel. It includes a website where visitors can pledge support.

A less neutral 'Net? The FCC said Wednesday that it would propose new rules that enable big companies—think Google, Disney, Netflix—to pay internet providers for faster Internet speeds. It's nice news if you like Disney content, but it also started a backlash from people who call this the end of Net Neutrality, which holds that online consumers should have equal, unhindered access to all (legal) content. Oops!

Say hello to your new Twitter page! As of Tuesday this week, Twitter's unrolled its revamped homepage to the joyous masses. It includes a larger profile photo (now 400x400 pixels) and a customizable header image (1500x500 pixels). It also includes Best Tweets (high-engagement tweets, which will appear larger), Pinned Tweets (enabling you to Pin a tweet to the top of your page for new followers to get a sense of who you are), and Filtered Tweets (letting you choose what kind of timeline to view when looking at other profiles). Ready for the new world order? Start here. 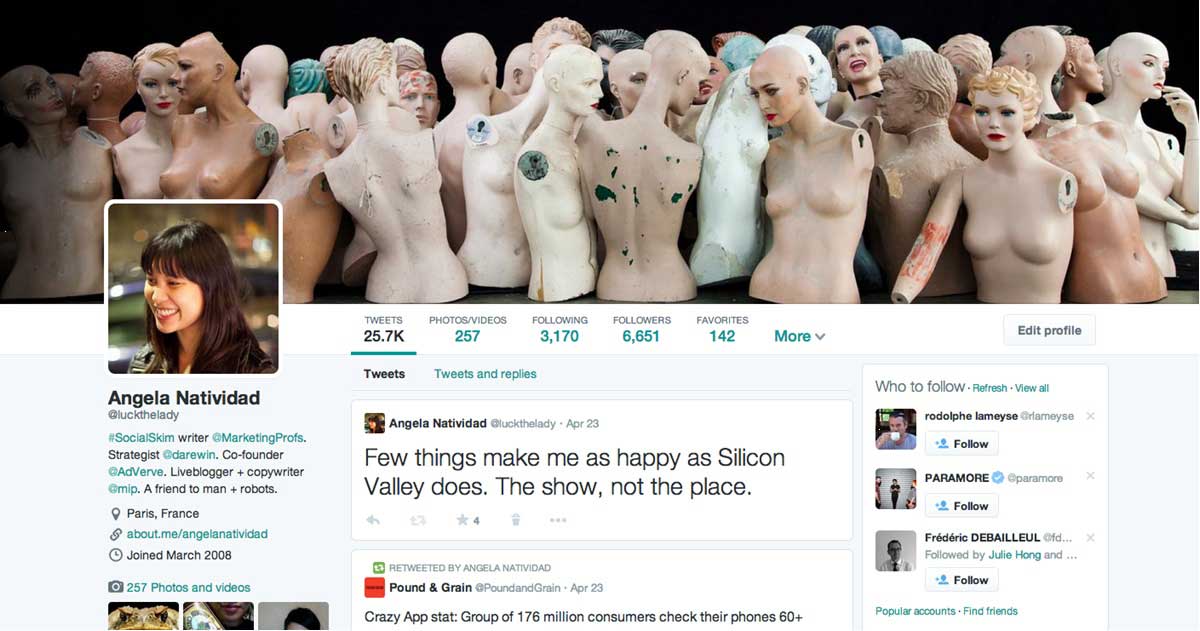 The NYPD's awkward Twitter fail. In an almost painfully hopeful attempt to get social savvy and improve its reputation among young people, the New York Police Department created a hashtag, #myNYPD, and encouraged people to tweet photos of themselves with an NYPD member. You're probably cringing at what a not-good idea that was... and indeed, #myNYPD got mobbed with police brutality photos. A reminder that social media isn't a reputational bandaid; it's an open door to how people feel about you. Use it wisely, and with a plan for addressing those very real emotions. 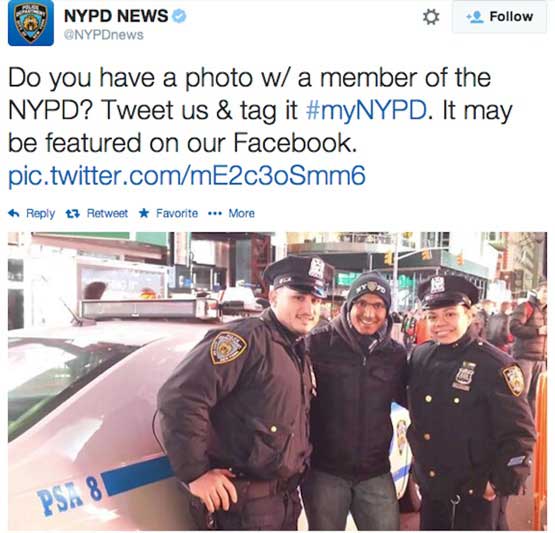 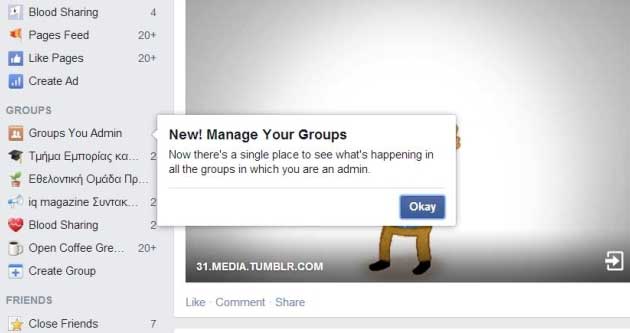 Taking a bite of the fitness market. Facebook's purchased motion tracking app Moves, which will join Facebook to "work on building and improving their products and services." Available for Android and iPhone, the app lets you track your daily activity, giving Facebook a foot in on the growing fitness tracking market. 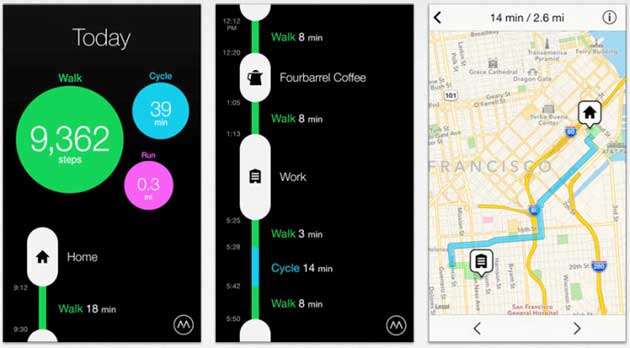 Bye-bye, organic reach. More sad news from the Diminishing Facebook Organic Reach Department: an anonymous source told Valleywag that it'll be plummeting to as low as 1% very soon. Per Vocus Blog, "Not only do marketers need to understand how to deal with Facebook's Page squeeze (strangle?), but also to understand how much of the online punditry is helpful." CNET has confirmed organic reach's slow decline. Time to pony up on ad spend. 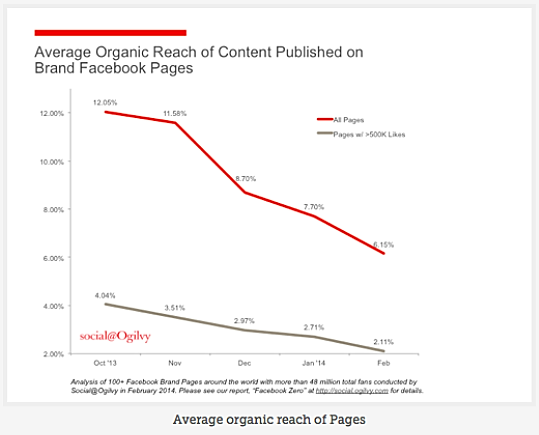 Bringing Pinterest use to life. There's more to pinning than recipes! Digiday's gathered five campaigns that use Pinterest in ways that connect to the real world, including Kate Spade's city guides initiative (shown below) and REI's "Backyard Adventures." What have your pins done for users lately? 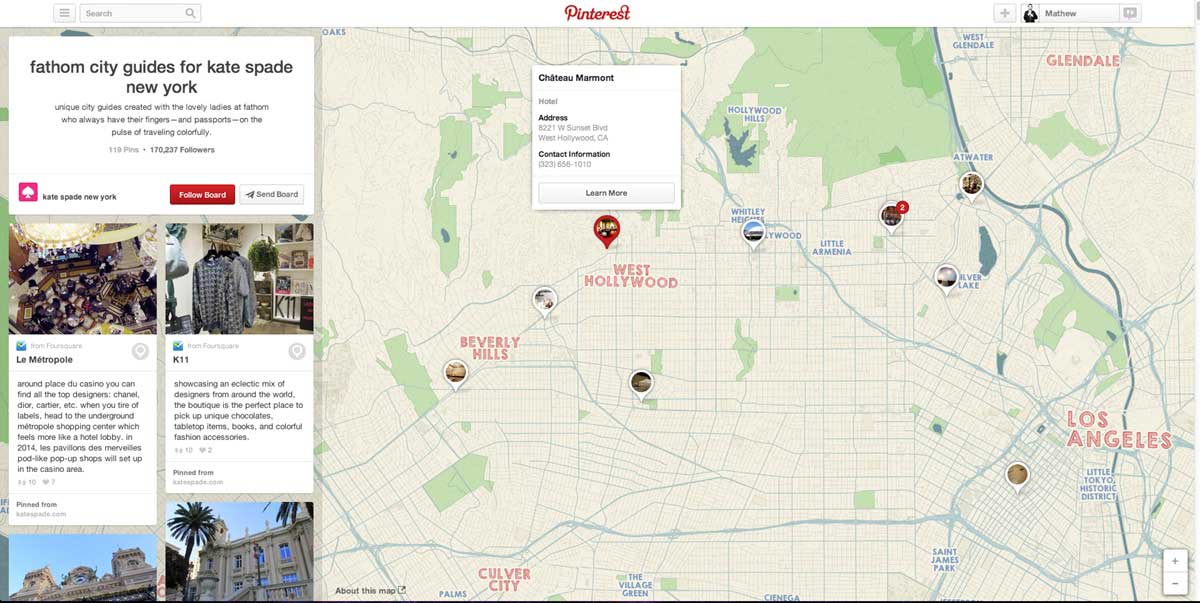 More proof that images rule social. Business2Community's published a QA with Ashley Verrill of Software Advice, which recently provided insight on the importance of images in social marketing. Verrill says people hate reading on social media, so images are easier for the skimming-crowd. She also expresses optimism that marketers will get more savvy with video apps such as Vine and Instagram. But before you go on a photo frenzy, remember the goal: Focus on building a following that's loyal and engaged. So photos should be of good quality, consistent with your message, adapted to the platforms you're using, and easy to share. 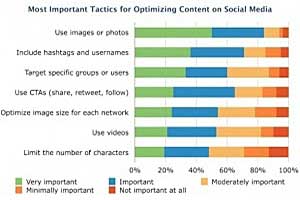 G+: more slice of the pie than we thought! Customer profile management provider Janrain provided some details for social login trends in Q1 of 2014, finding that while Facebook's share of social logins was 42%, Google Plus wasn't far behind, with 38%—and that it slightly beat Facebook and LinkedIn for social logins on B2B sites. Those findings differ from Gigya's claim that Facebook was increasing share while Google Plus remained flat. The explanation for G+'s surprising rise is simple: Consumers must now use a single Google login to access multiple services, including Gmail, YouTube, Google Drive, and Android; and as these services grow more embedded into their lives, their login tendencies follow suit. Whether you trust the data or not, we do know that regular Google Plus updates produce positive social SEO. Here's how to take advantage of that. 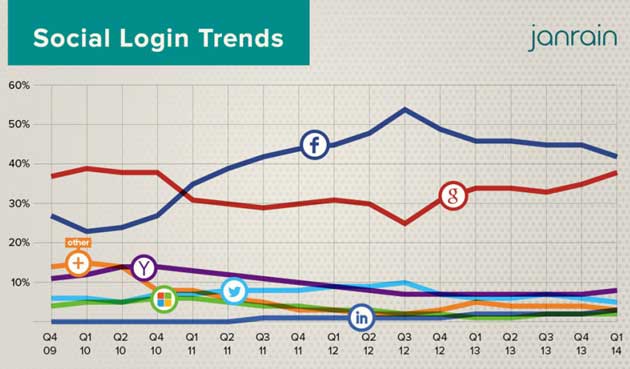 Become a publisher... on LinkedIn. LinkedIn is encouraging companies to create "brand journalism" initiatives, hoping they'll then pay the professional social network to promote and target their stories. To check out what they have to offer, read up on its publisher program... conveniently written by a LinkedIn publisher.

Let's wrap with something inspiring. "Still Life," a short film by Charles Frank and Jake Oleson, celebrates the connection between ordinary everyday moments—so often missed—and creativity. Having trouble ideating? Just look around; a universal, relatable moment may be right under your nose.