It's a good day for data. Find out why fandom's so important, how LinkedIn users consume content, and how Facebook plans to improve video ad click-throughs for advertisers. Skim to tip the charts.

The bite felt around the world. In a trademark move, Uruguay soccer player Luis Suarez bit into Italy player Giorgio Chiellini's shoulder during a World Cup match... and a bunch of brands jumped onto the buzz that followed. Notably, Bud Light and Listerine bought Promoted Tweets around the #Suarez hashtag; other biters-on included Trident, Cinnamon Toast Crunch, McDonald's, Snickers, and even Major League Baseball! Pro-tip: When something unexpected happens and you want to ride the wave, check the temperature of the conversation first. If it's mostly comedic and in good fun, as was the case here, feel free to join in.

We all just wanna be loved. Peter Herrnreiter cracks the code on the psychology of belonging, explaining that fandom is part of a deeper desire to belong, and—more important—to make a difference in the community in question. You've seen it in the World Cup, and you've seen it among Apple fanatics. Put this into action by producing a powerful "why?" statement. Why are you in this business? Author Simon Sinek can help you zero in:

How LinkedIn users consume content. A LinkedIn survey's found that (surprise!) 62% use the service to build colleague/client relationships, while 55% seek to enhance their professional reputations. When people come to LinkedIn for content, they typically seek either industry news or new ideas. The most popular content types for this pursuit include new research (which 72% share), breaking industry news (shared by 61%), and case studies (shared by 52%). Most people share by using the "Like" button. 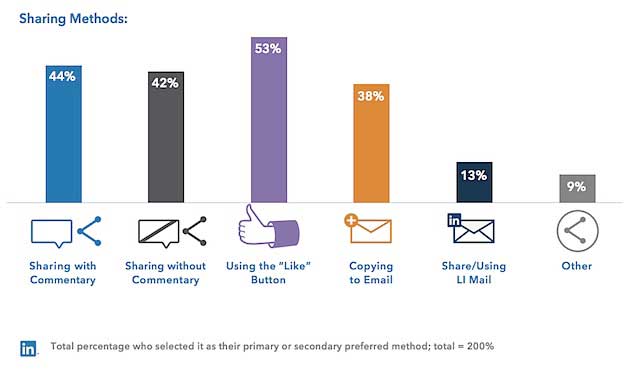 Extra, extra! Americans say social media doesn't affect their purchases. That's per a Gallup poll that found 62% of Americans say Facebook and Twitter, among other sites, don't affect their buying decisions. Traditionalists and Baby Boomers claim they're the least influenced (75% and 68%, respectively, "not influenced at all"), but Millennials don't fall far from the tree (48%). Most people say social media is for connecting with friends and family (94%)—which isn't to say social is a bad bet for brands, but it is a reminder to be mindful of how you're contributing to the conversations taking place. People aren't there for you, so make your moves worth it. 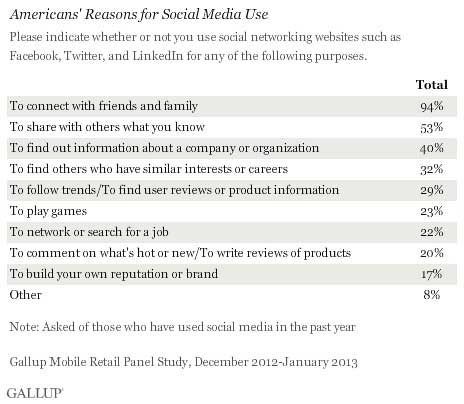 How often do you hit Play? Facebook's optimized its video ranking system to gauge whether people are actually watching the videos that appear on their News Feed, and for how long. People who watch videos more often will start seeing more, whereas those less likely to watch videos will gradually see less and less. This will give the 'Book a clear picture of who'll be more likely to respond to video ads—a plus for advertisers and their click-through rates. (Users clearly win, too.)

Teens are still on Facebook. This just in: 80% of teens are still using the world's most popular socnet, and they remain more active on it than any other, says Forrester's research on 12-17-year-olds. Surprisingly, it also found that Google+ is more popular among teens than Pinterest and has a similar adoption rate to Twitter. The myths about Snapchat, however, haven't been exaggerated: About 40% are on it, versus 30% adoption for Tumblr, Vine, and Pinterest, each. YouTube is up there with Facebook, at 80% adoption—but Facebook and Instagram top charts for "hyper-use."

Is that a bigger ad, or are you just happy to see me? Facebook's begun its rollout of larger right-hand column ads, hoping to offer "a more engaging creative canvas" to advertisers while minimizing the number of ads users actually see. Careful, though! To score a big ad, your specs will have to meet their demands. Ineligible ads will appear in a small format. (In September, though, this option will simply disappear.) Also, don't forget the 20% text rule: An image with over 20% text will automatically be refused for advertising.

Using Audience Insights: a handy how-to. Francisco Rosales put together a guide to using Facebook's Audience Insights, with myriad tips and examples for targeting the right people (crucial for making your media buy count). Learn how to identify your existing audience, group together the people you want, and even filter based on obscure things like "home market value." (Because doesn't everyone want the Chelsea girls?) 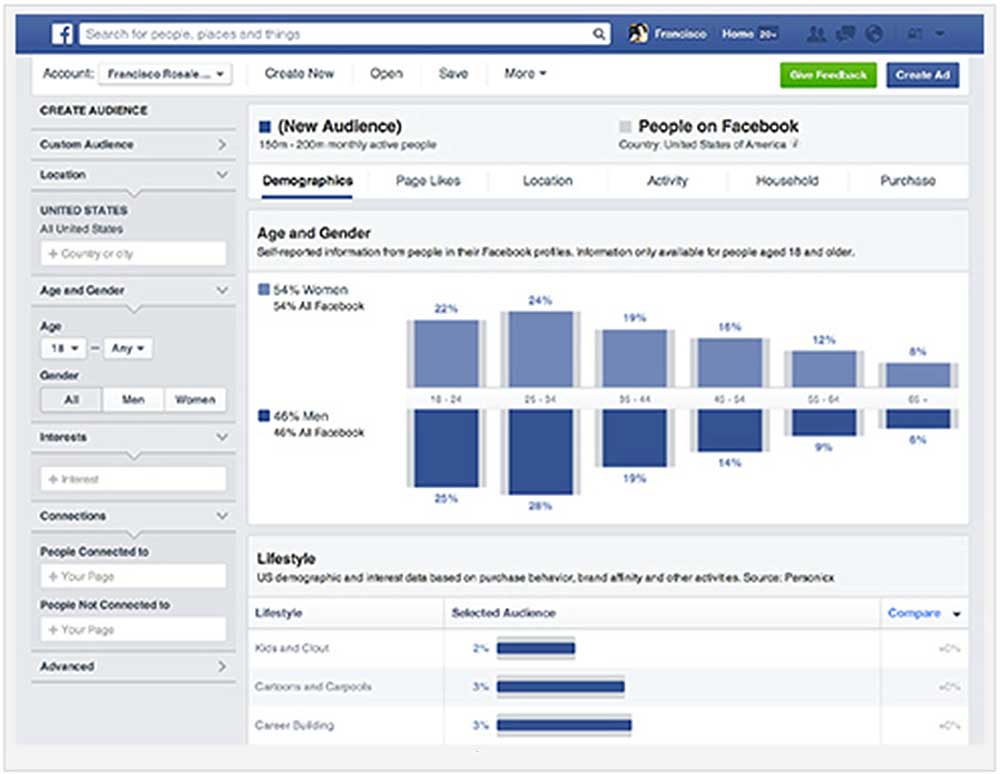 More ways to get seen: Buffer App provides five data-driven ways to ensure your Facebook posts don't slip into the ether. Among them: schedule for engagement based on the most popular times in the workweek, embrace your emotions (like the exclamation point!), and do get visual. Images score 37% more interactions than posts without them. 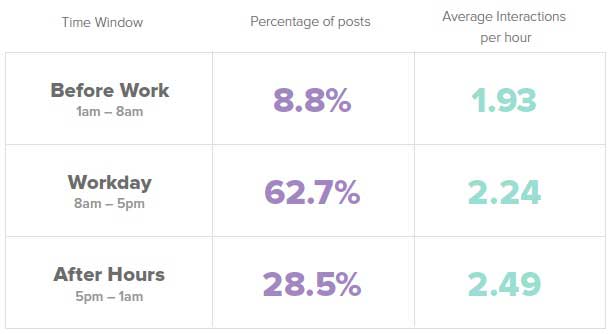 When numbers tell a story. Klout provides insight on how you can use data to tell a story that's both compelling and shareable online. Advice includes using comparisons (it provides context), and finding a hook in your data that captures the imagination. A classic example is the below tweet by Walt Mossberg:

Majority of engineers believe they will become millionaires, study says https://t.co/qDbbWj6j3k via @NellieBowles

We'll wrap with something inspiration-rich. At Cannes Lions, Saatchi's New Directors Showcase is among the most anticipated sessions, and FastCoCreate's gathered all 18 films featured this year. Wallow in the emotional punch that great direction—and production—can pack. Case in point: "Moving On," a music video for the band James, where two balls of yarn take you on an unexpected journey of love and loss.