Still peeved about Facebook manipulating your feelings? A clever Mood Manipulator plugin lets you decide how your News Feed feels. We've also got Snapchat news, Reddit Live, an Instagram case study, and tips on feeding your blog all the content "food groups." Skim for a balanced diet.

Take criticism on the chin. Today in #socialfails, Southwest Airlines flight 2347 from Denver kicked an entire family off a plane because, prior to boarding, the father tweeted something like, "Wow, rudest agent in Denver. Kimberly S, gate C39, not happy @SWA." We don't have the original tweet, but that's only because the family was immediately ordered off the plane and told to delete the tweet if they wanted to get back on.

Southwest apologized via email and sent the entire family $50 vouchers. (The family has nonetheless decided never to fly Southwest again.) Lesson 1: Don't kick people off your service because of a customer service critique that lacks menace or bad intent. Lesson 2: When your employees put you in a situation as awkward as this one, ensure compensation is somewhat equal to the level of injury... $50 is the airline equivalent of a bad tip.

The latest on Facebook's earnings... and usage stats. The numbers are in from Facebook's earnings call, and they're as scary-good as you expected. The world's favorite social network hosts 1.32 billion users per month, of 30% whom access the site exclusively from their phones. The 'Book will account for 9.5% of the US digital ad market this year, and 62% of ad revenue comes from mobile.

Mark Zuckerberg couldn't resist mentioning that Americans spend an average of 40 minutes a day on Facebook, up from 17.39 minutes last year. He also said that users spend a whoppin' nine hours a day engaging with digital media, including computers, mobile, and TV. Long live the kings. (Speaking of, Facebook drove 23.4% of social referrals to other sites in Q2, per Shareaholic. Pinterest was the second-strongest social sender of traffic... with 5.7%.)

Say hello to Facebook Save! This new, much-needed Facebook feature lets you bookmark things you like for consumption later on, including links, places, movies, TV shows, and music. You can access saved items via desktop or mobile, and share saved items with friends. This feature ensures that users stay on Facebook longer, keeping them from skipping off to where they'd typically bookmark good finds, like Pinterest or Pocket. Expect to find Save in your News Feed in the coming days.

Still miffed about Facebook's manipulating your feelings? We give you the Mood Manipulator, a browser extension that, based on Facebook's own research on users, lets you choose how you want to feel and filters your feed accordingly. This is what the internet was born to do. 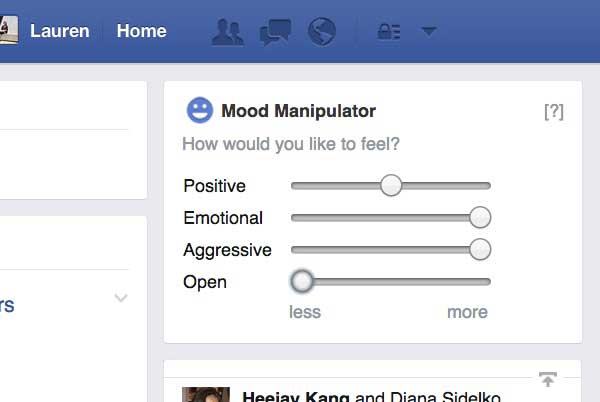 Shape up socially! Hillary says so. Hillary Clinton paid a visit to Twitter headquarters to vaunt the importance of social media for people, organizations, and nations. "However, if it is used primarily to score points, to engage in the kind of back and forth that is marked by trade insults and...sometimes misinformation, it's not fulfilling its best use of trying to connect people and overcome differences and try to resolve problems," Clinton said, adding that she hopes social matures to where "people actually listen to each other." She encourages organizations to think of it as a tool of outreach, negotiation, and resolution.

Your guide to a well-balanced blog. LinkedIn's latest infographic provides content ideas for the blogging "food" groups. Whole wheat and grains, for example, are the equivalent of how-to posts, repurposed content, and third-party posts. Plus, don't forget "easily digestible" snackies: videos, graphics, and stories. A "meal plan" provides tips on when to dish out each food group. Dig in! 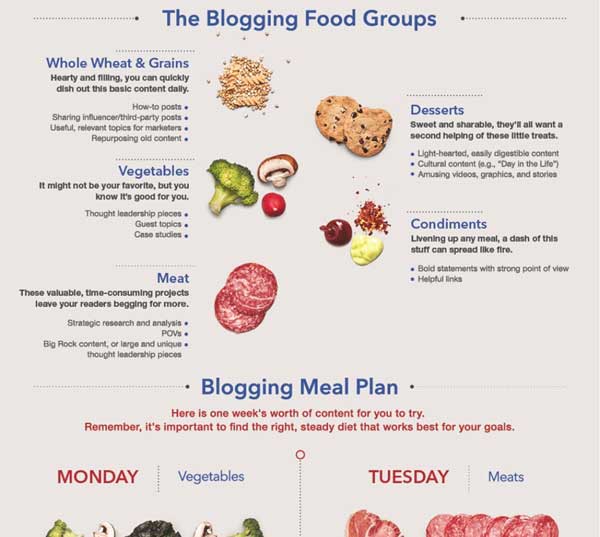 Reddit Live goes live. Is your event Reddit-worthy? Start a Live page! Reddit's publicly unrolling Live, which lets people create threads that can be updated and followed in real-time. Users can add pictures and videos by pasting a link, making it super-easy to share a collective experience. (Think livetweets, except you don't have to refresh the page over and over, and your Live page is totally dedicated to your event.) Topics that went Live during the beta included [Twitch Plays Pokemon and the NBA Summer League (shown below). 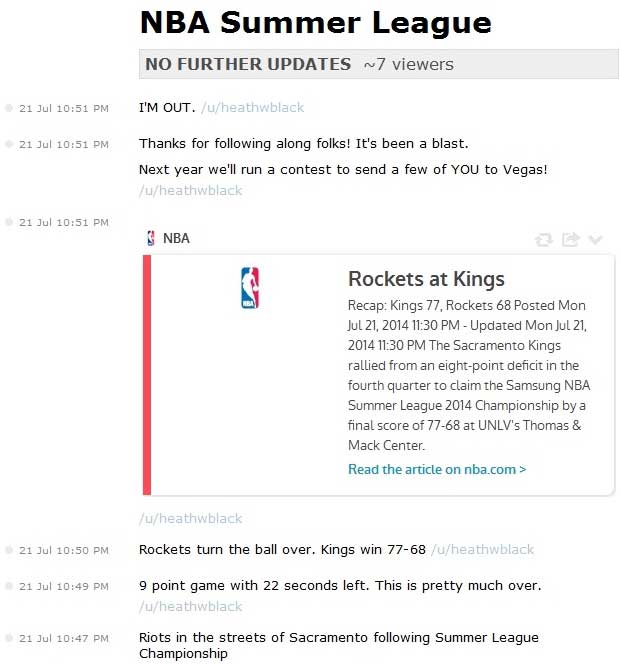 Snapchat to boost your sales. Here are three case studies that demonstrate how Fro-Yo, Taco Bell, and HBO's "Girls" use Snapchat to pad their bottom lines. What makes Snapchat so attractive is its ability to work in the ephemeral, meaning time-relevance is everything. (You could say that about Twitter, but a self-destructing message feels so much more special!) The "Girls" team uses it for sharing photos, episode reminders, and cast shots from the red carpet; it's even decked Snapchat's ghost logo out in protagonist Lena's own yellow mesh tanktop. Three cheers for symbiosis? 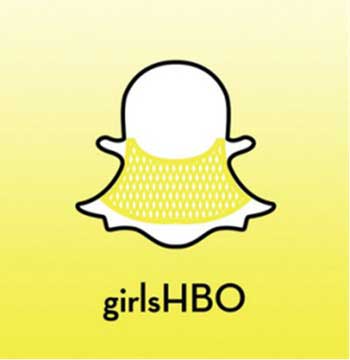 Snapchat recently filed a trademark related to handling payments, which will make it even juicier for marketers who want in. Business Insider has a downloadable report packed with current Snapchat user stats.

Reasons why I enjoy being friends with Taco Bell on snapchat pic.twitter.com/2jFY3A7jGb

How Nasty Gal approaches Instagram. Danielle Geva's broken down retail site NastyGal.com's Instagram strategy. (Nasty Gal is a $100 million business launched by 29-year-old Sophia Amoruso.) Geva describes how it approaches branding, content, and engagement with a personal touch and a good set of ears: It doesn't just interact with fans, it listens to what they're looking for. Pro-tip: Instagram is historically anti click-through, but Nasty Gal cleverly puts shortlinks in image descriptions and uses them as "locations." 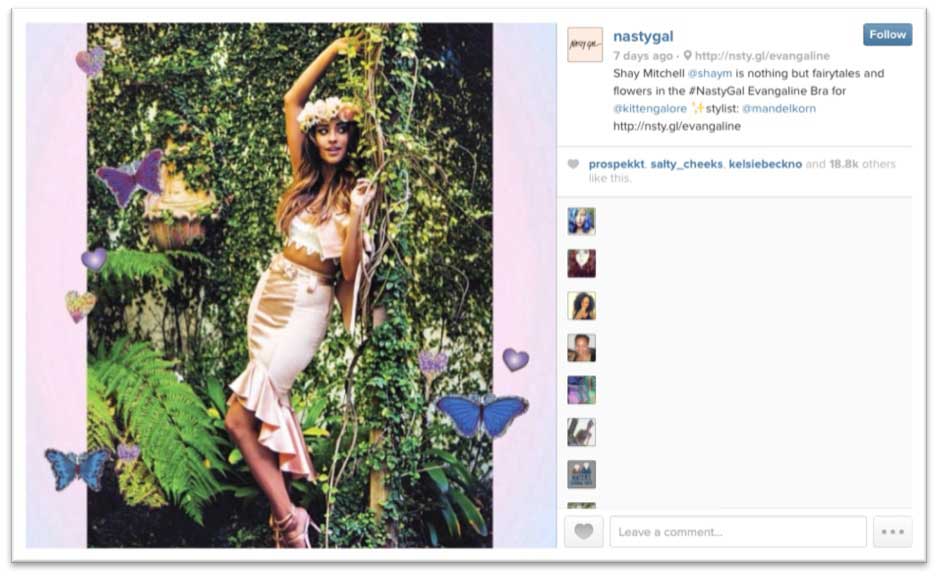 Say hello to the digital bride. Mashable and TheKnot.com partnered up to find out how social media is changing matrimony, and the results are fascinating: 55% of couples use a wedding hashtag for the big day, 28% of brides to be update their social status within hours of being proposed to, and 89% use wedding apps! Get the full skinny. 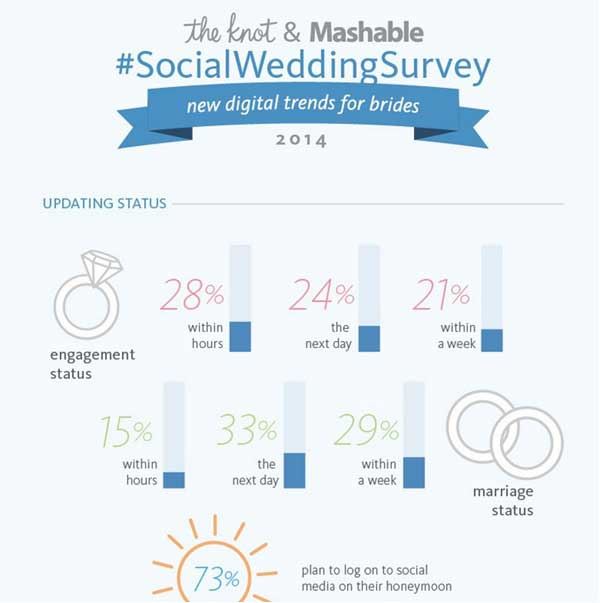 How to get on journalists' radar. Need some earned-media love? Experts from agency Fractl surveyed 500 editors at sites like BuzzFeed, Lifehacker, TIME, and TechCrunch to find out how to attract their attention. In particular, don't send them fully written articles. You think you're helping them, but 70% prefer to collaborate on content. Also, 69% prefer morning pitches. More in the presentation; the rest is up to you.

We'll wrap with something brand-packed. Artist Pierre Buttin's made a supercut of every instance where a brand is mentioned in cult show Sex and the City. The most-uttered brand is Vogue (36 times), followed by Martini (34 times). And if today you own a pair of Manolo Blahniks, more than likely it's because one of the girls (probably Carrie) name-dropped it 16 times. In total, the show's six seasons mentioned 324 brands—838 times! (What does that say about how brands permeate our lives?) Off-topic: If somebody wants to hire us to rewatch every season of Buffy to count stake puns, we are always ready.