This week was packed with tricks for "hacking" social. We give you the definitive guide to Snapchat hacks, a Twitter feature that'll encourage followers to retweet for goodies, self-destructing photo posts on other social networks... and the social stars who are more important than celebrities. Skim for the inside story!

Lemme take a selfie. No. 1 on the Viral Charts this week is "#SELFIE," a mad (and maddening) romp of youth culture—and the selfies they inspire. A few choice celeb selfies also make the cut. As proof that anti-selfie culture pays as much as selfies do, the video, created by The Chainsmokers, has clocked nearly 194 million views.

Extra, extra: Apple's going social! Apple's snapped up Musa Tariq, ex-social media chief for Nike and Burberry, to head its social efforts. Musa, who boosted Nike athlete relationships on social and led Burberry's social media work in China and for the London Fashion Show, will be joining as digital marketing director. Watch your feeds for his debut, and here's an example of "Acoustic," a Burberry campaign he did where musicians sing acoustic versions of pop songs.

A Pin's so much nicer with a message. Pinterest now permits users to send instant messages to each other, producing a nice social dimension that encourages conversation around image-sharing. Users must be following each other to be able to chat, and you can start messages by sharing a Pin with someone.

Don't worry, get scrappy. Our own Ann Handley wrote a video content marketing mini-guide of sorts, dismissing common myths ("Brand videos should be slickly produced") and providing practical, attainable truths ("Scrappy trumps slick"). Here's a crazy idea: What if we just stopped trying so hard, and told our stories simply and honestly? Here's a video that didn't take piles of cash to make, but directly addresses a common customer problem:

Flock to Unlock. Twitter worked with Puma to create a special Twitter Card called "Flock to Unlock," which enables users to unlock new content if they've retweeted you enough times. The feature appears for Puma's "Forever Faster" campaign, and although the number of tweets needed wasn't shown... fans saw a graph that told them how close they were to the goal. Below, the tweet featuring the unlocked TV spot:

Going to be the first to see the new @PUMA TV spot. #ForeverFaster https://t.co/DaqfIE4GLQ

For a primer on using Twitter Cards, read Ignite Social Media's breakdown on activating them and the default options. Recently, an agency I work with used Twitter Cards to produce Red Bull Air Race tweets that used special characters to break through other tweets and let people go straight to a ticket-purchasing page when they clicked on the tweet itself. 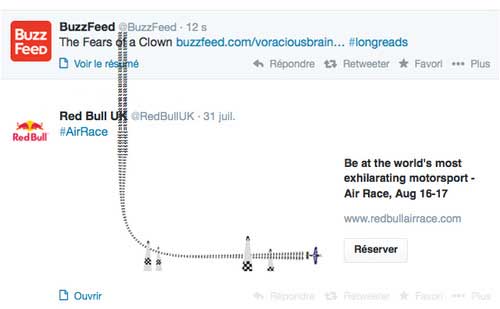 For more on maximizing Twitter, check out this primer on using Twitter Analytics to find important data.

Can I use that pic? Curtis Newbold, The Visual Communication Guy, thoughtfully created a chart that explains when you can, and can't, use a picture online. It also provides a short list of "fair use" questions to ask yourself when you aren't sure. Note that the longest section involves use of images found on social media. Read with care!

Prep for your social media audit. Social Media Today furnishes you with 10 questions to add when assessing your social strengths and weaknesses. A key one: "Have you aligned your goals on social media with the goals of your brand in general?" Don't just start a Facebook page because everyone's got one!

Speaking of, Facebook slowly seems to be enabling people to access its Insights feature for events. This means that when you launch a Facebook event, you'll now be able to see reach, views, and new connections. Huzzah for granular data! 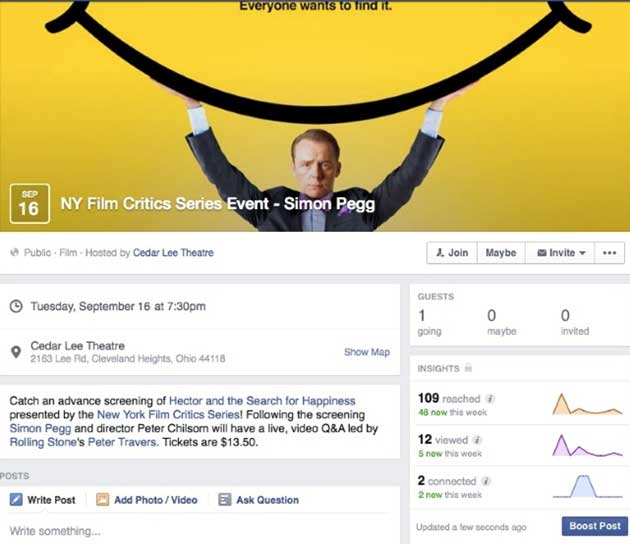 Who's hotter than Jennifer Lawrence? Quite possibly Smosh, an online comedy duo, if you're asking 13-18-year-olds, according to a Variety survey. For them, the five most influential figures all hail from YouTube. Others include The Fine Bros. and Swedish gamer PewDiePie. The highest-ranking non-YouTuber is Paul Walker, best known for the Fast and the Furious film series, who died last year. 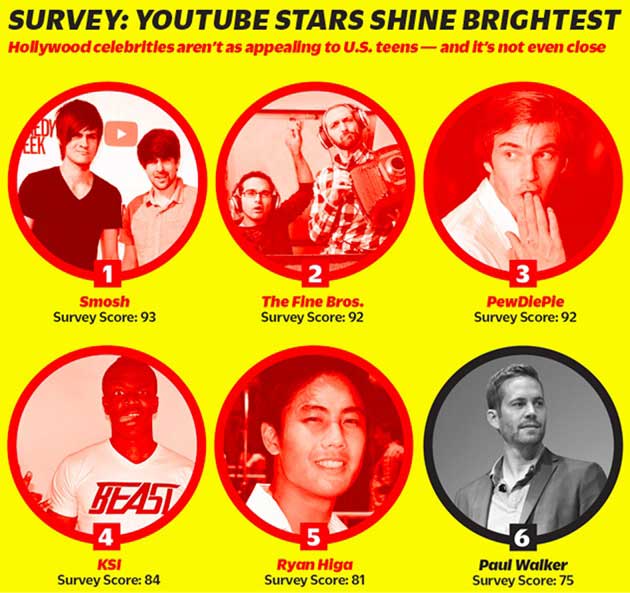 In line with this trend, veteran YouTuber iJustine collabo'd with Fast Company to produce a video about going big on YouTube. Can YouTube make you rich? Guess it depends on who you ask. Asked whether she could fund a separate business, iJustine laughed awkwardly and said, "Maybe a very small company that doesn't want a lot of money."

The definitive guide to Snapchat hacks. It turns out that a lot of great Snapchat features are hidden! The Daily Dot provides a breakdown of hidden features that Snapchat pros use. Some "hacks" involve downloading other apps, like Snapkeep, which lets you save snaps forever. For drawing super-fine lines, most Snapchat pros use iPad, because it lets you draw more precisely on a bigger screen, although the final Snap stays the same small phone-friendly size—making fingerwork look way cleaner. Snapchat also has a secret color gradient feature. 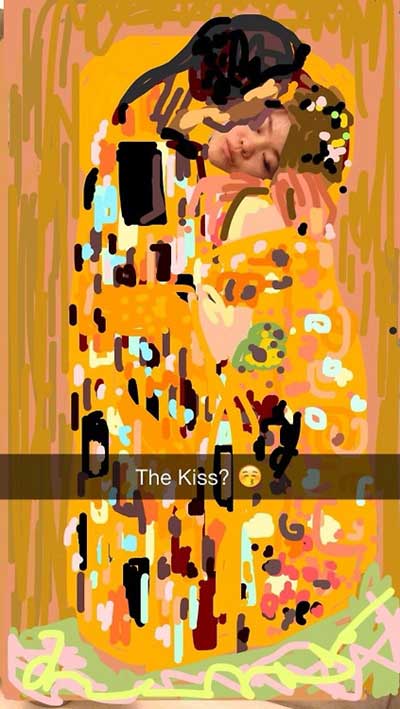 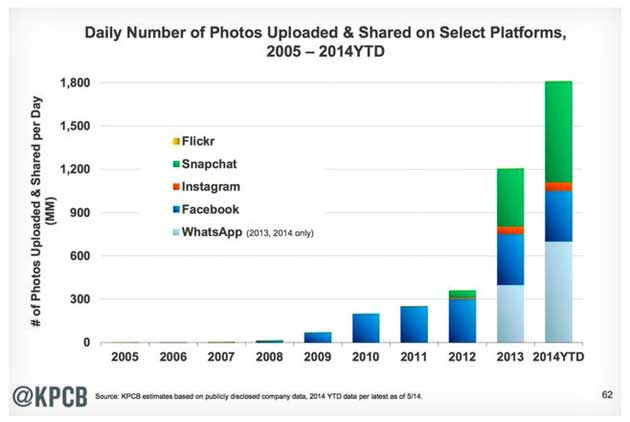 Instagram kicks up its ad game. The site's ripped a few pages out of Twitter's playbook, with features like suggested follows, curated content, and trending hashtags. Get ready to up your photo game; AdWeek says that Instagram's fast catching up to Facebook—and is achieving three times more engagement per post.

How to make self-destructing photos for... Facebook? A cool app called Phantom lets you produce images that disappear à la Snapchat, but that can be shared across other social networks, forums, or blogs. Using Phantom, you decide not only how long you want the image to be available but also how many people should see it. The downside: for it to work, viewers must have Phantom installed on their smartphones, and they must be viewing the photo from their phones, too. Le sigh. 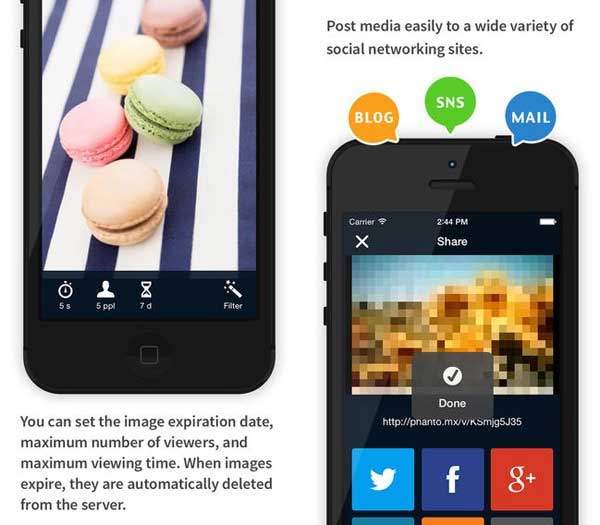 Here's what gets shared. CoSchedule analyzed nearly 1 million headlines to see which get shared most across social networks. Some 89% of content gets shared fewer than 100 times. He lists words and phrases that get shared most often (list posts are HUGE, as are posts with "you" and "your"), and describes how common headline words differ, depending on the social network you use. Facebook and Google+? Big on home-oriented words like "recipe" and "homemade." Twitter is more business and tech-focused. 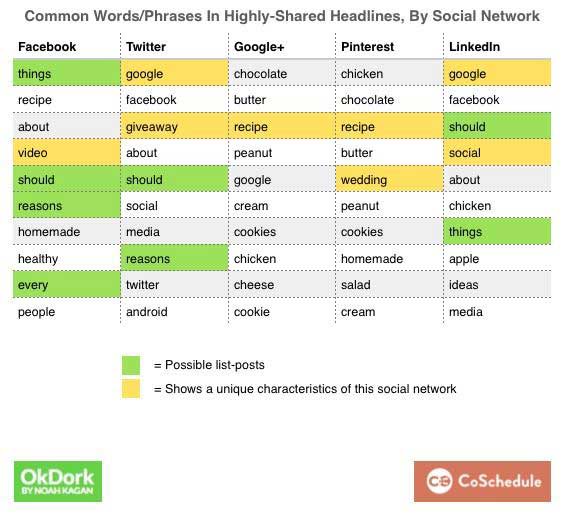 Tumblr: Come to make ads, stay to build relationships. Tumblr's positioning itself as an aggressive player against other social networks, implying, for example, that Facebook is more about ad sales than cultivating relationships via creative content. Global head of brand partnerships Lee Brown says brands can use Tumblr to host substantive and lasting creative versus one-campaign wonders: "It allows for earned engagement long after the content has expired on other platforms," he says, versus Twitter, for example, where content is ephemeral.

When native advertising needs a spanking. Days before slightly alarming news that the New York Times plans to reduce its native advertising labels to keep marketers investing , John Oliver did a hilarious—and scathing—sendup of native advertising on Last Week Tonight. Just a reminder that we always need users to recognize what we're doing, even though we'd like them to see us as much for our entertainment value as for what we're selling.

We'll wrap with some tasty readable swag. This week a new graphic novel, The Spirit of Bacardi, was released as a free digital download. Creators Warren Ellis and artist Mike Allred wrote and illustrated it alongside the brand to share the story of the man and the family behind the famous rum. Read their interview here. This is a nice example of native advertising that's obvious, but not necessarily off-putting, to fans and potential clients. Here's to native advertising that pays you. 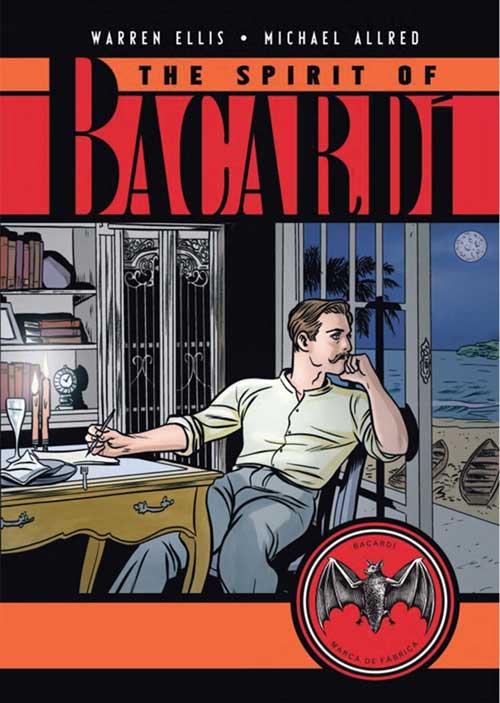