School's back in session, but social hasn't stopped. Score a cheat-sheet on Facebook demographics, consider what strategies other marketers are using for social media, ponder what makes a LinkedIn post popular, learn about Facebook's testing of self-destructing messages, and see the latest New York Fashion Week social stats. Skim to stay on top.

Share your guilty pleasures in secret. Netflix sealed a deal with Facebook that enables its users to share an episode they like with friends via private message on Facebook—a response to users' desire to engage in more private ways than broadcasting everything they're doing to everyone they've ever met. The move also reinforces Facebook's desire to evolve into an everyday personal-use tool, more like one-stop rendezvous point for quick public and private interactions than like a mere public profile page.

When fashion flocked to social. Designers didn't just strut the runway during New York Fashion Week (#NYFW), they invaded Pinterest, Instagram, and Twitter, filling feeds with photos, videos, and Vines of tomorrow's fashion. Twitter reported over 1.2 million Tweets with the #NYFW or related hashtags, and a Twitter Reverb chart illustrates how conversation spread, hitting 376 tweets per minute on September 9. Below, a Vine from Vogue features an extra creative boost from Hyperlapse:

Speaking of fashion, turnkey e-commerce platform Shopify, which developed a closer relationship with Pinterest this year, published a helpful post that makes it easy for its merchants to integrate Rich Pins. Rich Pins make it easier to push products, movies, recipes, articles, or places right inside the social network. You can also learn how to add Pinterest buttons to Shopify product pages—simplifying your product's route to virality. For more on using Pinterest for marketing, read this Business2Community article on how to prep a proper Pinterest-ready strategy. And here's an example of using Rich Pins for products: 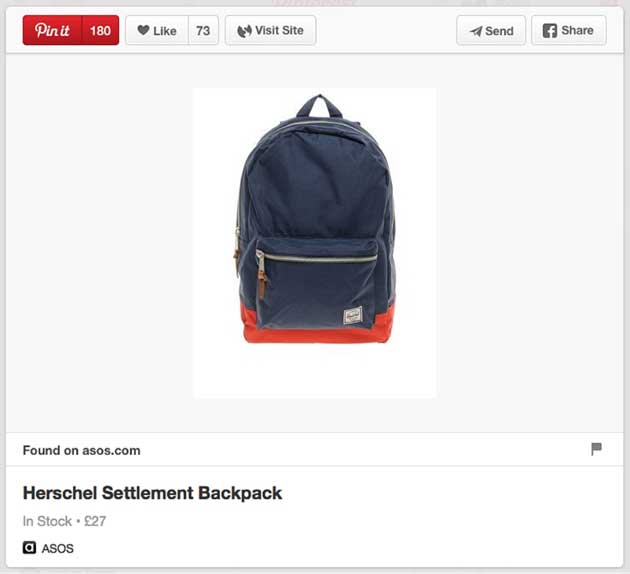 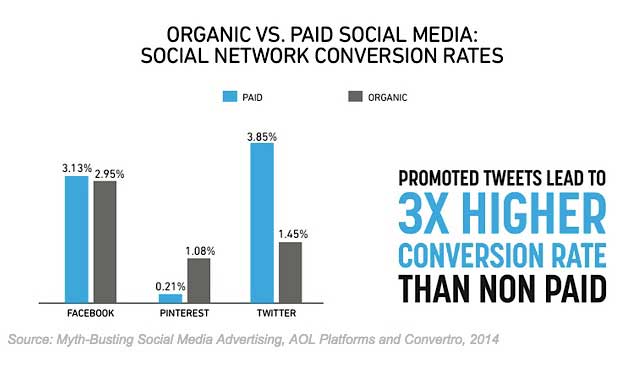 Tearing a page out of Twitter's playbook. Facebook's announced plans to change its News Feed algo to present more conversations in real-time. Your feed in the coming days will also feature "trending topics" more prominently, as Facebook's discovered such topics yield a 6% increase in engagement. The hope is that these efforts take a bite out of Twitter's real-time traffic; since Twitter doesn't sift your tweets algorithmically, it's easier to stay on top of events as they happen. (Incidentally, Twitter's mulling over a curated algorithm that's more like Facebook's. This is getting awkward.)

What's the key to kingly LinkedIn posts? Paul Shapiro analyzed the 3000 most successful LinkedIn Publishing posts to give you tips for professional publishing success. A few: keep titles between 40-49 characters long, ensuring more post views; keep posts visual (eight images is a sweet spot for more shares); and don't add videos or multimedia, which can lower your views. Also, ensure that an image leads at the top of your post, like this: 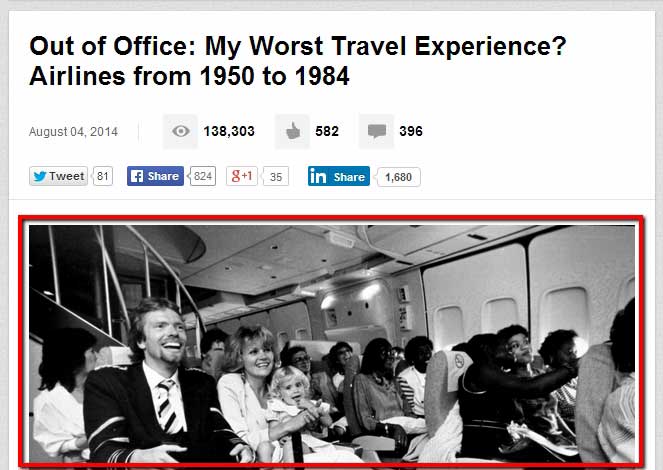 This Facebook post will now self-destruct. To attract users seduced by ephemeral messaging on Snapchat, Facebook is testing a feature on its mobile app that lets people create such posts, then decide how long they want them seen—between one hour and seven days. If the effort succeeds, it could present an interesting new opportunity for marketers who want to take advantage of ephemeral messaging (say, for discounts or specials) but prefer using a social network they already know well. Let the games begin!

Ready to roll for iOS 8? Facebook's updated its mobile app to better jibe with Apple's new operating system, iOS 8. An updated feature lets people share content just by tapping the share icon and selecting Facebook. They can also target their ideal audience, add locations, specify what they're doing, and tag friends. Visuals will also get a boost as Facebook Mobile optimizes for the larger screen sizes of the iPhone 6 and iPhone 6 Plus. And to prevent early freakouts, Facebook would like you to know that despite Apple's location data updates, you still control how much location data Facebook gets.

Schedule Facebook posts from Hootsuite. On your phone! Hootsuite's also jumped on the launch of iOS 8 with the brand-new Hootsuite Share Extension. It lets publishers schedule and publish content—from their phones—to social networks supported by Hootsuite, including Facebook and Twitter, and to multiple profiles at once. Links are automatically shortened. Isn't the future beautiful? 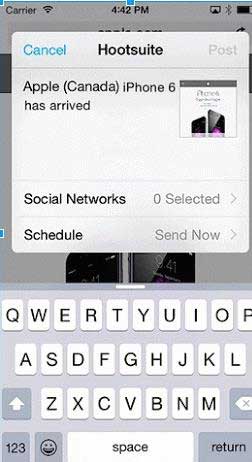 Send that ad set to the archives. This week Facebook made it possible to archive old campaigns instead of just deleting them, making it easier to go back and look at old data if needed. Archived objects are read-only and you cannot reactivate them. You get a maximum of 1,000 archived campaigns, 1,000 ad sets, and 5,000 ads at a time. Facebook recommends deleting archived ads 28 days after their last date of delivery.

Need a Facebook demographics cheat sheet? Mashbout's prepared a short-and-sweet infographic to remind you who you're dealing with on Facebook: 81% of daily active users are outside the US and Canada, 56% of US residents use it, and 66% of users are Millennials. Bonus: Facebook users have closer relationships and are more trusting—but also more politically engaged—than most people. 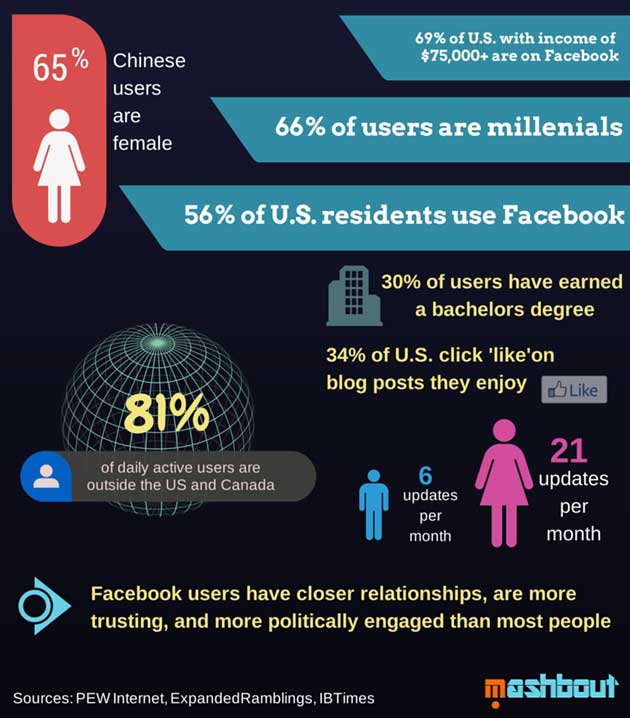 How other marketers social it up. Adweek's combined a couple of timely reports to provide an insightful glimpse into how other marketers approach social media: 97% say they use some form of social marketing, but only 37% are able to measure ROI—even among the biggest marketers, 78% of whom are struggling with measurement. For most, the top priority is building brand awareness (39.2%), followed by building preference (29%), after which they hope to drive leads or sales (15.2%). So smile! If you feel lost sometimes, you're not alone. 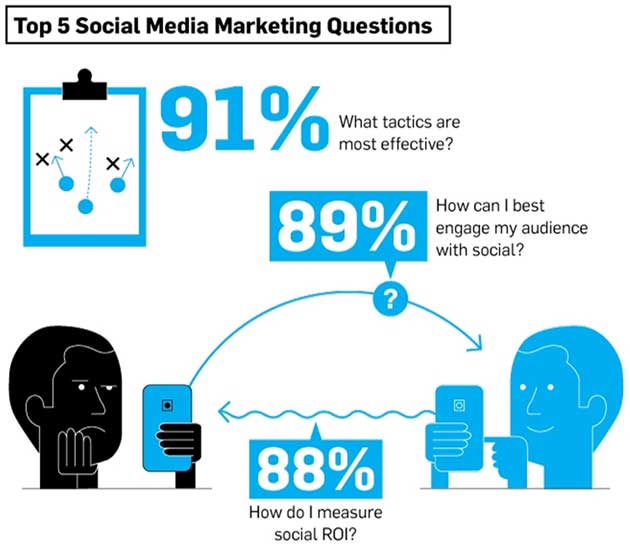 Spending more time on social apps? That's no surprise. A Localytics report finds that time spent using social networking apps rose 49% year over year due to strong "snacking" behavior (people nip at something they like, then move on). Music app engagement had the biggest increase (79%), and health and fitness apps followed at 51%. It's not even New Years yet! By far, however, social network apps had the most app launches per month, at 25.1 launches per month on average.

We'll wrap with an example of the Simpsons imitating life. Hot off buzz about Scotland's independence vote, the Simpsons published a clip featuring Scottish character Groundskeeper Willie proposing himself as the leader of an independent Scotland. Apart from the fact that most anything Simpsons-related is social gold (the video's got 3.7 million views to date), this also highlights the ever-thinning line between entertainment and the real world. Users need to know you can play in both sandboxes without losing your identity, which shows them you've got depth, not just style.