Get the skim on Ello's self-imposed ad ban and Taco Bell's attention-grabbing social wipeout. You'll also see how YouTube video shares stack up against native videos on Facebook (not well), and find new ad offerings on Tumblr and Snapchat. Skim for the social score.

Potty-mouthed princesses for parity. Topping this week's Viral Video Charts is FCKH8.com's "Potty-Mouthed Princesses Drop F-Bombs for Feminism." If you think the F-bomb is bad, these "Swear Jar Princesses" have worse words for you: "Pay inequality" and "rape" are just the warmup. The video's generated controversy, both for its approach and because, at day's end, a passel of little girls are parroting from a script written by adults: In this case, the for-profit FCKH8, which hopes to sell T-shirts for a small charitable donation. However you feel about it, it's kicked off a discussion that might help people better define what it means to raise girls (and boys). You don't even have to buy a shirt for that.

One way to get a point across. To drive traffic to a new app where users can build orders and place orders in advance, Taco Bell blacked out its Twitter, Tumblr, and Facebook presences—at least temporarily. The campaign, dubbed #onlyintheapp, drives all users visiting its social media sites to a single message (the Twitter example is shown below). All other posts on its social networks have been deleted. A bold move: the brand boasted 1.4 million Twitter followers, all of which have vanished, leaving it with just over 4,600, likely gained after the campaign began. Talk about commitment to a single message.

Where cosmos and royalty collide. Stephen Hawking and Queen Elizabeth have joined Facebook and Twitter, respectively, which speaks to the power social networks wield in our culture: To have a voice, you must be present on the public forum. As a handy example of social's democratizing power (for better and worse), the Queen's getting tweets demanding selfies and her views on X-Factor. Meanwhile, on Facebook, Hawking put his kids on deck for the #IceBucketChallenge:

That's no accident: Now that Facebook's got its own video player, YouTube videos are published like article thumbnails on News Feeds, whereas native Facebook videos appear in full size; plus, they autoplay, a huge plus for brands. To illustrate the shift, Budweiser posted 60 videos to Facebook in May, 50 of which were hosted on YouTube; by September, those numbers reversed. Beyoncé's also going native: In October, all six of her video posts were native Facebook videos, whereas all seven of her video posts in January were hosted on YouTube. Where Beyoncé goes, the market follows. 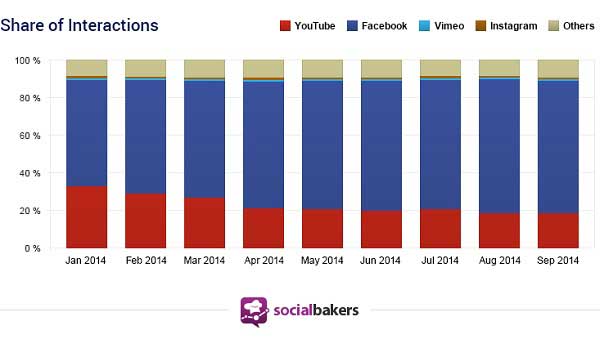 Autoplaying ads: Now on Tumblr. Tumblr's integrating auto-playing "sponsored video posts," which started rolling out on users' dashboards this week. Pilot brands include the CW, Lexus, JCPenney, and Hulu. The feature supports Vine and Instagram videos, enabling advertisers to easily reuse videos created for other platforms, then pay on a "cost per view" model. Like on Facebook, video ads will be muted by default until the user opts for sound. Per Yahoo CEO Marissa Mayer, Tumblr's expected to generate $100 million in revenue in 2015. We can guess where most of that money will be coming from, considering where video ad spend's heading: 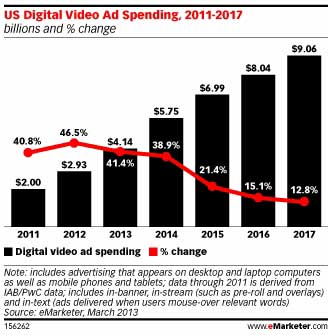 Twitter: Cashflow up, Buy button pending. In Q3 Twitter earned $361 million, up 114% from the same time last year; 85% of its revenue came from mobile ads (see a trend?). Overall, ad revenue rose 109% versus last year. Today Twitter boasts 284 million average monthly active users, up 23% year over year—which looks great on paper, but growth is slower than in Q2, when it attracted 16 million new users versus Q3's 13 million. But don't worry... in 2015, Twitter will roll out its Buy button, which will boost its value for both impulse buyers and the marketers who love them.

Take your Twitter pics elsewhere. Twitpic, a popular platform that let people upload images to post on Twitter, shut down on October 25th after losing a trademark conflict with Twitter. There is one small plus: Twitter acquired it, so your data is safe and existing images will stay live (for now), even though you can no longer use Twitpic to upload images.

I'm happy to announce we've reached an agreement with Twitter to give them https://t.co/OmGQHVKG0n. More here: https://t.co/IiASPzMoW4

Snapchat unveils its first ad. And it's for "Ouija," a Universal Pictures horror film based on the board game which, like Snapchat, relied a lot on disappearing messages. (Or disappearing messengers.) How apt! And like Facebook and Tumblr, Snapchat's fallen under the thrall of video (and the $6 billion advertisers plan to spend on it this year): The ad is a 20-second trailer, edited to resemble a "Snapchat Story"—a series of "Snaps" combined to form a narrative. If you're looking to test a social video format, Snapchat's price is "certainly competitive," a Universal spokesman said. That isn't something you're likely to hear from a Facebook video advertiser.

Below is a GIF of the ad, via AdAge.

Where's the next Facebook? For the future-forward among you, Eleanor Ross lists little-known social networks (and underlying arguments) that businesses should start testing. Ello, of course, tops the list. But have you heard of Edgee, which helps you "intellectually explore" the same way Pinterest lets you discover images? What about Procurious, a socnet for procurement and supply chain professionals? Bet that one wasn't on your list. There's also Tagstr (shown below), which lets businesses share audio content on the go.

Ello bans itself from advertising. Ello—which just raised $5.5 million—has registered itself as a public benefit corporation, forcing it to abide by its own ethical principles, which include never running ads, selling user data, or selling itself to a company that would. Impressed as we are, this changes Ello's proposition for marketers: Any activity on the socnet should feel (and be) granular and personal, since users are likely to reflect the same ethics code Ello does. (So... it may be a bad place to punt a burrito discount, but it may be wonderful for gathering feedback or planning a VIP social gathering. Keep promotions to a strict minimum, though—save the mainstream stuff for Facebook.) 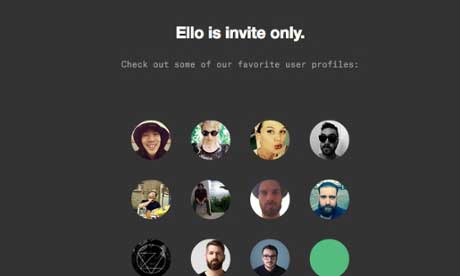 Need it ready-made? Go Redditmade. Reddit's leapt into crowdfunding with Redditmade, which lets subreddits (topic-specific Reddit forums) create their own merchandise. The site's appeal lies in its community aspect: Users bound by a given passion can easily design basic products and surrounding campaigns. If enough people pledge to buy it within 30 days, Redditmade will put it into production—and you can either keep the profits or donate them to a person or cause, making it easier to rally around a cause without pinching pennies. Grassroots is back in style. 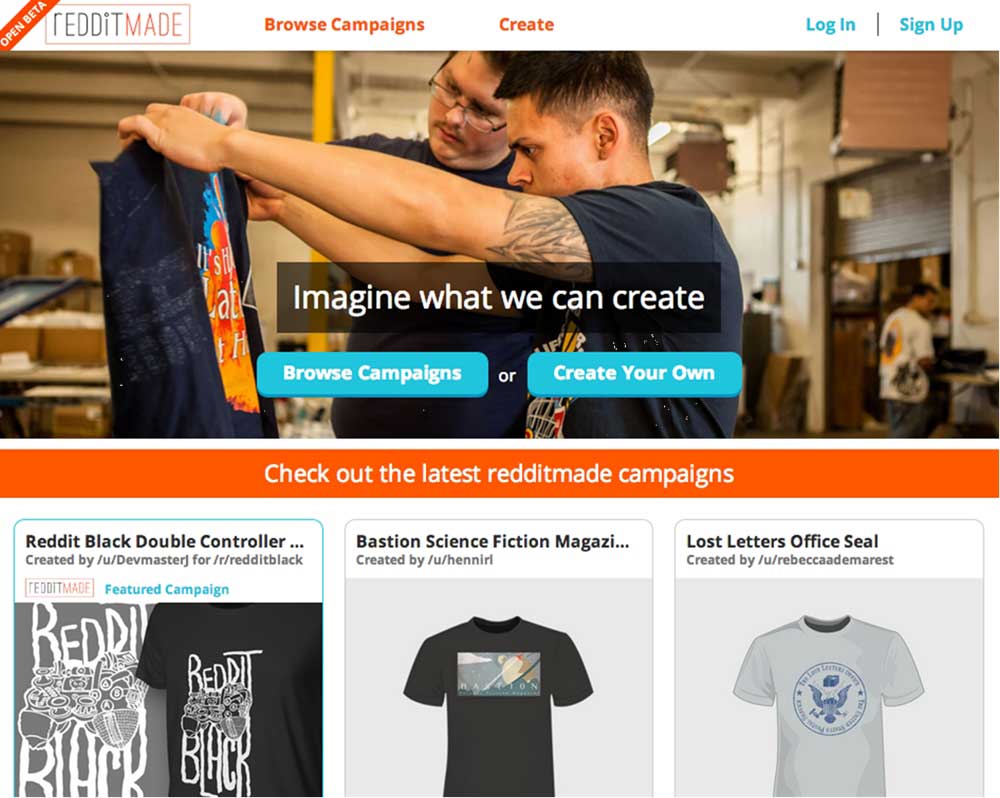 We'll wrap with a throwback to Clueless. The magical software Cher used in the movie to pick out her clothes is now a social reality. After a two-year beta, socnet Cloth is now public. The app lets users archive their "looks" and share them with others across other networks. A special functionality even provides the day's weather and proposes an outfit that will suit you best that day. One less thing to think about in the morning. If you're looking for inspiration outside your own closet, you can also check out what others are wearing based on weather and location—making the app interesting for marketers looking to slide ready-to-wear products or accessories into people's everyday lives, based on moment-relevance. If you're already on Pinterest or Instagram, Cloth is a promising new frontier.