'Tis the season for best-ofs and top-tens. We've got Facebook's Year in Review (plus the skinny on its new “Google-killing” search feature), trends for 2015, Instagram's challenge to Twitter in the usership arms race, and the 10 most-shared video ads of 2014. Skim for some holiday cheer.

The world just can't get enough of Minions. Topping this week's Viral Video Charts is a holiday message from AMC Theatres, which used the Minions, beloved characters from Despicable Me, to punt free popcorn when you buy a $30 gift card. Just in time: the holiday season is when families hit the cinema more often than couples do. And at nearly 4 million shares on this Facebook post, looks like AMC knows it. Time to go to the movies?

The 10 most-shared video ads of 2014. The built-in optimism and competitiveness surrounding sports are always an easy bet: Unruly finds that Activia's World Cup-themed "La La La", featuring Shakira, was the most-shared video of the year, with nearly 6 million on Facebook, Twitter, and blogs since its May launch—meaning it's also the most-shared video of all time. To think that a digestion-aiding yogurt managed to seize that title! Also, the speed of sharing doubled, with 42% of shares happening in the first three days of a campaign launch on average, up from 25% in 2013.

Facebook's year in review. Facebook's released its Top 10 lists for topics, places, athletes, entertainment, and more. The biggest topic of the year? Ebola (surprise!), followed by the Ice Bucket Challenge. Speaking of the latter, it's got its own category: George W. Bush's video was the most-shared, at close to 600,000 since August.

Can better Facebook search help brands? Facebook's released two major updates: It's bringing Trending topics to mobile, which includes articles on the topic, posts from people involved, updates from your network, and real-time reactions. The second is a more robust Search feature that lets you find older posts more easily. The latter sounds innocuous, but it's getting the most attention: Time magazine thinks stronger search on Facebook will kill Google Plus. And Razorfish's Matt Heindl, talking to Digiday, says better search will give good brand content an organic boost, because searchers may find content they didn't see the first time around. Ephemeral's no longer the name of the game. 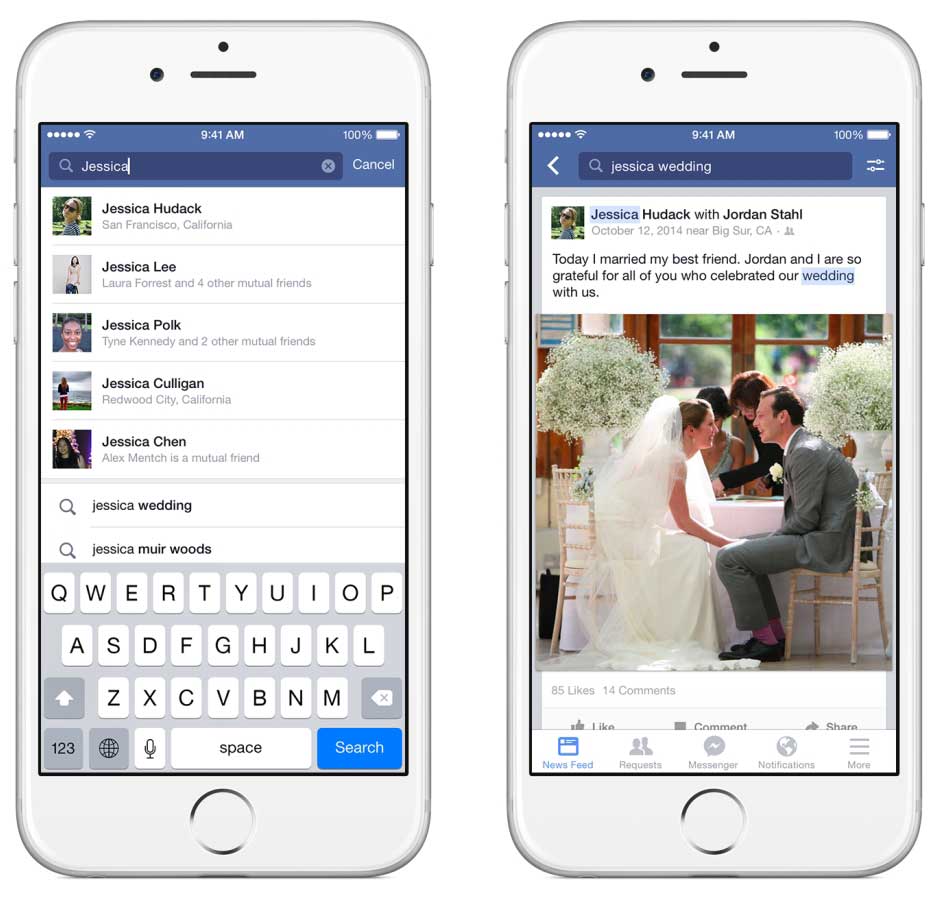 So is a Google Plus company page still worth it? Yes, says analytics firm Rival IQ, which provides six reasons it makes sense (despite popular opinion). A few: a growing and engaged audience, clout in organic search results, and prime real estate when somebody runs a search for your company (updates from your G+ company page—like that below—will appear on the search results page). Also, now you can pin posts to the top of your page—making it easier to promote special content for a longer period of time! 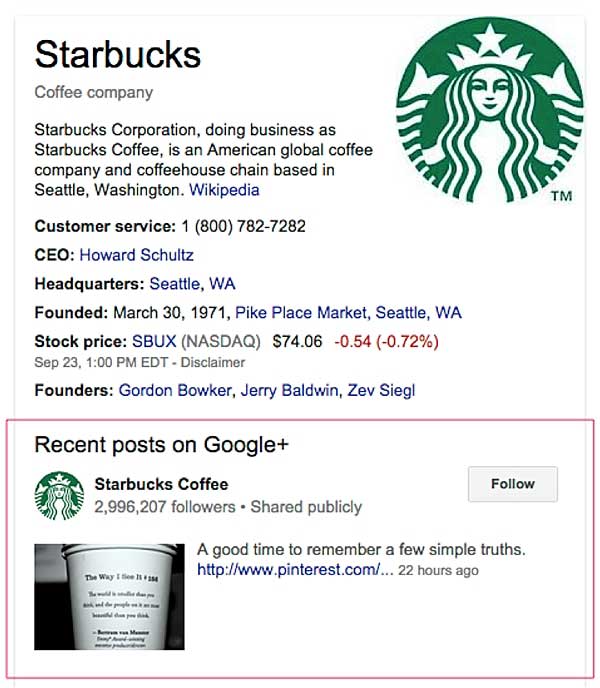 Instagram is now bigger than Twitter, with 300 million monthly users, up 100 million since March. That's nearly 15 million more users than Twitter (which has 284 million users). Like Twitter, it also plans to start issuing Verified accounts for public figures and brands, and removing fake accounts (so expect to see your follower counts decline slightly). Facebook, which bought Insta in 2012, must be preening its feathers. Here, find out which of its 300 million users Instagram CEO Kevin Systrom likes best. (Photographer Kathy Ryan is one.)


Facebook video's giving YouTube a run for its money. Heineken, which has been testing Facebook's auto-play video ads, is now on the record about its results: "YouTube and Facebook are equal players now, or at least close to it," says senior media director of marketing Ron Amram of Heineken USA, who adds, "We have to consider Facebook as the key video partner going forward because not only does it have the reach but the effectiveness." In October, Heineken's digital spots were exposed to 35 million users' News Feeds in three days, producing 5.5 million views—16% of viewership. And sister brand Dos Equis got $3.35 back for every dollar spent for a Cinco de Mayo video campaign, lifting sales 6.6% from last year.

Ford's 2015 trends to watch. One of the best ways to win on social is to reflect values that people consider forward-moving and in line with their own. Accordingly, Ford's released its global trend guide for businesses, including details on the newly rising Generation Z (what comes after Z, we wonder?), new definitions of family (good friends count) and romantic companionship, and a fresh update on the success vs. failure paradigm. Take notes! (Or just Pin the infographic.) 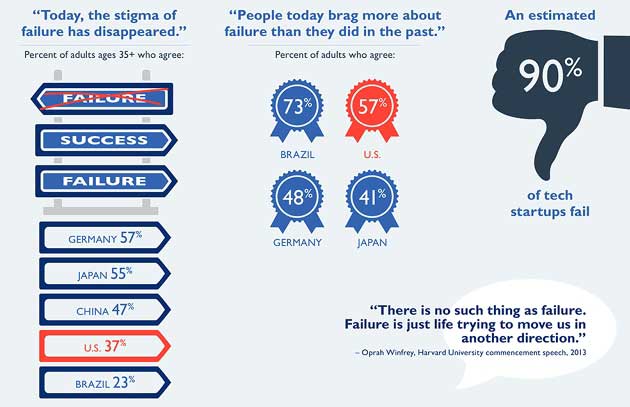 Say hello to Snapchat geofilters. Snapchat's released a once developer-only functionality to the rest of its userbase: Now you can create posts that can only be seen by people in a specific location, making it possible to share surprise discounts or services with Snapchat users who are currently in-store (or organize campaigns where they can share special content in a chosen area). Pair that up with Snapcash, and you could be looking at an impulse-buying boom!

What makes Millennials engage with brands on social? The Center for Marketing Research's latest study finds that the vast majority (84%) on Facebook do it to support a brand. On Twitter, 85% do it for a coupon or discount; and on Pinterest, 76% of Millennials are most keen to share their interests or lifestyle. The study includes details on most-liked brands on each network (for Facebook and Twitter, it's Nike). And 31% say they've purchased something after liking, tweeting, or pinning it online. While we're on the topic of pinning, here's a visual guide to consumers' relationship with Pinterest. 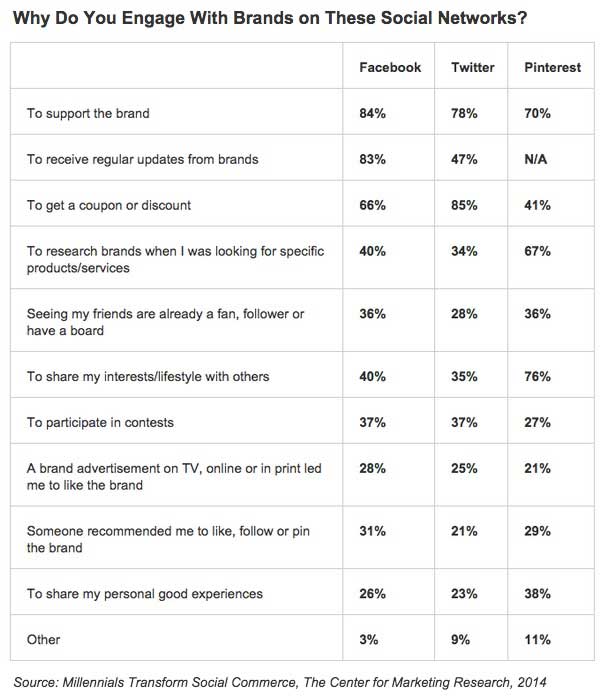 We'll wrap with a rewind. A YouTube rewind, that is: "Turn Down for 2014" is a musical wrapup of the moments, memes, and people that drove views over the course of the year. Expect selfies, some Happy-inspired dancing, and a playful Ice Bucket Challenge throwback. Hey, this may be the last time you ever hear Frozen's "Let It Go" again—unless your kids insist on a reprise during New Years.