Get the latest this week—including the dress that launched 10 million views, the brand that won the Oscars, top branded Vines, tips for making strong Facebook video ads, a new Pinterest ad unit, and follower analytics for Instagram. Skim to win the day.

Today in mind-benders. On Thursday night a post hit trending status on Buzzfeed, drawing over 10 million views in five hours: A Tumblr user uploaded a shot of a bicolor dress and the Internet flipped out. Over half of users see it as white and gold; the rest see black and blue. (We saw white and gold, then flipped out when we moved our computers around a little—and saw it change to black and blue.) Twitter and Facebook went bananas and flooded our feeds with arguments about who needs glasses. "What is eyesight?" one flummoxed commenter wondered; thankfully, Wired produced an explanation quite quickly. Meanwhile, one brand acted fast:

We promise, we aren't messing with you. This dress is blue and black. #TheDress #Blueandblack #WhiteandGold pic.twitter.com/pI92V96uLX

What brand killed it at the Oscars? There weren't any epic selfies this year, but Samsung still outdid any other TV advertiser in positive social media sentiment, per 4C Insights. Samsung scored a brand affinity lift of 24% on Twitter and Facebook with help from seven minutes of airtime from ads and in-show activations. One ad plugged its high-def TV with a celebration of moments we love sharing; another (shown below) glorified the stories we can make with the right mobile tools. Social sat at the heart of both. (Speaking of: 13 million people saw Oscar-related tweets this year.)

Facebook targeting gets even more granular. Just in time for the show, Facebook added new ad targeting options to its list of categories. Prior to the Academy Awards, you could target for "The Awards Show" under the "Seasonal and Events" tab. Other new options include Cricket 2015 (under the same category) and Asian-Americans (under "Ethnic Affinity"). Screenshots here. Now your ads can feel more personal than ever.

Make winning Facebook video ads. At Social Media Week, marketing firm Jack Morton Worldwide shared insights on how to make a Facebook video ad that cashes in. There are five keys total, but here's one: Ensure the first three seconds grab people. The ads autoplay, so you have to seize the moment before the user scrolls past the video and it stops playing. (Facebook also determines a video's been viewed after the first three seconds.)

This week in top Vines. Unruly and Marketing Magazine gathered up three must-watch Vines: One for the HP x360 in which the Viners actually end up breaking a real laptop; another HP Vine for binge-watching the Oscars; and an Oscar piece by Sprint to showcase its unlimited data plan. Are you sensing a theme here?

How B2B marketers use social media. Real Business Rescue's made an infographic detailing all kinds of facts about social media use by B2B marketers. Nine in 10, for example, say its No. 1 benefit is increased exposure. Facebook, Twitter, and LinkedIn are their top socnets, and challenges include lack of a strategy, difficulty proving ROI, and lack of time. Below is a slice of the chart that highlights what types of content they use most often: 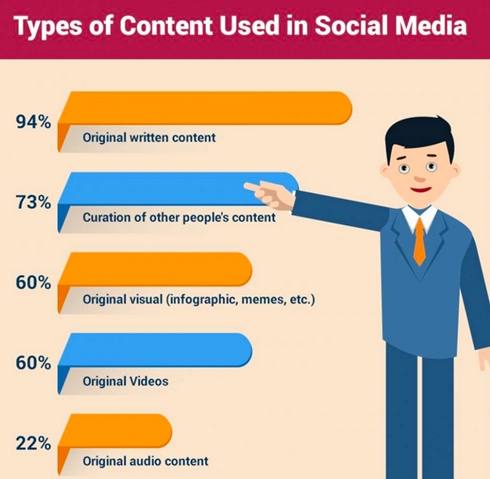 The Instagram sweet spot. A Latergramme analysis yielded the best time to generate the most likes and comments on Instagram: 5 PM EST on Wednesdays (or barring that, 2 AM). But the most engaged time will differ from day to day: The 5 PM trick doesn't work on Mondays, when engagement is highest at 7 PM and 10 PM, for example. Wednesdays get the most engagement of all days. 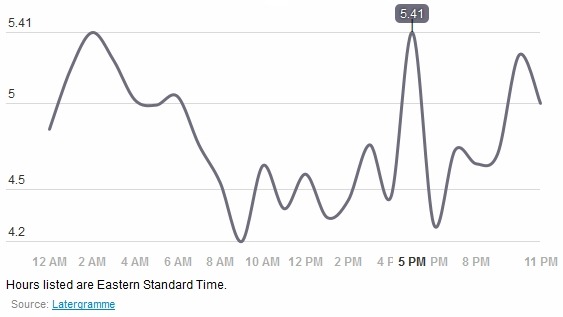 For an extra Instagram boost, check out SocialRank's upcoming follower analytics tool. The Next Web has early-access codes!

Style, pin, and shop? Pinterest's planning a "multi-pin carousel" ad format that lets marketers include multiple images into one promoted Pin. It isn't clear when the format will hit the market, but it makes sense, since Facebook already has a multiproduct ad and Twitter lets users add multiple photos to a tweet. Neither format's been used much by marketers, but things might be different for Pinterest, which has a strong fashion following: Imagine the stylish combinations brands like Sephora or the Gap can push, all at once, for creating the "perfect look." Pinterest is also developing a "Buy" button that lets users purchase directly from the site instead of jumping to another one.

We'll wrap with Big Birdman. In a stroke of genius, Sesame Street created a parody of "Birdman," which won the Oscar for Best Film. In it, Big Bird plays Big Birdman, and the tortured soul he torments is Carol Spinney—who's voiced Big Bird since 1969. The parody uses the same continuous tracking shot that characterized "Birdman" and playfully parodies the protagonist's crisis of self worth. Our favorite line: "How many different ways can you learn the alphabet? Lots, apparently." We wouldn't mind if our inner demon were Big Bird.