All of life's a glass menagerie. This week, watch Don Draper get divorced on Facebook, and learn all about the just-released carousel ads for Instagram. And look... Facebook just brought Messenger to the Web—finally! Skim to keep the tables turning.

At long last... and partners include Banana Republic, Old Navy, Showtime, L'Oréal Paris, and Samsung. Carousel Ads let people scroll horizontally through an "album" of photos, after which you can drive them to a page where they can learn more or purchase. Check out examples of how advertisers have used them.

In case you ever wondered what that might look like, Vanity Fair's jumped on the launch of the last half of the last Mad Men season with "Don Draper Gets Divorced on Facebook." It's a fun way to relive the '60s-era ad man's trajectory across the platforms people love both openly (like Twitter) and secretly (like AdultFriendFinder). You even get to see Don lurk all over Megan's Facebook pics. Way to seize the moment!

You'll find it at messenger.com , and it's a fuller-sized version of what you see when you check Facebook messages, which transforms Messenger into a competitor to Google Hangouts or even Skype (you can make calls and video-chat).

Don't worry... unlike on your phone, Facebook won't cut Messages away from its core page, but it wanted to create a way for people to access missives without getting lost in the time-suck that is the News Feed.

In the weeks to come, expect to see new languages, payments, and third-party apps roll out—making it a possible hotspot for monetary exchanges and other peer-to-peer activities for people who want to use them without getting lost on some old high school friend's profile.

Traffic to the site is heavy: Just hours after launch, it was already down. 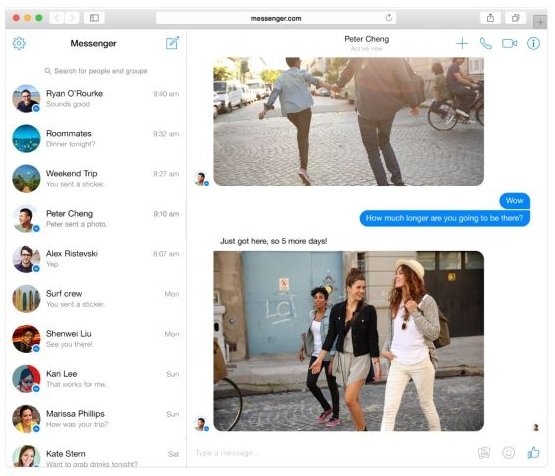 Other additions include two new filters: Color, which lets you "tint the highlights or shadows" in a photo; and Fade, which lets you soften colors. Your inner art director just squealed.

An IBM report details the difference between Gen-Yers, Gen-Xers, and Baby Boomers in relation to making B2B purchases.

The findings may surprise you: When they're researching products and services, the information Millennials most rely on comes from the vendors themselves! Gen-Xers, on the other hand, rely most heavily on third-party articles, blogs, and reviews. (Baby Boomers love tradeshows.)

Because of that key difference, Millennials most value communicating with vendors. But don't lace up your door-to-door shoes: They'd rather do it remotely, with 69% preferring email. Only 24% want to meet face-to-face. 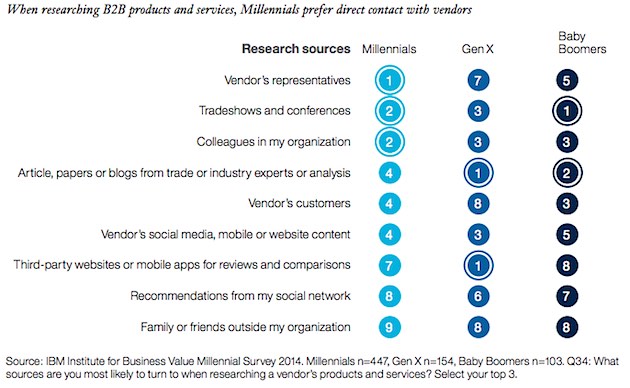 YouTube's adding interactive cards to its TrueView video ads, which lets marketers add information to in-stream advertising in the form of overlays. That makes it possible for viewers to take an action after the ad (instead of just skipping it), creating a new opportunity to engage them: Drive them to more details, products, related videos, playlists, and—eventually—also to your website. As the advertiser, you'll be charged for either a view or a click, not both.

In a letter to video creators, YouTube CEO Susan Wojcicki said the company plans to offer fans "an ads-free version of YouTube for a monthly fee." Advertisers will not be able to opt out… but, the letter adds, "we're confident this latest contract update will excite your fans and generate a previously untapped, additional source of revenue for you." We'll see about that. 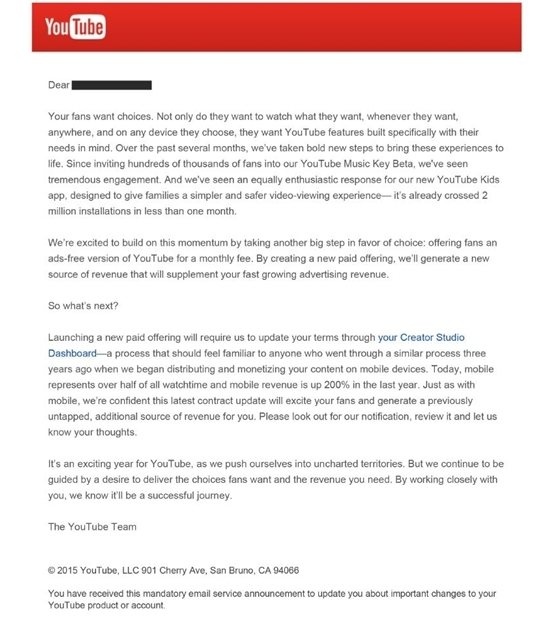 7. More reasons to stay on LinkedIn

This $1.5 billion acquisition will likely increase the amount of skills development content that appears on the site, hopefully hiking up the time professionals spend there. Related advertising costs on LinkedIn might see a bump as a result—but you may also be able to reach people who are training in the skills you need. 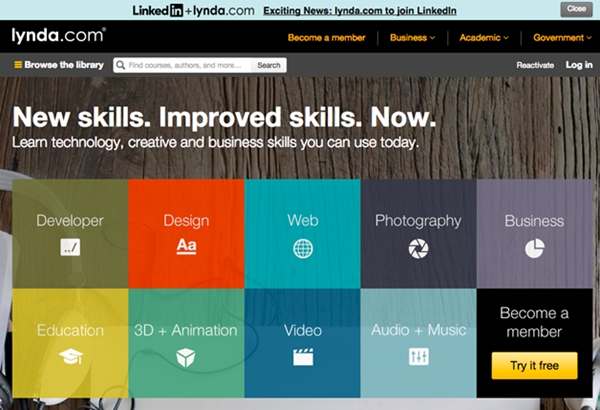 A Pew study on teen social networking activity finds that Americans age 13-17 still use Facebook the most of any other socnet, at 71%. At a close second is Instagram (52%), followed by the rapidly growing Snapchat (41%). Here's the bigger shocker: Twitter and Google+ are tied in fourth place, at 33%.

However, teens also divvying-up their social time, with 71% using more than one site out of the seven networks they were asked about. So it still pays to diversify... but you'll still need to pay to stay visible on Facebook. 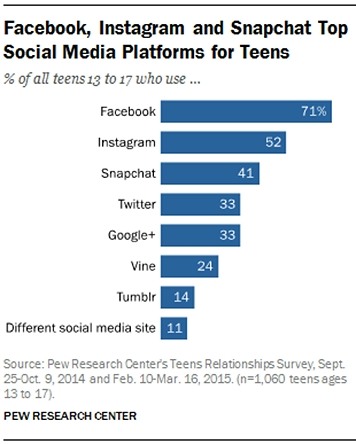 Facebook summed up Ad Week Europe's trends in this short-but-sweet article, with a more visual and detailed expansion of the themes here. A few points worth noting: For consumers today, the small screen comes first (so ensure your messaging is mobile-friendly). Visual communications, like video and photos (but especially video!), are crucial. And your integrity remains your biggest currency—especially on social.

Think "Game of Thrones" is fiercely competitive? Compare it to the social sphere, where battles for dominance have altered the playing field unrecognizably in just eight years.

SHIFT VP of Marketing Technology Chris Penn writes that in 2007 SHIFT CEO Todd Defren commissioned a map of social media platforms to better visualize the space. The map featured huge swathes of space devoted to MySpace, with smaller portions cut out for Friendster, Classmates.com, and Xanga. Facebook was competing for territory with LiveJournal: 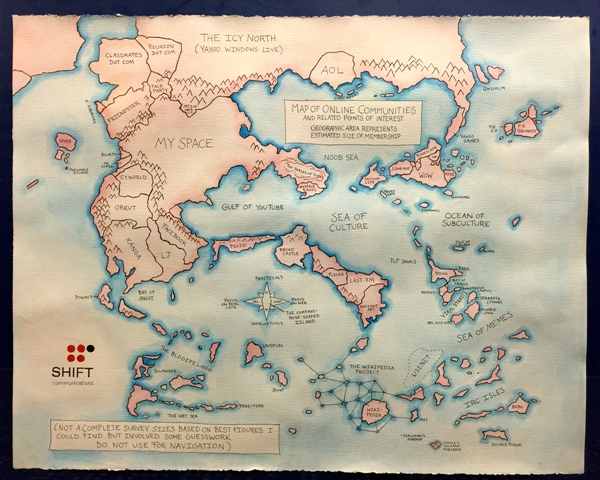 In an updated version of the map, that same universe has seen huge tectonic shifts: Google and Facebook have their own respective thrones, flanked by the smaller kingdoms of LinkedIn, Instagram, Twitter, and Tumblr.

Most interestingly, the sea is no longer dotted with fringe communities; instead, it neatly divides the massive continents of Western World social and Chinese social. How will things look in another eight years? 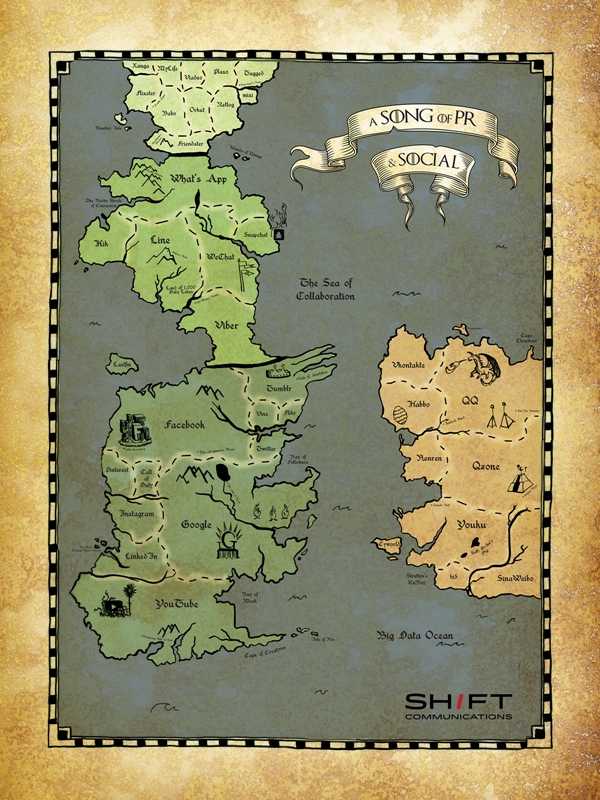