Find out how you can use deep-dive Twitter searches to improve your marketing. You'll also discover how to download your LinkedIn contacts' email addresses, up your Instagram game, and get a grip on what's going on with Google's Alphabet soup. Skim to keep things sizzling!

Just a few: Analyze past launch conversations to inform your strategy for a new product launch, or create real-time data activity benchmarks for a new ad campaign based on historical volumes. You can also deep-dive into a customer's past interactions with brands when replying to a particularly hairy inquiry. Have fun data-mining! Wear a helmet. 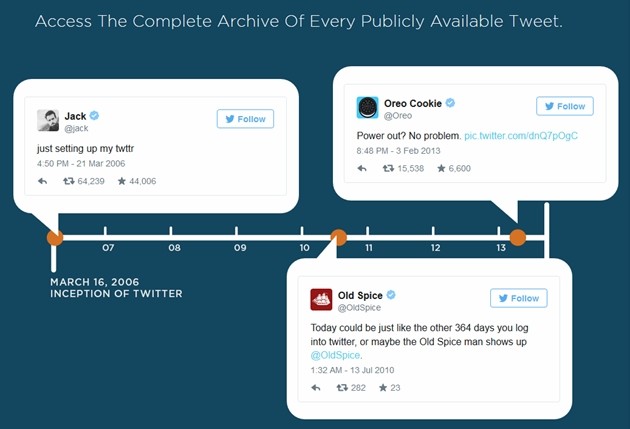 1. So what's the deal with Alphabet?

It isn't April Fools: Google's totally reorganizing, and it's creating a new parent company, Alphabet . The new entity will house Google's Internet arm and other enterprises, including Life Sciences, its health efforts, as well as Calico, its longevity research arm (among others).

Per Larry Page (now CEO of Alphabet), "This allows us more management scale, as we can run things independently that aren't very related." If you're a bit thrown off, you're not alone; Page explained it this way: "Google is not a conventional company. We do not intend to become one."

The next rational question: Will this change affect SEO or digital marketing? The short answer is no. The search engine won't change names, nor will any other major Google URLs. Core products like AdWords and Google Analytics will remain the same, and SEO will operate the same as always. So let that relieved sigh out! We'll update you if anything changes. 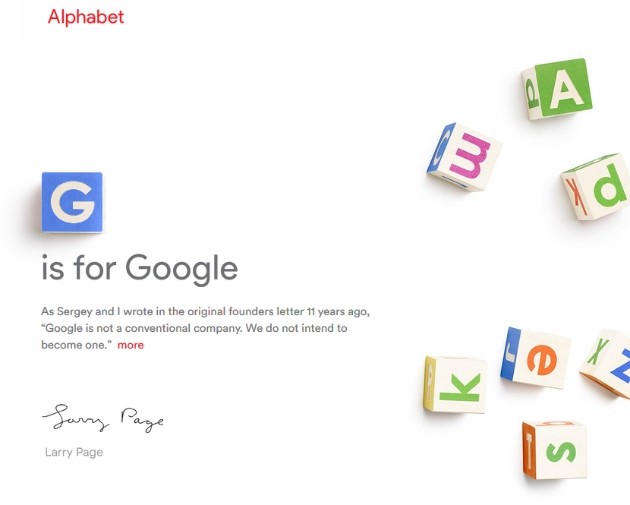 Twitter partner Unmetric's launched Sense, an iOS/Android app that lets marketers monitor competition in real-time. Use it to follow your nemeses' campaign images, videos, and hashtags, and to see how they're responding to major trends in the culture—or simply how they orchestrate social product launches. 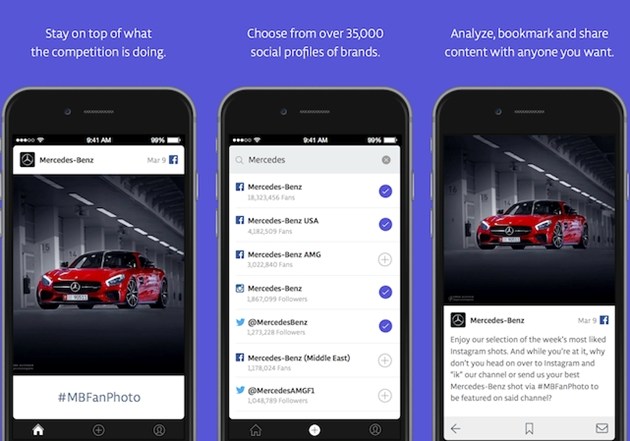 Nothing like a super-simple how-to video on a Friday morning. BrainCandy shows you how to export the email addresses of all your contacts on LinkedIn—where they're likely to keep that information up-to-date, no matter how often they change jobs.

Use this superpower wisely, and for a head-start on this one-minute video, have your LinkedIn open and ready so you can follow along.

Hilary Milnes wrote a well-considered manifesto about the benefits of adding an Amazon product page to your strategic mix. The main reason: Many of your customers likely research their purchases before pulling the trigger, and a detailed, creative product page helps set you a cut above the rest.

Focus on the "From the Manufacturer" section, where brands can speak directly to customers... without having to deal with a 140-character limit.

Per L2, 65% of brands on Amazon use colorful wording, enhanced images, videos, and rich product descriptions—things that, surprisingly, others shirk entirely. And the number of user reviews a product has directly correlates with how much a brand's invested in its product descriptions. So capture the imagination!

Below, a pretty example from Nestlé Coffee-Mate, which tricked out its "From the Manufacturer" section with imaginative recipes. 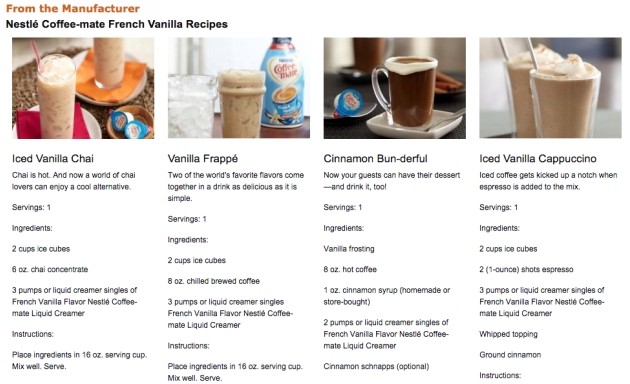 5. Amp up your B2B social strategy with these four tips

Jawad Khan breaks it down for you in detail and with stats and charts galore. Here's just one: Understand how B2B and B2B social media marketing differ. Both are sales oriented, but unlike consumers, businesses need multiple levels of approval before greenlighting a buy. That means you need to work hard to build a community, and court these businesses long-term with material they can use to unlock value for decision-makers.

Also, did you know that 80% of B2B social media leads come from LinkedIn... with over 86% of LinkedIn conversions coming from discussion groups? True story! Look down. 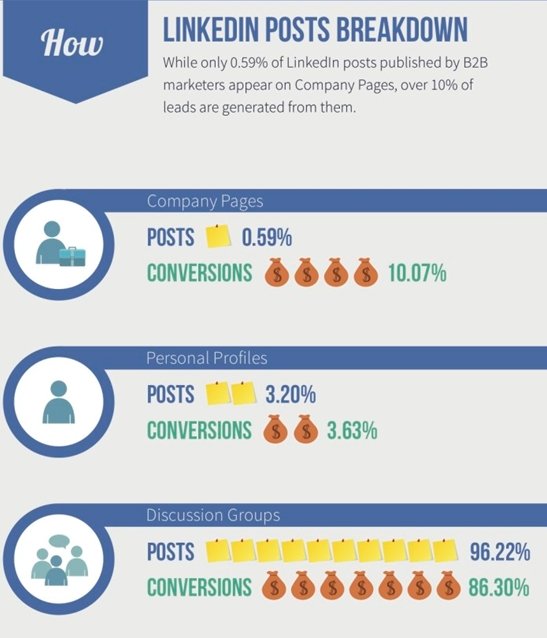 6. Find out where social e-commerce conversations are happening

A new infographic from Epictions and Pressly, drawing data from a content study, tells all. Where does e-commerce content get the best traction? Where do the best discussions happen?

LinkedIn is the most dominant e-commerce content platform in terms of shares, with 56% of the conversation. Twitter comes in with 30% of shares; meanwhile, Facebook and Stumbleupon (remember that?) top the charts for Likes and Comments. 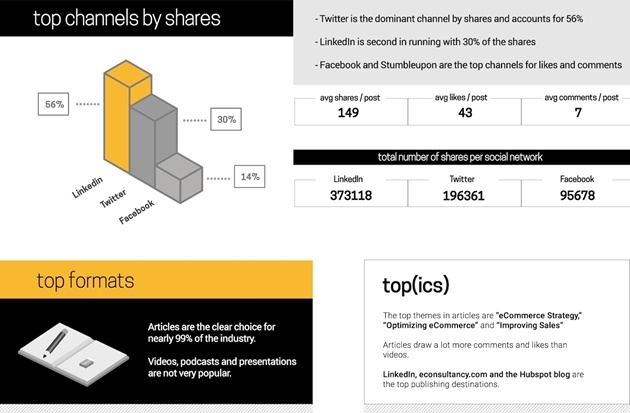 This is the marketing equivalent of finding a rare treasure in a thrift shop. The British Library, which has ambition of becoming the world's most open institution of its kind, released over a million public domain illustrations and images on Flickr.

Reuse, remix and repurpose them to your heart's content, because this collection has some strange and magnificent finds: Restoration-era cartoons, album covers, and even stuff from Burning Man.

The collection's also functioning as a fascinating social project: To make the collection more useful, it's asked the public to help curate the collection. Over 400,000 tags have been added to various images already—and thanks to them, the Library found over 50,000 maps in its collection, which it's now using to piece together a modern map.

Below, an image from "Songs for Little People," published in 1896. Don't you just want to Pin it? 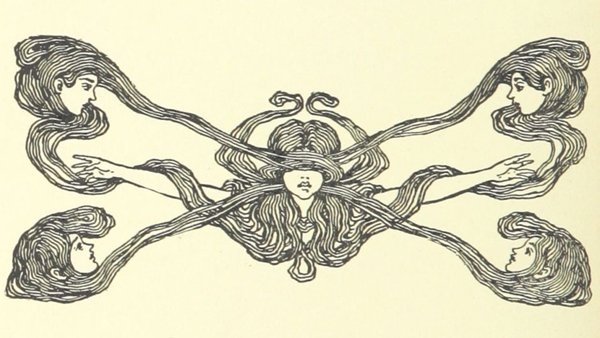 Remember that live broadcasting video feature that Facebook launched... just for celebs? Per TechCrunch, Facebook's replied to interested Verified Page members by promising that "In the future, Mentions will be available to Verified Profiles."

Access to mentions will also include access to Facebook Live—meaning known personalities, say in the marketing world, will be able to take advantage, too. (And not a moment too soon, because Line's already launched its own competitive livestreaming app for celebs.)

So glad you asked (because it's always testing something). A few other Facebook projects that may soon be relevant to you are a standalone News app (not surprising; consider its app just for Messenger), which could give marketers a unique captive audience for native content (sort of like Snapchat Discovery).

It's also testing carousel-style video viewing, which lets you watch a series of videos instead of just one. Below, Matteo Gamba shares footage of carousel-style Facebook videos he found. These were created by video-creation app Dubsmash (which is a Messenger Platform launch partner, so it would make sense that it would help Facebook test other cool brand stuff, too).

10. Periscope: An enemy of copyright?

Twitter's latest Transparency Report reveals that it's received 1,391 notices under the Digital Millennium Copyright Act for illegal streams on Periscope, the live broadcasting company it purchased... and Periscope is complying with 71% of those requests.

Demands ballooned since Periscope's launch in March: In April, there were fewer than 20 takedown requests; by June, there were nearly 1,000. The issue: brands worry users will use it to illegally watch events without paying for them, ranging from the Mayweather-Pacquiao boxing match (streams of which enabled many users to shirk buying it on pay-per-view), to the latest episodes of Game of Thrones. Oops.

Consider this the first in many case studies you'll likely see, now that Instagram's ad API is finally live. To push its "What's in your wallet?" campaign, Capital One gave three influencers access to its account, where they shared photos of the unique stuff they keep in their wallets (love letters, tickets, and photos, of course). Nine of their pics became Instagram ads, which boosted ad recall 16%, especially among Gen Xers and Baby Boomers. (Instagram: Not just great for Millennials!) Ad recall also rose 25% among people over 45, and, of course, brand favorability rose 3% among those age 21-24.

The moral of the story: give creative and imaginative influencers the freedom to interpret your brand vision (with a few attentive constraints; in this case, they had free reign in a clear-cut campaign). An authentic user vision has so much more impact than ordinary marketing collateral... and it speaks to everyone, not just younger people.

For inspiration, review this anatomy of a perfect Instagram post, coupled with the eight mistakes people most commonly make on Instagram. What, you thought we wouldn't have your back?

12. We'll wrap with a masterclass on great branded content...

...that doubles as a primer on how to use 360° YouTube video. The Vice Sports channel is now hosting The Moment, a Reebok-sponsored series that features high-quality branded videos with 360° angles. What better way to experience extreme sports for the first time?

The first episode features parkour master Ronnie Shalvis. For four minutes, he'll pull you in with flips that seem to defy gravity; once you're hooked, you're given the option to continue watching him in standard HD, or switch to a 360° view, which lets you maximize your experience, now that your interest has been piqued.

Check the experience out in the video below, where you can drag your mouse to change your perspective. Don't get dizzy:

Continue reading "#SocialSkim: Access to Every Public Tweet, Ever. Plus More Stories in This Week's Roundup" ... Read the full article