TrueView ads finally join the AdWords interface. We'll also talk about the latest format and messaging updates to Instagram, Google's logo change, and how wedding hashtags have become the "something new" in matrimony. Skim to stay informed.

Users who run TrueView YouTube ads in AdWords can take a breather. Whereas, before, finding them was next to impossible and they weren't connected to other campaigns, now you can find them directly in the main AdWords interface.

"Video campaigns" is now an option in the campaign selector tool. And ad groups are replacing targeting groups in video campaigns, which means they align with other campaign types.

Each ad group in a video campaign can have either an in-stream (skippable pre-roll) or an in-display (ad that appears alongside related videos) TrueView format. You'll be able to use bulk editing, upload in bulk, apply data filters, and schedule reports. Video analytics will also appear in a new Videos tab, and you can manage campaign and ad group targeting in the Video Targeting tab. Video Remarketing will be available in the Shared library. 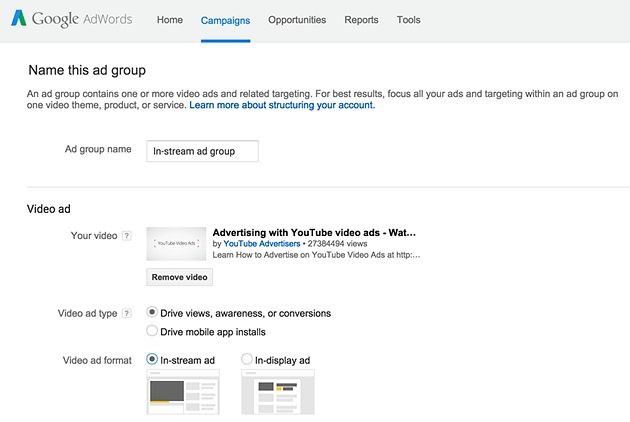 The socnets are aflutter! Google unveiled a new sans-serif logo design that uses Product Sans, the typeface it invented (and which its new holding company, Alphabet, already uses in its logo).

The identity shift aligns Google with where it's headed and where we already are: It's meant to scale and render seamlessly no matter what platform you're using (desktop to mobile), and the inclusion of iconography, such as a small microphone, reminds you that you can always interact with Google with voice. Google added that it's "a great reflection of all the ways Google works for you across Search, Maps, Gmail, Chrome and many others"—in other words, "simple, uncluttered, colorful, friendly."

Every once in a while, it's important to take a look at your brand and ask yourself whether it's evolving with new behaviors. Also... notice that Google+ wasn't on that list of primary use cases?

Here's a video of how Google's evolved right up to the present day:

2. Instagram makes it easier to chat with your photos

Instagram made a massive update to Instagram Direct, its private messaging tool (which 85 million use). Threaded messages make it easier to swap photos back and forth, and the appearance is more organized. You can also send oversized emoji to others, like people already do on Facebook, and a camera tool lets users respond to a picture with another, spur-of-the-moment picture—a bit like Snapchat, without the disappearing act.

You'll also notice that your stream includes a little arrow button under each image, encouraging people to use the messaging function more often, and making it easier to reply without using @ to tag someone's name. This last change is nonetheless surprising: @-mentioning makes up 40% of comments on public Instagram photos.

Now you finally have a place to share that gorgeous panoramic shot. Instagram launched the ability to upload landscape (widescreen) and portrait photo formats, as well as vertical video. This marks a huge change for the platform, which was defined in part by its insistence that all images and videos be square by design—cultivating a certain visual uniformity that's served its growth up to the present.

According to Insta, "The visual story you're trying to tell should always come first, and we want to make it simple and fun for you to share moments just the way you want to." Notably, vertical video is a Snapchat quality that's been popularized across other platforms, and it's more consistent with how people shoot videos on their phones.

Experiment with how these new formats can serve your storytelling. Brands testing the new features already include Ortega, Mountain Dew, Don Julio, and Ruby Tuesday.

If you're looking to get into Instagram advertising, now's a good time: Its video ads apparently cost just $0.02 a view, and we've got a list of brand don'ts right here. 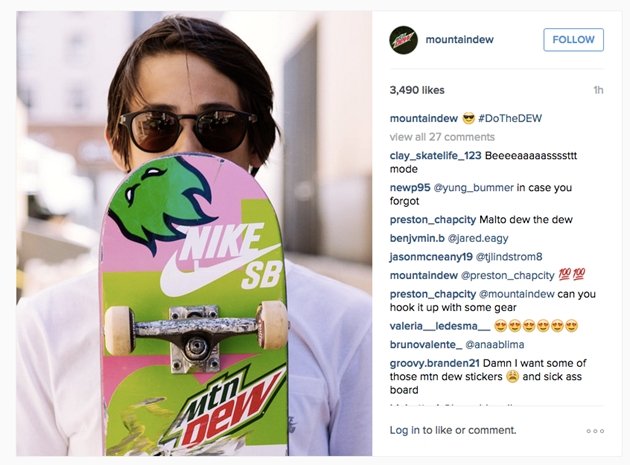 4. The MTV VMAs: The most-Tweeted program ever!

If you didn't watch the MTV Video Music Awards, you definitely read about it. Nielsen Social data found it was the most-Tweeted program ever since it began tracking in 2011—and the culprits were Gen-Xers (those over 35 years of age), not Millennials: 2.2 million US users posted 21.4 million tweets, for a reach of almost 12 million and 676 million impressions. That's an increase of 69% social engagement versus 2014. Facebook VMA chatter generated 39 million interactions, including posts, likes, and comments, from over 16 million users.

Some 78% of posts using the top event hashtags, #VMA and #VMAs2015, also came from Instagram. Taylor Swift, Miley Cyrus, Nikki Minaj, and Kanye West (of course) were the most-mentioned artists... and the top three Instagram posts all came from one source: @tishcyrus, Miley Cyrus's mother. Thanks, mom.

But the highest activity peak by far was the moment Kanye West accepted the Video Vanguard Award, a moment he chose to proclaim he's running for President in 2020. So... watch for that.

On August 27, Facebook hit 1 billion active users in a single day; one in seven people on earth used it, meaning the blue socnet remains the world's primary hub for social connectedness, and it's also a key source for both tracking—and defining—user behavior. Put together, the time spent by 1 billion people amounts to 60 billion hours over the course of a year.

Notably, Facebook launched a new ad campaign during the VMAs, encouraging others to use Facebook to make a difference.

Is making a difference on your mind?

Need to step away from your Facebook Page? Chris Ruberg, a social community specialist at OneCommand, observed that his Facebook Page admin menu now includes a new option (which is likely still in test mode): "show status as away." When he hovers over it, the following text appears: "Stepping out? Set your status to away for 12 hours. Change it if you get back sooner."

If you've got the capability now, use it to let users know when you won't be around. This feature won't just help slick their patience during low-use times, it will likely also be taken into account when Facebook starts distributing those "very responsive to messages" badges. 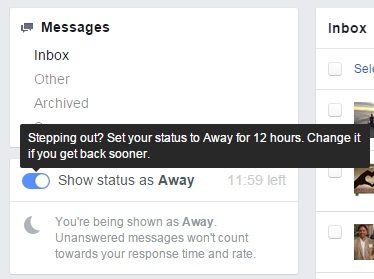 Tumblr's updated the way posts are reblogged to the site: Instead of just indenting past reblogs to the point of causing serious page margin issues, reblogs now appear as a neat list at the bottom of the post. This approach is great for brands and other users who appreciate a cleaner appearance on viralized posts, but teens are up in arms about the loss of the previous format, which they saw as a beloved platform quirk.

Specifically, role-playing users have complained most vocally; the redesign makes their storytelling (which builds from post to post) more complicated on the platform, and they have even accused Tumblr of using design to try driving them out.

The update also removed the ability to delete parts of a thread. Now you must either eliminate all the captions, or leave them all (less user-friendly). Below, a before and after of the reblog redesign: 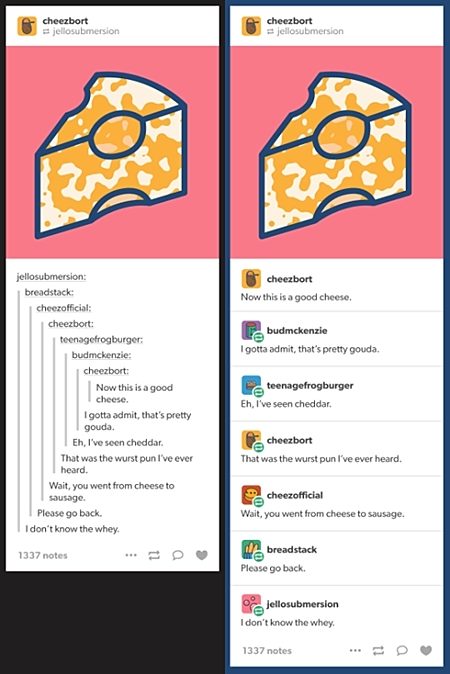 Twitter's opening up Promoted Tweets to 167 more countries and territories, spreading the range of its advertising further than the 33 countries it now serves. Most of its users are overseas, but the US accounts for 63% of its $452 million second-quarter revenue. Ads are currently offered in 15 languages, with 100,000 active users, including a number of small businesses. (To compare, Facebook had 2 million advertisers as of February.)

The answer is a resounding no, according to Acrolinx, which examined webpages (including blog posts and product pages) of 170 large global brands. All content was assessed based on quality and clarity.

Remember that as consumption habits for content rise across all platforms, production values do too; people don't just expect more content but better content. Less, but strategic and quality content, is better than a torrent of anything you can find. 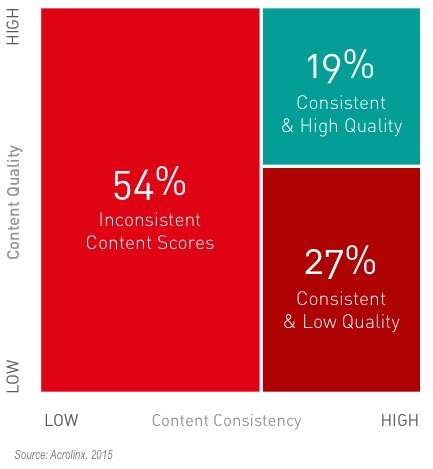 Wedding website TheKnot.com partnered with Mashable to check out the state of social wedding trends, and found out that wedding hashtags—which got their start in 2012—are now a marital must. In 2014, 55% of couples said they'd use a personal wedding hashtag, versus just 9% in 2012. Wedding hashtags enable attendees and wedding planners to share content around a given wedding under a unified umbrella across social networks; they can be simple (#SaraLovesBen) or cheeky (#HappilyEverEaton), depending on the couple's style.

Planning sites, such as WeddingWire, offer a hashtag generator for new members (it's produced 26 million potential hashtags since March), and wedding planners and photographers increasingly offer assistance in producing hashtags. As a result, couples are getting more creative and treating their weddings as a social media production in part.

A cottage industry of businesses building on the wedding hashtag craze has sprouted, including Wedding Hashtag Wall and Eversnap, which creates and prints hashtag cards in different styles, and produces a livestream of tagged photos to display during the wedding itself. 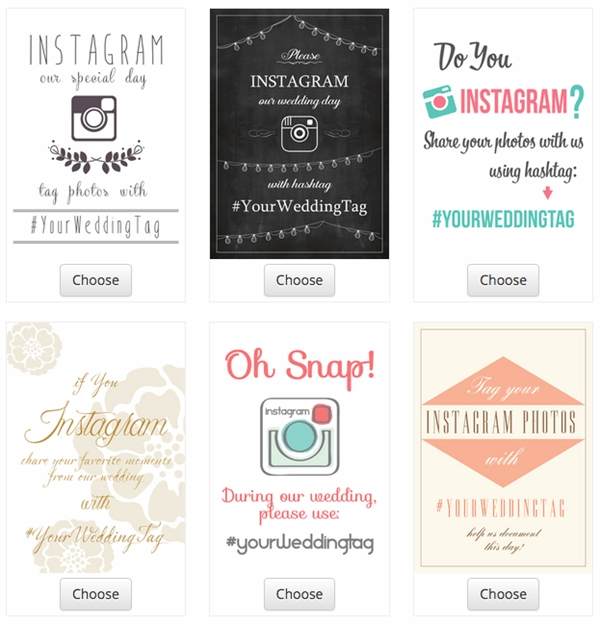 11. Don't hijack that hashtag just yet!

We totally advocate jumping on a running hashtag trend, but it's probably a bad idea to try highjacking a wedding-related hashtag... unless you have something valuable to offer the happy couple, and their attendees, on the big day. (In which case, go crazy! You have a captive audience.)

Hootsuite's put together a detailed list of things marketers need to know before hopping aboard an already-running hashtag train. It provides examples for when #trendjacking goes wrong, as well as how to recognize when a moment is right (when you're being trend-conscious, relevant, building on the conversation, and not directly selling).

One best-practice: if you're going to hop aboard a hashtag, try to tie it in to who you are without actually showing your product (unless it's done creatively, like in the Tim Hortons Game of Thrones hijack below).

Mother of Donuts. #GoT pic.twitter.com/YpjTX5wLC9

12. We'll wrap with something socially creative

In an exceptionally creative use of Instagram, Hyundai created a quiz on the platform that connects SUV buyers to the car of their choice. Overall, the quiz made use of 18 separate Instagram accounts with nearly 400 images, all of which led to one of three results: the Santa Fe, the Santa Fe Sport, or the Tucson. Try it here and get to brainstorming: How can you use the mechanics of a social platform to not only drive engagement but also tell a story in a fun new way?