Learn about Facebook's plans to charge advertisers only if 100% of an ad is seen. You'll also get the spill on its upcoming Dislike button, the story behind #IStandWithAhmed, and how Snapchat plans to make money on a platform quirk. Skim to stay on top!

The good news first: later this year, Facebook advertisers will pay for an ad only if 100% of it appears on a person's screen. This is great for advertisers, because now they feel they're paying for ads that were served but never seen (which does happen often).

But! Facebook won't consider how long an ad has been viewed before an advertiser is charged... meaning that if a user is scrolling through her News Feed too fast to properly see anything, you will likely get charged for the view anyway. Case in point, try spotting the ad below (thanks to AdAge for this fun game):

1. The story behind #IStandWithAhmed

This week, 14-year-old Ahmed Mohamed was arrested and interrogated, without the presence of his parents, for bringing a homemade clock to school... after a teacher assumed it was a bomb. The Internet expressed its outrage, rallying around the hashtag #IStandWithAhmed, for various reasons: because Ahmed is a child, and shouldn't have been treated like a criminal without cause; because he's Arab, which may have driven his teacher to a crass assumption; and because Ahmed is an actively curious maker, which the world can always use more of.

As the result of the attention his story received, many big players reached out on social to offer him opportunities and to extend support: Astronaut Chris Hadfield invited him to science show Generator in Toronto. Twitter proposed an internship. Mark Zuckerberg invited him to Facebook. And, not least, President Obama asked him to bring his clock to the White House. This is a huge tribute to social media's capacity to empower, and to unite decision-makers under positive human values and objectives. (Of course, Ahmed's already accepted the President's invite.)

Cool clock, Ahmed. Want to bring it to the White House? We should inspire more kids like you to like science. It's what makes America great.

Pinterest is partnering with Datalogix, and other third parties, such as Axciom, to show brands how effective their ads are at driving sales, online and offline. The relationship is expected to clear before holiday shopping season, but expect to wait as late as 2016 if implementation stalls. Datalogix helps brands see which customers viewed online ads before making a purchasing decision, which would help tie Pins to real in-store purchases.

3. So what's the deal with that Dislike button?

Rumor's finally giving way to reality. During a Facebook Q&A, Mark Zuckerberg revealed plans to publicly test a Dislike button, possibly as part of other alternatives to simply "Liking" something.

Unlike the downvotes on YouTube and Reddit, the button (he hopes) won't be about expressing negativity; instead, it will be about "expressing empathy." Consider news about the refugee crisis, which, generally speaking, feels weird to "Like." (Then again, it may also feel weird to "Dislike." We sense a learning curve ahead.)

For New York Fashion Week, the social network of choice is Periscope, which brands and stylistas are using to film live fashion. Twitter's even got a hashtag for it: #Fashionunfiltered, which you can use to follow the goings-on of the event.

"Periscope is like a teleportation device, it can take us into another world," says Twitter UK's head of fashion, Georgina Parnell. "It's all about giving people a view or an experience they've never had before." Content on Periscope—owned by Twitter—is watched the equivalent of 40 years every day, and fashion tops its strongest categories. The platform is now 10 million users strong.

Even if you're not working in fashion, consider those worthy insights: An app like Periscope provides a unique level of transparency that users rarely see. Using just your phone, you can actively tour them through your workplace, factory, event, or product features. Need help? We've got tips here and here. 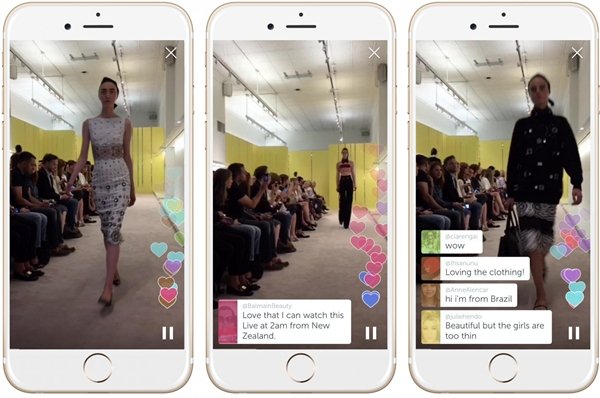 In a new shot at raising money, ephemeral messaging service Snapchat now lets users replay elapsed Snaps for $0.99. Users still get one free replay per day, which in Snapchat lingo are called "compliments." Snapchat claims that millions of Snapchatters may be frustrated at their inability to make multiple "compliments" daily. While that may be true, asking its primarily youthful community to pay for the privilege may be an overstep (see below); a number of third-party apps already offer the ability to save Snaps for free.

In case you're worried, the platform is still releasing free innovations to keep people Snapping. Consider Selfie Lenses. This is sarcasm, but that product is, for better or worse, very real:

The whole point of the internet is to NOT PAY for anything. GL @Snapchat

It isn't easy to think up creative ways to advertise on LinkedIn, so when they arrive, they're kind of a big deal. This is one: To advertise its Premium Economy cabin offering, Virgin created a LinkedIn job listing for a "Freelance Flyer." Clicking on "Apply on company website" drives you to a subsite where you can "apply" for the role with a 1500-word essay. You could win a trip from the US to London. Virgin wins lots of qualified emails for the price of a subsite and a LinkedIn job posting. Nearly 330 "applicants" have already applied. 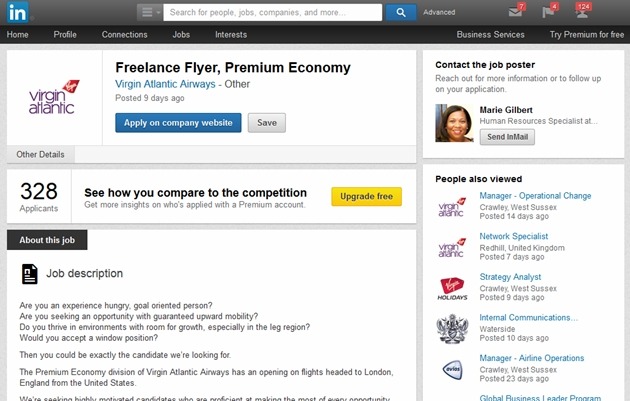 This infographic can tell you that, along with the number of #BacktoSchool photos people shared (589,101), how many people shared them (320,610), which brand logos appeared most often (Starbucks and Crayola), and which associated topics were most popular (#style, followed by #OOTD or "outfit of the day"). Pro tip: If you wonder why Starbucks won #BacktoSchool, it may be because 16% of its photos are fashion-related. Hey, it's good to know your target's #priorities. 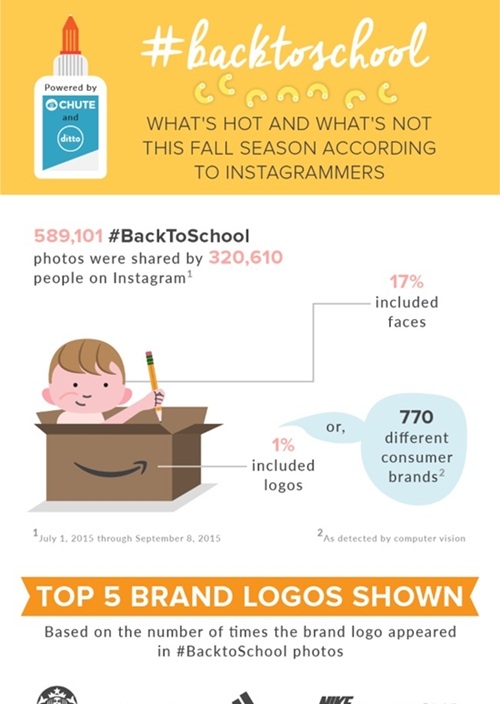 With help from Square, Twitter now enables anyone in the US to donate to US candidates via Tweet—giving people one less reason to leave the platform when a 140-character tirade's got their blood pumping. To accept donations, candidates must be verified by Square, after which they can tweet out a $Cashtag (a hashtag that facilitates transactions) for donations. Donors must hit a "contribute" button to enter their credit card information. (Bernie Sanders could perhaps use some $Cashtag love after livetweeting the GOP debate in the pithiest, least "politicky" way we've ever seen.) 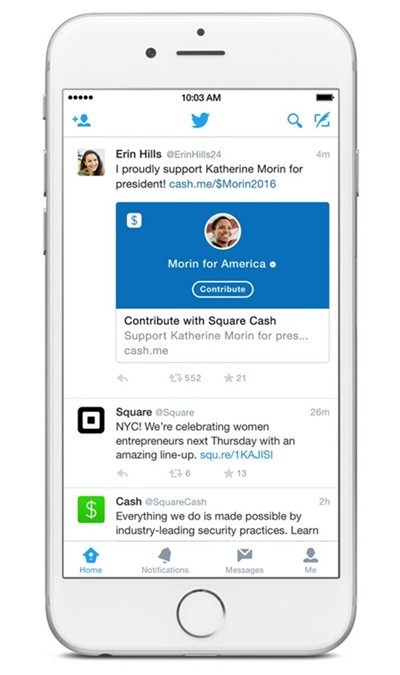 9. Google and Twitter team up for open-source 'Instant Articles'

Facebook's "Instant Articles" feature—which lets users click on a link and view an article instantly without waiting or leaving the platform—has made a huge splash. In response, Google and Twitter are working together to make their own version... in open source! That means any tech company that adopts their variant will be able to serve Instant Articles. The result: both broadened reach for publishers on mobile, and increased referral traffic from platforms, which can use those figures to attract advertisers.

To function, the Google/Twitter take on Instant Articles won't actually host content; it'll serve "cached" pages, or snapshots of a webpage. In a plus for advertisers, cached pages will also include the original ads that appeared beside the stories, effectively giving them a "second run" on mobile (and evading ad blockers).

Fans of gas station brands probably don't appear often, so ARCO went all out: With help from a famous comic book artist—and some pictures they found online of Garcia and his girlfriend—ARCO surprised him with a framed comic book cover of "ARCOMAN and the Red Spark," with Garcia, and his partner, featured as the title heroes. The effort resulted in the video below, where you can learn all about Garcia and see the surprise moment.

This is one example of what opportunities you can find when you monitor social networks and listen closely to what people are saying. Garcia, armed with a rich personal brand story, is now more or less guaranteed to be a brand advocate for life. And because of its interest in the man himself, ARCO's shown it's relatable and interested in others, which could compel other customers to feel the way Garcia does.