#SocialSkim: The Strongest Social Brand, Plus 12 More Stories in This Week's Roundup

Find out which is the strongest US social brand, how Google's helping users pick a costume this year, how Snapchat plans to improve video production offerings, and which content marketing horrors to avoid. Also: how Target won social points with a small Halloween promo.

Skim to stay in season!

Who's the fairest social brand of all?

The answer may surprise you: National Geographic, the 100-year-old magazine, is the US's leading social brand, per Shareablee's Top 25 Social US Brands in 2015. Once known for glossy magazine shots of rhinos in the untouched wild, NatGeo scored 482.5 million total interactions across Facebook, Twitter, and Instagram—462.1 million of which came from the latter, where it leads. Only 2% of its engagement comes from video, but that's probably because it's dominating an image-based sphere with, well, strong images.

Photograph by Michael Yamashita. @yamashitaphoto. #Squid are laid out to dry in the sun. #Danang #Vietnam @thephotosociety @natgeocreative

Buffer's Pablo, which lets you combine text and images for social posts, was updated to automatically generate—and share—images the perfect size for any socnet you fancy. Use "Tall & vertical" for Pinterest and Google+, "Short & horizontal" for Twitter and Facebook, and the square format for Instagram or LinkedIn. You can also…

SensorTower did the math and found that after Instagram opened its ad platform to all... game developers came to rule the roost. One in every 10 Instagram ads in October came from fantasy sports provider FanDuel. And, in general, game developers accounted for 27% of all Insta ads over that same period. Entertainment brands followed at 23%.

Check out the top 10 Instagram advertisers in the link above—and if you worry you're just not artsy enough for Insta, don't despair: Read this bit on why Honda basically uses Instagram to focus on sheet metal (because that's what its users like most). 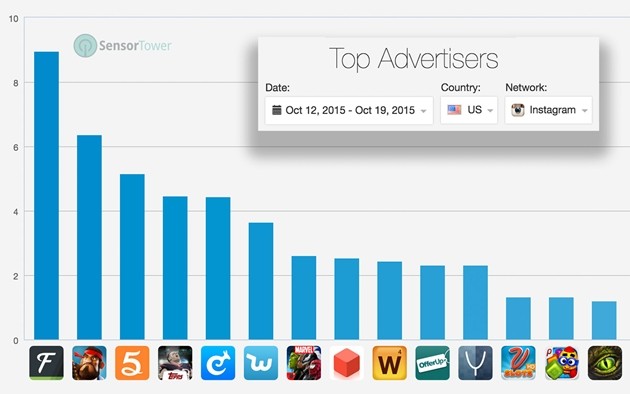 3. How Google is helping people avoid being costume clichés...

...by making use of its Trends data with Halloween-themed Freitgeist, which tells you which costume ideas are trending locally and nationally across the United States. The execution is handy for users—who can avoid popping up in Eureka, CA, dressed like yet another Poison Ivy clone—and businesses, which can use the data to build clever campaigns that play on what people are most likely to see at every costumed event preceding tomorrow night.

To wit: Harley Quinn is currently the most-searched costume idea in the country, followed by Star Wars. Do with that information what you will. And if you want more data for the season, learn which candy social users like best. 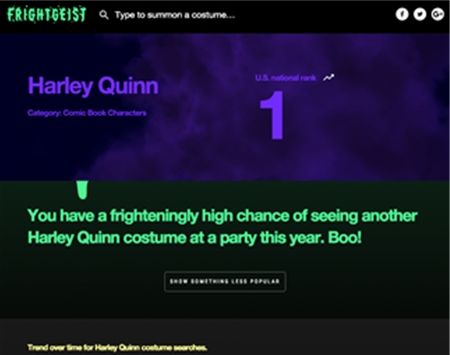 4. Speed up, slow down, or reverse your Snapchat video replays

Snapchat's newest filters let you do all of the above, making it easier to impress a Millennial audience. Find them by swiping right after creating a video. The slow motion feature is illustrated as a snail image, fast-forward is a rabbit, and reverse arrows mean rewind. 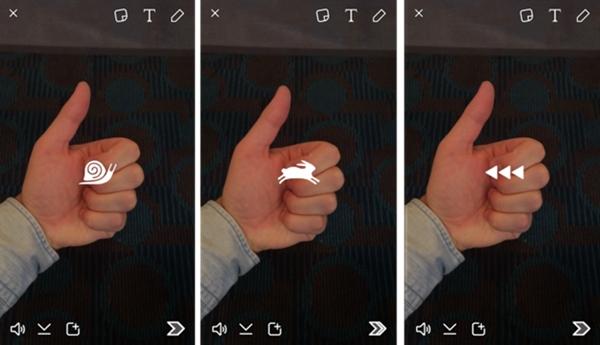 This addition makes it easier for brands to attract roving eyes—but, crucially, it gives you the chance to play with different ways to be entertaining on the platform, which has been tricky for marketers so far.

The force is strong with today's snap update https://t.co/utdW8tLr3P pic.twitter.com/8pRLAiuVCD

Twitter announced that Q4 revenue will be between $695 million and $710 million, way below analyst estimates of $740 million. Paired with its stagnating monthly active user count (316 million, up from 232 million in 2013), the picture isn't pretty, and analysts expressed "disappointment" about both the forecast and management's failure to explain why they're having so much trouble growing.

Newly reinstated CEO Jack Dorsey promises "bold" product changes over the next year that will affect Twitter, Periscope, and Vine.

6. But hey! Now you can follow more Tweeters you love

It's notoriously difficult to establish a solid Twitter presence, and many brands try boosting followers by using tools to follow huge numbers of relevant users at a time, hoping to score follow-backs. Until recently, people could follow only up to 2,000 users, after which further growth was restricted to about 10% of your following.

All that's changing, maybe in part because Twitter recognizes how frustrating this can be for brands at a time when it can't afford to alienate them. The follower ceiling has been raised to 5,000, even if you have no followers at all. Enjoy the freedom, but don't wild out! The following-to-followed ratio still matters to people checking your credibility. Here are more details and best-practices.

Starting today, we are increasing our current follow limit from 2,000 to 5,000 accounts for all users: https://t.co/Yxx66XESMf

7. 65% of adults now use social networks

That's a nearly tenfold jump in ten years, says the Pew Research Center. Other cool details: 90% of those between 18 and 29 use social media, making them the most common users, but senior use is rising: 35% of people over 65 use social, up from 2% in 2005. Education matters, too: People with a higher education level and household income are more likely to go social, but 56% of people in the lowest-income brackets are also social media users.

8. The thumb is in charge: Everything you need to harness mobile

Facebook's launched a super-detailed article, the first in a three-part series on the importance of mobile and how marketers should shift their strategies to match new, thumb-based habits. The article comes with a PDF you can download and use to evangelize the gospel to your peers.

To start with, m-commerce is finally going mainstream: By Q4, the number of people who make a purchase via mobile will rise 30%. Already, 56% of "omni-channel shoppers" say they've made a purchase on a mobile device.

In the case of Millennials, the shift is more dramatic: 57% of their shopping journeys contain a mobile action, and 61% expect to use their smartphones more in-store. That's just the tip of the iceberg! 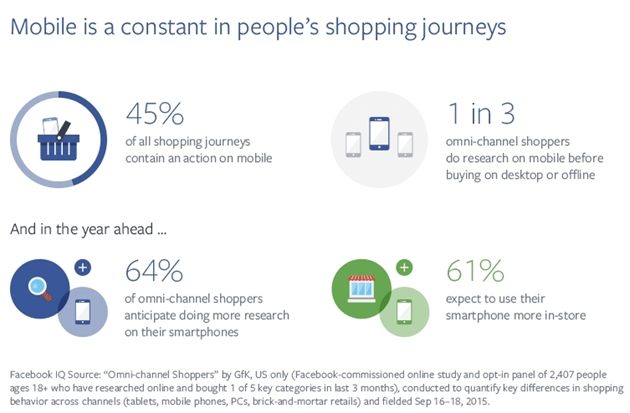 So glad you asked. The 'Book is quietly testing a Local Market feature that lets users buy and sell stuff à la Craigslist (but with prettier icons). Given its desire to move the platform toward more business transactions, this may make people more receptive to on-platform sales pitches from businesses, which will rise as Facebook's e-commerce platform grows more sophisticated. Watch this space. 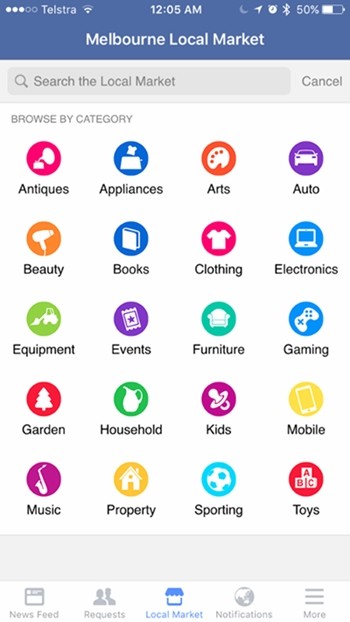 The platform went live on Wednesday and, YouTube permitting, we may soon learn the answer. Notably, it's paying creators during the free trial period, so hopes are high.

The platform costs $9.99 a month and lets you browse YouTube without ads, access original programs, save videos for offline viewing, play videos in the background on a mobile device, and access its Gaming app. That's a lot of love.

Question is, Even if the content's great and should be paid for, will people flip just like that for something that's been free for years?

Just in time for the spookiest holiday we know, Greg Verdino provides six content don'ts, each themed like a classic monster.

There's the Vampire: A parasitic content program that sucks the life out of your organization, budget, and resources! Kill it by putting quality above quantity. Find out whether you've got one of these, a zombie, a ghost, a werewolf, Frankenstein, or The Invisible Man (you can probably guess what that's all about).

And if you still need help, check out this infographic on walking the marketing tightrope, which will teach you how to make content that's both shareable and trustworthy. 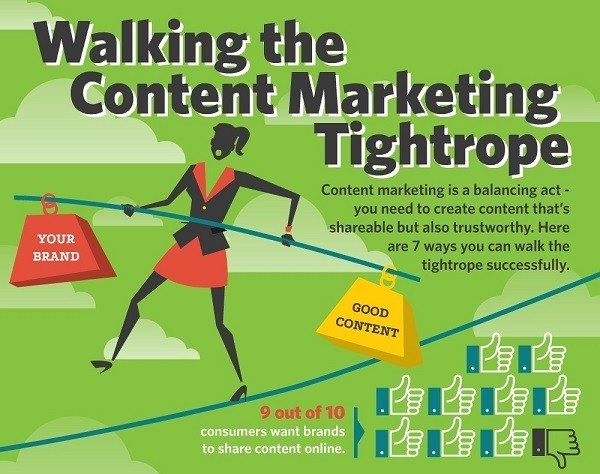 12. We'll wrap with something more touching than trick-or-treaty

Winning the social love vote this week is Target, which sent out a promotion of children's costumes that prominently featured a disabled girl dressed as Elsa from Frozen, which is probably still one of the most coveted kids' costumes of the season. One mother posted it on her Facebook, and the rest is social history...

Work like this illustrates the importance of demonstrating, even in quiet efforts, that you share the values of your users. No matter how much great content you produce, it's in such little moments that people find out what a brand is really about.

Shout out to #Target for including a child with a disability in their Halloween ad. #representationmatters pic.twitter.com/qrHBwYyy3b