This week's 'Skim highlights: LinkedIn steals headlines in its fight with the Kremlin; Twitter distances itself from... social media; Snapchat builds new, lead-generating ad capabilities; the ultimate LinkedIn cheat sheet for maximizing views; social's role in hot B2B trends; the latest on whether your YouTube ad investment is paying off; Mark Zuckerberg's potential dive into politics; and much more...

Skim for your weekly fix of social news, tips, and tricks!

1. Russia removed LinkedIn from its app stores, and Apple and Google complied

Users in Russia can no longer download LinkedIn on their smartphones, following a demand by the Russian government that Apple and Google remove the app from their app stores. LinkedIn has been accused of violating the nation's data storage law, which requires any company collecting data on Russian citizens store that data within the country's borders.

LinkedIn says its 6 million registered Russian users are the real losers, now left unable to grow their businesses using the platform. The data storage law has been in place since 2014, but LinkedIn is the first major social network to be blocked in Russia. Critics say the move is an attack on social networks by a government that's grown increasingly hostile to Internet freedoms.

Twitter is now the number one "news" app in the world. Ever since the ex-social network recategorized itself in app stores across all platforms, it's shot up in rankings as the company continues to reposition not as a place for people to stalk photos of friends but as one to see what's happening.

At CES 2017, Twitter's CMO said people were confused about what to do on the platform, and always felt pressure to tweet and constantly update. Now, the company says, those preoccupations of the past are not necessary.

But the app's reinvention and neutral stance has come at a price: stories of rampant cyberbullying and the platform's significant role in communication from the now President-Elect shaped opinions about it.

For better or for worse, Twitter will be there for all the news that fits into 140-characters in 2017.

3. How and why your brand should create a Facebook bot

Thought about putting the tools of Facebook Messenger to better use for your brand in this new year? Chatbots can be a great way to help answer your customers' frequently asked questions and free up more time to for your team to identify higher quality leads.

The social network now lets brands install chatbots on their business pages, which means it's easier than ever for a company to save time and respond to frivolous requests by constructing a set of menus or keywords that guide users.

The Social Media Examiner brings real-life examples to get your brand on the right path to building a bot, with a step-by-step guide covering conception to launch. 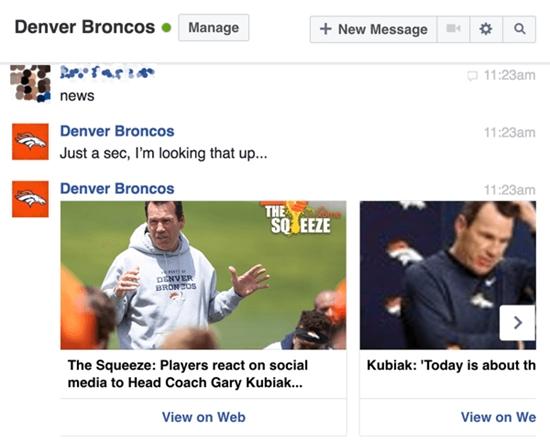 Snap Ads that are inserted between Stories or on Snapchat's Discover content just got a whole lot smarter. And they are starting to make the platform's ad business look a lot like Facebook's. By deep-linking, the new ad types allow advertisers to link users out of the Snapchat and straight into their own apps if users also have the advertiser's app downloaded.

A new auto-fill feature also lets advertisers easily collect information from users who choose to provide it; for example, a food delivery company can prompt users to sign up for its service by letting Snapchat give the company the contact information the user had previously opted to share.

The new ad tests could prove that engagement on Snapchat can move beyond the app itself, and that would be a good sign for both the platform and advertisers.

TechCrunch argues that it's time for the social giant to crack down on Facebook Live abuse, noting several alarming examples of both social-only pages and big-name publishing partners using the platform for non-live events.

They're doing so to take advantage of automatic notifications for users and Facebook's algorithm, which prioritizes Live over regular video posts. Five of the top ten Live videos in 2016 were things like countdown clocks, and big-name publishers like Unilad received more than 19 million views for an ostensible live stream... that was recorded in 2013.

Though Facebook encourages only live content to be broadcast, its rules leave the door open to previously recorded material, and that should be concerning to publishers and users alike. 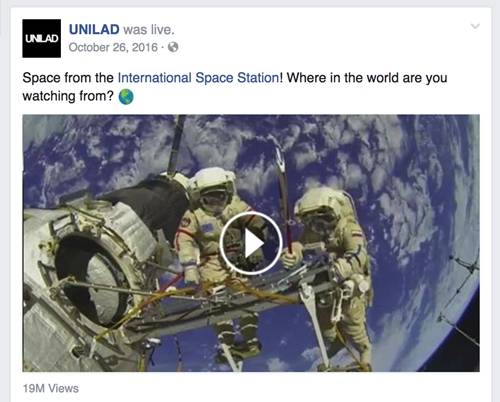 6. The ultimate LinkedIn cheat sheet to maximize your views

Only 51% of LinkedIn members have completed profiles, even though it's the primary factor the social network's algorithm uses to rank its search results. But optimizing your LinkedIn profiles goes well behind cropping a profile photo and getting recommendations from colleagues and clients.

Luckily, LeisureJobs has an infographic to ease all your greatest fears, and get you on the right track to maximizing views of your page, which could lead to more sales leads for you B2B marketers. Check out the full infographic on MarketingProfs. 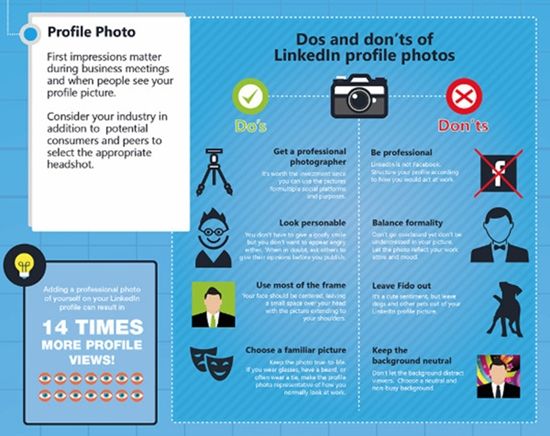 Out with the iTunes exclusives, and in with the Snapchat lenses. At least that's Ed Sheeran's approach at teasing his new single, "Shape of You." The Grammy-award winning British singer has partnered with Snapchat to create an augmented reality lens for users, who with the click of a button can turn themselves into sunglass-wearing clubgoers with a 30-second clip of Sheeran's latest single playing in the background.

The artist is using primarily social media to tease his new album across platforms, from publishing cryptic images on Twitter to sharing lyrics on Facebook. It also marks a new trend for Snapchat. Its foray into music shouldn't be ignored.

8. Snapchat or Instagram: Which is better for your business?

After Instagram's launch of Stories, it became apparent that Facebook plans to use Instagram as its Snapchat-killer, copying all the most popular features that differentiated Snapchat from the rest. But that doesn't mean that your business should call it quits on Snapchat.

Sure, Instagram boasts twice as many daily active users, but there are other, more important differences between the platforms that could determine which is the right fit for your business. From ease of use and the age breakdown of their users, to the pros and cons of specific features and how they can boost your business, dive in to see which is right for you. 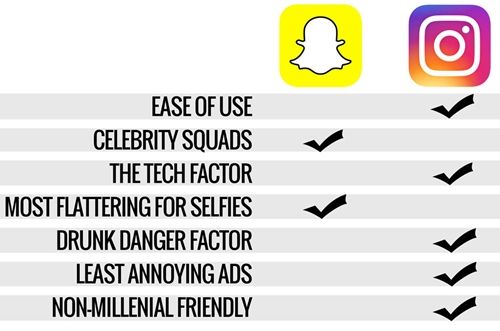 If you're using pre-roll ads on YouTube to spread your message, a recent survey from UBS Evidence Lab has some positive, or potentially saddening, insights, depending on how you view Millennials. The survey indicates that most (59%) of 18- 34-year-olds watch ads until they're able to skip them via YouTube's skip button, but a good portion (29%) still watch the ads all the way through.

Moreover, only 11% of American Millennials report using ad blockers to browse YouTube ad-free. Depending on what you've heard about the rise of ad blockers, those are potentially uplifting numbers that prove pre-roll isn't dead, but that also prove that producing more engaging content might be the only way to rise above the ad-blocking trend.

Oh, and in case you forgot, YouTube is still the third most popular social network among Millennials. 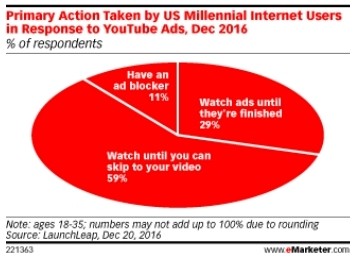 10. Facebook to begin testing mid-roll ads, and why that's good for users

Facebook is ready to test something publishers have been hoping for a while, and something the social network has, until now, opted to avoid: mid-roll video ads that insert an advertiser's video in the middle of video rather than at the beginning or end.

The new revenue stream will be split 55% to 45%, in the video producers' favor, and the ads will only display after at least 20 seconds of a minimum 90-second video has been watched. Since monetization requires longer watch times, the test of the ad format should encourage publishers to create longer, more engaging videos.

What do you think? Will Facebook's mid-roll ad unit be too distracting for users?

11. Social media to play a big role in 2017 hottest trends for B2Bs [infographic]

The top marketing tactic employed by B2B content marketers in 2017 will be social media as brands take a bold step to try to mimic the B2C industry's success in what's been a primary content marketing outlet for them. 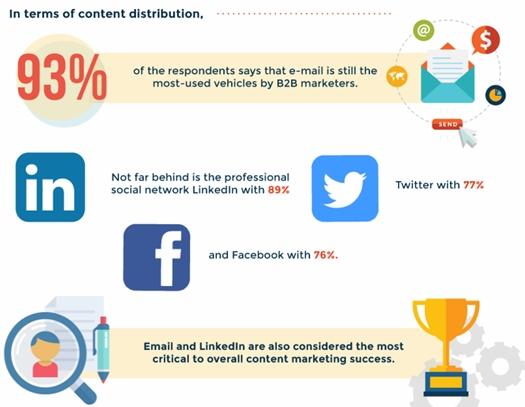 12. Could Mark Zuckerberg dive into politics?

Speculation is growing that Facebook's founder and CEO is gearing up for a political career, particularly with the declaration of his 2017 personal challenge to meet and listen to people in all 50 states.

Zuckerberg has already met with countless world leaders, from Barack Obama and the Presidents of Brazil and Mexico to the Prime Minister of India; and his big battle to maintain voting control of the company if he resigns or takes a leave of absence to work in government could be a strong indication of the CEO's plans. Sure, he might have to deal with people's disappointment with Facebook's fake news controversy, but that could be small fish for a grand political career.

For its latest campaign, Maybelline approached digital beauty influencers for the first time, and also happened to break the mold and select the first male ambassador in the company's history.

Manny Gutierrez, known to followers as Manny MUA, is an openly gay beauty influencer with massive followings across his social channels, and Maybelline stole the headlines this week when it announced he would be the face of their new campaign alongside fellow social media influencer Shayla Mitchell. Here's to breaking down barriers and changing opinions.