Also: a guide to content marketing best-practices on LinkedIn; measuring success on Snapchat; B2B leads via Facebook ads; and much more...

1. YouTube aims to kill cable with announcement of YouTubeTV

Google/Alphabet's YouTube on Tuesday took a big foray into television territory with the announcement of YouTubeTV, a new TV subscription service, set to launch in the next couple of months in the US. YouTubeTV looks to take advantage of Americans' increasing propensity to cutting the cable TV cord.

YouTube is offering unlimited access to a set of over 40 networks, including USA, FX, ESPN, Fox Sports, and more—starting at just $35 per month. Subscribers will be able to stream to various devices, including their televisions using Chromecast. In short, users will be able to tune into their favorite shows on their own terms, on their preferred device.

The TV space is getting more interesting by the minute as social giants test what approach works to their advantage in upending the traditional TV paradigm. Will you (have you?) cut the cord?

Adweek dives into the world of social media with in-depth looks at content marketing on the "four big platforms. Up this week: LinkedIn. If your company's content on LinkedIn can help users further their goals of building their personal brand, finding business prospects, or looking for jobs, you'll likely succeed.

From the basics of building functional content that creates value, to keys to creating mobile-optimized, sponsored content and pushing it via sophisticated targeting and InMail, LinkedIn can prove to be the most effective platform for building leads and product awareness. See how now.

3. All businesses can now run ads on Instagram Stories

Facebook-owned photo and video sharing social network Instagram has not held its punches to ensure its Snapchat Stories clone, Instagram Stories, succeeds. The company launched the Stories feature in August 2016 and announced in January that it was testing full-screen ads with 30 global brands; it's now ready to roll out the red carpet for all businesses.

All companies will be able to place ads between users' Stories in the next few weeks, with the primary key performance indicator being reach, which Instagram says the ad format is optimized for. Interested in finding out more? Click here to see how you can run ads on Instagram Stories.

The social network, looking to create new revenue streams, is expanding its trial of in-stream video ads beyond Facebook Live broadcasts, and creeping into the world of videos from publishers.

Facebook is testing the ads, which only appear after at least 20 seconds of a video has played, with a small number of US publishers, and letting them keep 55% of the ad revenue.

Mid-roll ads could also change how content creators produce videos for the platform: Brands might eventually need to build suspense in their video content to make sure it maintains viewers' interest through ad breaks. Challenge accepted.

5. It looks like Facebook's Reactions are finally catching on

It's been just over one year since the social network introduced alternatives to the "Like" button. They seemed slow to take off, but Facebook can now count over 300 billion reactions used on posts in the past year.

"Love" was the reaction most used, clocking in with over half of the total use of Reactions, and Mexico was the country that used Reactions most. The US stood at number eight, behind Greece, Chile, and Suriname, among others.

6. Periscope Producer now available to all

Streaming just got easier for all Periscope users, with the Twitter-owned company announcing the release of Periscope Producer for mobile and Web users—on iOS and Android.

The feature allows users to stream to Periscope from external devices other than phones and tablets. Users can now employ professional cameras, streaming software, or hardware encoders to share live broadcasts with the world.

Anyone can now broadcast with Periscope Producer - available on Android, iOS and web! ??????https://t.co/xwnkrVYdPy

7. How to measure your brand's success on Snapchat

We've often discussed why Snapchat could be a great platform for your brand, but Snapchat's insights leave much to be desired. That doesn't mean your company should be snapping away without some important benchmarks in mind, of course.

Recent data from Snapalytics provides key insights into how brands are performing on Snapchat, from how users are finding their accounts to how many snaps brands are adding to their stories on average per month. We've highlighted some of the most important takeaways here, but catch our coverage of the report for an in-depth look! 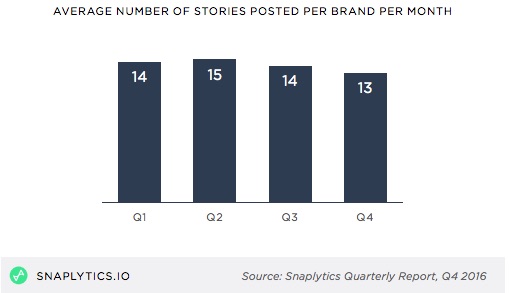 8. Why and how B2Bs must get more social

A new report from eMarketer suggests that although B2B brands are getting on board social media, they lack expertise. Brands need to do some more research via the insights available on social platforms to truly understand users' buyer behavior before executing social media campaigns, the report suggests.

Companies can perform social listening and data mining to get to the bottom of their audiences' behavior and ensure they're delivering their messages on the right platform at the optimal time. But B2B companies are hesitant to use social monitoring tools, with only 39% reporting they use them.

Unfortunately, companies that don't make analyzing their potential customers' usage habits, channel preferences, and consumption patterns will ultimately fail in their social media strategy a they're not aligned with the buyer journey. Take a listen below for more!

As much as social networks clearly want it to be, livestreaming might truly be the next big thing, so brands should experiment to see whether it makes sense for them. Before jumping in, however, we have some rock solid guidelines to make sure your company's first live broadcast doesn't go off the rails and instead generates real-time engagement that builds awareness and influences audiences.

Covered in detail: setting up a livestream "war room," establishing dedicated support for during and after the live event, preparing an easy-to-use CMS tool and possibly building in a slight delay, drafting and communicating set guidelines for your team, and more...

10. How B2B brands can generate leads via Facebook Ads

The success of ads depends on how well their content conforms to the media they're running on, and how well they serve the objectives of its users. Advertisement network Adlove has created an infographic dedicated to B2B-ers hoping to make a splash with their Facebook ads.

Covered in detail: promoting content to the target department, retargeting viewers with a hook, referral asking to get warm prospects, and qualifying and entering the sales cycle. Click through to discover all the great insights:

11. Campaign optimization: Which social platforms to use and when

Posting the "right" content on the wrong social network can lead to bad sentiment from users and headaches for brands, so matching the strengths and weaknesses of each platform with the goals and objectives of your company can go miles in optimizing your campaigns.

From which social network makes the most sense for nitty-gritty targeting or app-install campaigns, to which lends its hand best at shifting perceptions about products and which is imperative for influencer campaigns, MarketingProfs has a top-notch breakdown of which social platform you should be using and when.

The US Supreme Court could soon whip up a controversial debate that pits free speech rights on social media against a state's law pertaining to sex offenders. The Supreme Court last week suggested it might strike down a North Carolina law that makes it illegal for registered sex offenders to use social networks that allow minors to have accounts.

At least five justices on the Supreme Court cast doubt on the North Carolina law, saying that given the prevalence of social media today, offenders would be cut off from a crucial channel of communication and large marketplace of ideas, and that the First Amendment also includes the right to receive information. A final decision by the Court is expected in June.