In this week's 'Skim: Apple launches a Snapchat-inspired video editing app; LinkedIn announces big news for its Sales Navigator, adds new retargeting tools; Foursquare plots to take over the world; YouTube phases out annotations; Instagram has a surprising influence on older users; and much more...

Skim for this week's roundup!

Apple might not be ready to take a full leap into social media, but what it unveiled last week could be called baby steps. The technology giant introduced Clips, a new, social-media-inspired video, photo, and music editing app on iOS that shares quickly and easily across social networks.

Why social-media-inspired? Users will be able to add filters, speech bubbles, shapes, emoji, and even "full-screen posters with animated background and customizable text." Apple's also added what it calls "Live Titles," animated captions and titles based on what users say.

There will be a music library of tracks for users to choose to set their clips to, and the app will automatically suggest tags of people who are in your contacts or have been previously identified within your iOS Photos app. Clips will launch in April.

Finding leads on LinkedIn just got a bit easier for brands, with the social network announcing a new Enteprise Edition of its Sales Navigator, its lead-generation solution. The improvements include new customer relationship management integrations, with widgets for quick profile viewing shared within CRMs such as Salesforce and Microsoft Dynamics.

For companies already using the Professional or Team editions of Sales Navigator, a LinkedIn spokesperson described the new Enterprise Edition as one for high-functioning sales organizations, as it now includes up to 50 InMails per month and TeamLink Extend, which lets anyone in your company opt in to share his/her LinkedIn network with TeamLink so that all employees can reach out to one another for introductions to prospects, even if the employees are not directly connected.

3. Others are trying, but Facebook is dominating social video

Gary Vaynerchuk said its video feature is a brand's best friend, and now anew report from social analytics company Quintly shows that Facebook not only dominates video for marketing campaigns but also exemplifies the trend of siloed content's becoming a thing of the past as social networks continue to integrate features copied from one another.

Among the brands studied that use video in their Facebook campaigns, 90% used native Facebook videos, whereas just 30% and 2% used YouTube and Vimeo, respectively. Facebook native videos—those uploaded directly to the platform—also garnered 186% more engagement than other formats, and they were shared 4.6 times more than others. 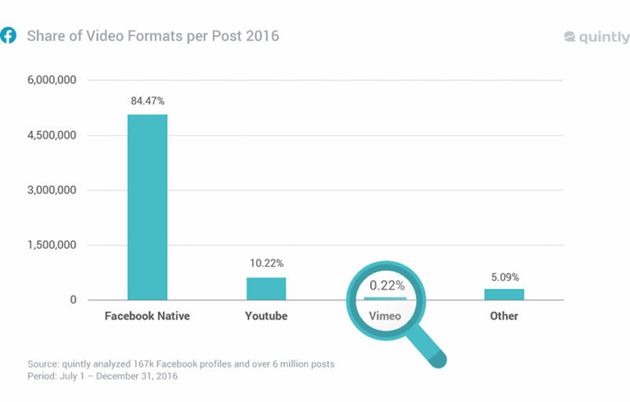 4. Foursquare is quietly plotting its takeover of the world

You might think of Foursquare as long gone from the social media space, but the company has other ideas. It recently announced Foursquare Analytics and, in the process, continued its transformation from a social media company to a location-data powerhouse.

Foursquare Analytics is essentially a dashboard of insights that lets companies see how they're performing based on measurable, real-world visits. With 50 million monthly users around the globe, and 92% of consumer spending still taking place in the physical world, Foursquare argues the real world lacks features like cookies that make digital work and the company's no-hardware-needed setup means brands can begin providing timely offers to consumers in new ways.

Although it won't be rolled out until November, we've got word of a new LinkedIn ad targeting program that will bring the professional social network more in step with other platforms' modern advertising businesses.

LinkedIn will bring back the ability for marketers to retarget consumers who have visited their websites with ads on LinkedIn, as well as let them target consumers based on email addresses. These techniques are already employed by rivals including Facebook, Google, Twitter, and Pinterest, and will be a part of LinkedIn's new "Matched Audiences" program.

It turns out Instagram ads could be a surprisingly effective way to influence the decision-makers in organizations who ultimately decide to buy, or subscribe to, your B2B products or services. A new report from Influence.co finds that users 65-74 and 45-54 are the most likely to search out products after seeing promoted posts on the platform.

Though Instagram has certainly become more of a pay-to-play playground for brands, that might not be a bad thing—if the ROI is worthwhile. 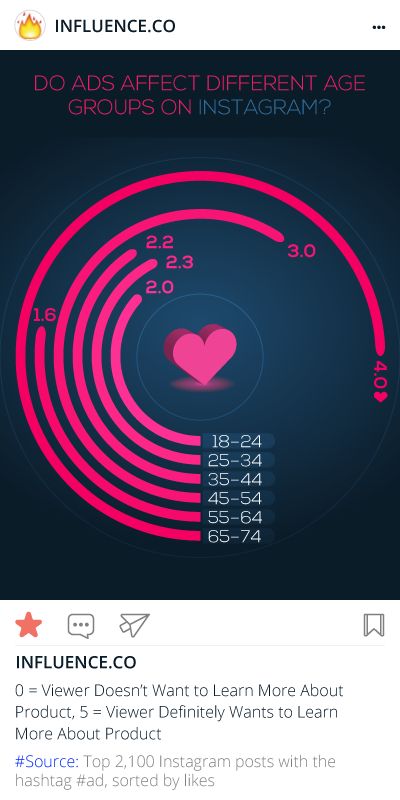 7. YouTube to phase out annotations, focus on mobile-friendly features

You might use YouTube as a part of your social media strategy to better showcase your products and all they can do, but maybe you're using the platform less effectively than you could. The Google-owned social video network is phasing out one of its oldest features, annotations, in favor of newer, mobile-first capabilities including end screens and cards.

Annotations let users place pop-up calls-to-action on the screen on a video, while cards place a discreet "information" symbol at the top right corner of videos that encourages users to click through to relevant websites. End screens are placed at the end of a video, and include several types of clickable overlay images that users can select to either visit a website, subscribe to the channel, or view another video.

Do you already use end screens and cards? If not, check out the video to see how to get started!

8. How much you can expect to pay for Instagram influencers

Influencers charge $271, on average, to share sponsored content on the platform and, while that cost varies significantly according to industry, it also is strongly correlated to audience size.

Have you thought about seeking out influencers in your field as a part of your social media strategy? A recent report from Influence.co and a great recap from MarketingProfs dives into what you can expect to pay, whether a male or female influencer will cost you more, the average number of followers you can expect your targeted influencers to have based on niche, and much more. 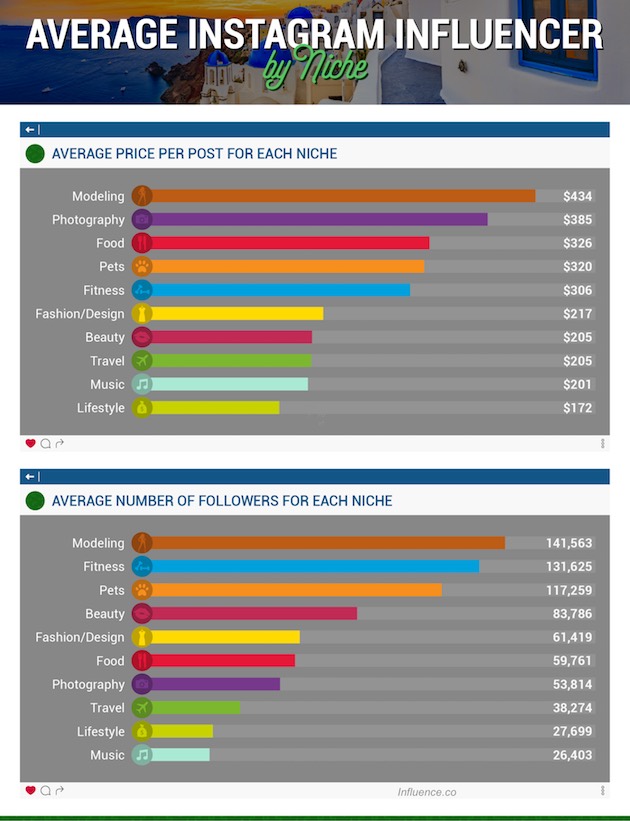 Facebook began letting Android users spruce up text-only posts with background colors and larger text back in December, and now it appears the same feature is slowly rolling out to iOS users.

The capability lets users select a custom background color to place their text against in order to make the post more visual and engaging. If brands ever need to publish something without a video, GIF, or other visual to go along with it, they should certainly take note of this new way to enhance what might otherwise be a boring, uninspiring post. 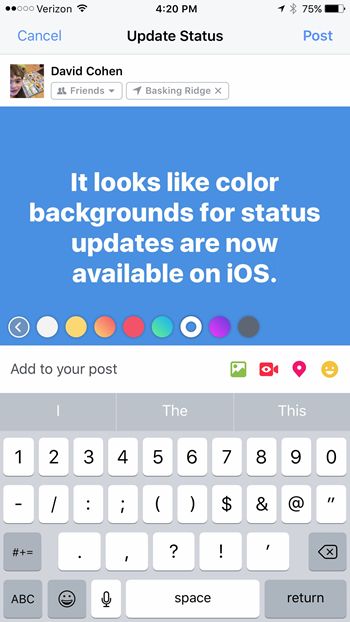 It might be the greatest success story to come out of social media's rush to video, but also one that your brand's never even considered as an opportunity. We introduced you to Musical.ly, which lets users set their own videos to their favorite songs, back last May. As a reminder, the app's highly engaged users spend an average of 13 minutes per day on the platform!

Worth noting is that Musical.ly, which now claims 40 million monthly active users, continues to innovate and launch new capabilities, like its latest duet feature. Moreover, the app's user base has grown older: Whereas at the beginning of 2016 90% of the app's user base was in the 13-24 demo, by September that number had fallen to 60%. In other words, the door is opening wider and wider to brand opportunities. Keep an eye on this one, folks.

The fight against fake news and online hate speech escalated dramatically last week, when the German parliament drafted legislation that could result in fines for the likes of Facebook and Twitter—up to €50 million—if they don't remove blatantly illegal content within 24 hours. That could lead one to believe that the timing of news that Twitter suspended over 600,000 accounts accused of promoting terrorism in just the second half of 2016 alone wasn't a coincidence.

The German parliament suggests that social media companies have long failed to address the problems of fake news and hate speech that live on their networks, but free speech advocates in the country are expected to push back against the new law. The German government's move comes after Chancellor Angela Merkel raised concerns that fake news and bots could influence upcoming elections.