In this week's 'Skim: Facebook looks to give parents more control with new teen messaging app; Instagram seems to win out over Snapchat for small business needs; Facebook, WhatsApp revamp photo features, filters, and albums; the only social listening tool that can dive into Reddit; why Facebook's mid-roll video ads are underwhelming; top social media trends for B2B; and much more...

Skim for your breakdown of all the latest social media news!

Website The Information reveals that Facebook is working to develop a messaging app that will enable parents to monitor who their children are in contact with.

Based on code discovered on the flagship Facebook app, the new messaging platform—dubbed Talk—will allow parents to "fully control the contacts your child uses the Talk app to chat with you in Messenger." No official word from Facebook yet, but the app is expected to let users even without Facebook profiles sign up.

2. Small businesses look to Instagram more than Snapchat for services... by a mile

It would be easy to assume, at first glance, that Instagram's progressive growth at the expense of Snapchat is due to its copying of core Snapchat user experiences, like Stories. But a deeper look reveals the navigability and advertising problem that plagues Snapchat's future.

If Snapchat aims to change this situation, it must continue to release new ad units that can attract business of all sizes. Even so, the social network is certainly fighting an uphill battle.

Facebook Albums just got a major overhaul, with new features launching on Android and Web—with iOS soon to come. Users will be able to add videos, check-ins, and text posts to albums; showcase their favorite albums on their profiles; share and create albums with friends; and easily follow friends' albums by signing up for notifications.

As Facebook continues to aim for more authentic sharing, it seems to be encouraging users to engage in a more visual form of storytelling, and its new albums update might just be the start. 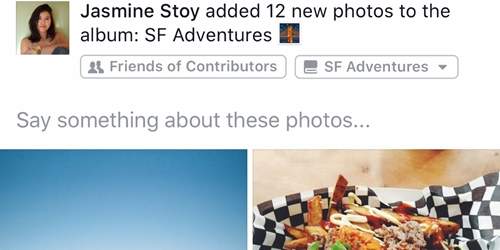 WhatsApp users on iOS were treated to a surprise trio of new features this week as the Facebook-owned messaging app got even more visual. WhatsApp added filters for all types of media, the ability to group photos into neatly organized albums, and a new form of reply shortcuts to cut down on inefficiencies.

Five new photo, video, and GIF filters give users a way to brighten up or give effect to their media before sending to a friend, and users who send four or more photos or videos will see their media automatically arranged into an album with a tile layout

The new reply shortcut means users can swipe on a specific message in a thread to reply directly to that content—a time-saving feature for people whose late responses often get buried in a busy group chat. There's no specified timeline for an Android release of the same features.

Listening to what your followers, critics, and best customers are saying about your brand on social can go miles toward not only helping your team optimize your social media strategy but also furthering your business objectives. You might use tools like Hootsuite or Buffer to keep tabs on conversations around your brand on Facebook and Twitter, but tapping into the more complex social network Reddit—filled with thousands of passionate, niche communities—has remained a mystery for most marketers.

Now, there's finally a social listening and analytics tool that can crunch the Reddit data and gather insights for your brand. Brandwatch now provides its users with Reddit data at no extra cost and, for the right brand, that could go far in mining into the deeper feedback Redditors are seemingly more apt to provide.

Snap Inc.'s Spectacles are about to make a bigger splash than we think even the company predicted, with sales of the connected sunglasses rolling out across Europe online and via pop-up Spectacles selling bots in high-profile locations in major cities.

Snap will begin its European promotional tour with vending machines in London, Berlin, Paris, Venice, and Barcelona; it will announce upcoming locations 24 hours prior to launch. We'll wait to see whether our neighbors across the pond are as keen on Spectacles. 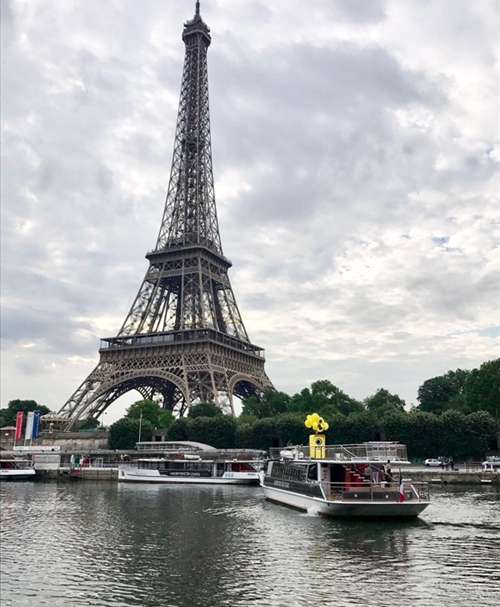 Google's YouTube is taking new steps to ensure that hateful content doesn't fill users' search results, and that those who publish such content don't reap rewards from having done so.

The video-sharing social network took steps to disable advertising for users who post videos that constitute hateful content, the inappropriate use of family entertainment characters, or incendiary or demeaning content. YouTube did note, however, that the standards for what content is eligible for advertising on the platform remain different from what is eligible to remain present on it, meaning some objectionable content might not be rewarded, but could stay visible.

8. Facebook's mid-roll video ads are apparently nothing to write home about

Three months after the ads' rollout, publishers of videos on the social network are finally starting to see some results in the form of ad revenue from the testing of Facebook mid-roll video ads. But there's a catch: The ads are working only about as well as the social network's Suggested Video ads, which appear between two recommended videos.

Publishers noted, however, that even though it requires fewer views on YouTube to generate the same amount of revenue that they generate via Facebook mid-roll ads, Facebook provides a level of volume and scale that YouTube cannot match.

But how will Facebook users feel about being interrupted mid-video? That will be the true test, and the jury is still out.

9. Snapchat wants to prove its advertising can generate foot traffic

Snapchat acquired location-based analytics and ad measurement startup, Placed, in an effort to show advertisers how the platform's ad services like Snap to Store can translate to offline return on investment for brands.

Placed has developed an audience it can ask about recent location and store visits, and by combining that information with third party data, the startup—and now Snapchat—can figure out what percentage of a sample of an ad's viewers were encouraged to visit a store.

The acquisition should give Snap and its advertisers deeper insights into ad effectiveness, and help the social network close the gap a little between what marketers believe it can offer and what competitors like Facebook can offer.

Recent research on B2B and B2C marketers from Social Media Examiner finds that for the first time ever in the history of the study Facebook surpassed LinkedIn in terms of importance for B2B marketers.

But a significant portion of B2B-ers still rate LinkedIn as integral to their marketing activities, with 37% citing it as their most important social media platform. But, aside from Facebook, which social platform comes out ahead of LinkedIn as the most used paid channel? Check out the recap for the most important findings! 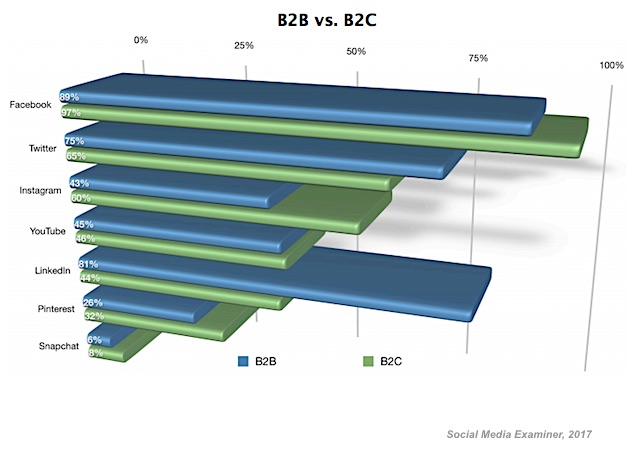 Welcome to Facebook's newly christened political world. The social network has rolled out new ways for elected officials to get in touch with their constituents via what it calls constituent badges, constituent insights, and district targeting.

The new tools allow users to identify themselves as constituents of a certain elected official's district, and let those in office gather insights about what news stories and trending topics are most talked about in their districts.

District targeting—perhaps the most important addition—lets politicians set up polls or questions that will be shown only to their constituents on the platform, allowing them to use Facebook to gather feedback about their opinions on various topics and policy issues.