Any iPhone users with Apple's new iOS 11 software update will be able to start chats with businesses they discover via Siri, Maps, Safari, and Spotlight search—a direct shot at messaging apps like Facebook's Messenger that encourage users to chat with bots.

With Business Chat, iPhone users will be able to schedule appointments, make inquiries, make purchases, etc. and businesses will even be able to encourage users to download standalone apps should customers' requests not be able to be handled via text. 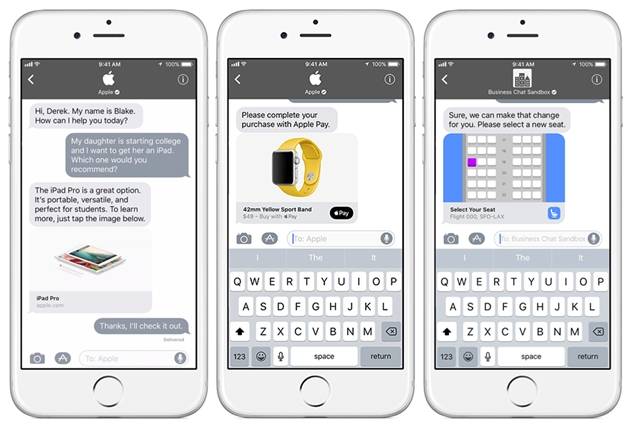 Twitter, out of the blue, on Thursday released a major redesign of its mobile app, which not only tweaks the typography but also brings a more streamlined look between the social network's iOS and Android apps.

Profiles are now accessible via a new side navigation bar, which also houses Moments and settings, and can be found by clicking on your profile photo or the top of your timeline. There are more rounded icons, and generally more white space in and around all elements.

The new design is set to roll out to all in the coming days—if it hasn't already reached your screen.

Marissa Mayer's Yahoo acquired social network Tumblr in 2013 for $1.1 billion, and now it seems what was once supposed to become Yahoo's shining gem in the social space can be written off as a loss.

Yahoo never cracked the code for turning Tumblr's massive user base into ad dollars as a consequence of little ad product innovation (e.g., to the extent of Snapchat or Instagram), argues DigiDay.

Sources, who cite a drastic difference in company cultures, also partly blame an exodus of Tumblr's sales team once it was merged with Yahoo's, as well as the fact that Yahoo's Tumblr has a clumsy programmatic native ad network that targeted irrelevant ads at even more irrelevant consumers.

Tumblr seemed to be a shot in the dark for Yahoo, and now—as Yahoo prepares to be swallowed up by Verizon—we think we know just how dark that room turned out to be.

The social giant is reportedly building a way for users to pay for news publication subscriptions directly on its mobile app, and that feature should be rolled out by the end of 2017.

Details are scarce for now, but indications are that the feature will be applicable only to articles published natively on Facebook via Instant Articles. Rumors also show the subscription model as metered-payment, meaning users will likely be able to read a limited number of articles for free before being prompted to purchase a subscription.

The move could significantly help publishers by giving them another opportunity to earn money from content on the social network—particularly local and regional publishers, which have faced more difficulty in today's digital world.

Twitter is trying to find ways to engage users with new content, and to do so it's testing a new feature, dubbed "Happening Now," which displays a small carousel of Twitter cards, each representing a different current event or conversation, at the top of timelines.

Users who select a card are rerouted to a stream of tweets related directly to that subject. This obvious display of new content could help Twitter users more easily discover new subjects and scan more tweets, something that many users might not even know they can do unless they venture down onto the "Explore" tab at the bottom of the mobile app. 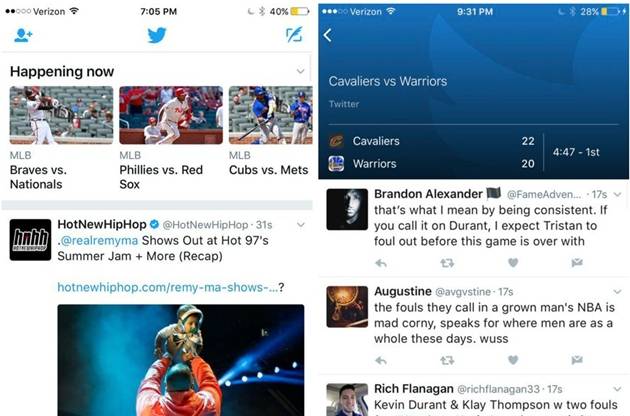 Building on pressure from government regulators, Facebook's Instagram wants influencers and celebrities to start labeling the posts for which they're paid. A new feature, which easily allow influencers to identify the brands with which they've entered into a paid partnership, will also enable the business to access insights on the performance of posts.

The new tool will be initially rolled out to a select number of creators and businesses, with a wider rollout slated for the coming months.

What do you think of the new labels? Check out the image below and let us know in the comments! 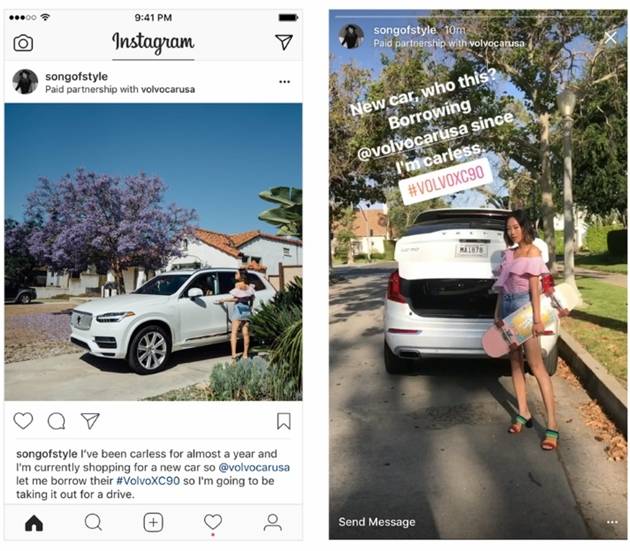 In case that old school photo just didn't do your Facebook profile justice, you might soon be able to express your brand or personal page with a cover video instead. Some users have reported seeing the video option this week, a sign that the social network might be expanding testing since the feature first reared its head back in April on Netflix's page for its show "Narcos."

Cover videos must be between 20 and 90 seconds in length, the recommended video crop size is roughly the same as cover photos at 828 pixels by 462 pixels, and the videos auto-play and auto-loop once users load a Facebook page. It seems cover videos will start without sound, and users have the option to enable audio by selecting an unmute button on the bottom right.

8. Snapchat practices the art of seduction, for advertisers

Snapchat seems to have realized that it needs to step up its game if it wants to compete with the business-friendliness of Facebook's ad platforms. Cue the Snap Publisher tool, and a Snapchat Certified Partners program, both new additions to Snapchat's ad platform arsenal, and meant to make it easier for brands to advertise on the social network.

Moreover, Snapchat is also officially rolling out its self-serve Ad Manager. The idea is to make it easier for brands to handle their own campaigns from start to end, with limited hiccups. And Snapchat needs to do just that if it wants to remain relevant. 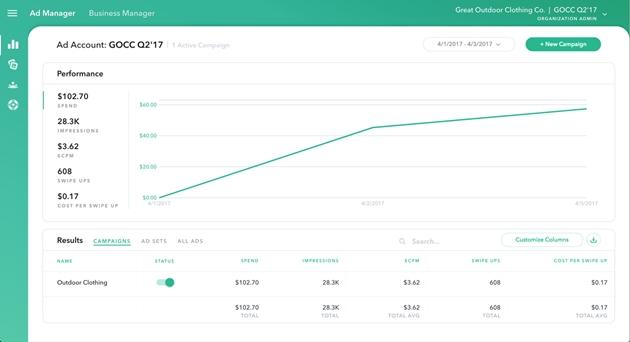 Users can now move photos and video posts they're hesitant about keeping up, or posts they were embarrassed about because they generated few likes, into a dedicated space only they can see.

Instagram officially rolled out the new Archive feature to all users last week; it can be accessed by selecting the three dots at the top right of each individual post. Instagram users can also reinstate the posts they've archived, should they change their minds about whether the content is worthy of their feed. They know you're picky.

10. Why social media is the best thing to happen to marketing automation

There's a reason 84% of CEOs and VPs use social media data to make purchasing decisions, and so it's obvious that such valuable data should play a part in what your marketing automation platform digests. Whether your brand uses Eloqua, Act-On, Pardot, Marketo, or another automation system, social media can play a valuable role in helping deliver increased customer engagement and conversions.

From the finding that 55% of B2B buyers search for information on social media, to the fact that social media can assist your brand in lead nurturing and attribution, MarketingProfs' recap of Oktopost's handy infographic on social and automation will keep you informed. 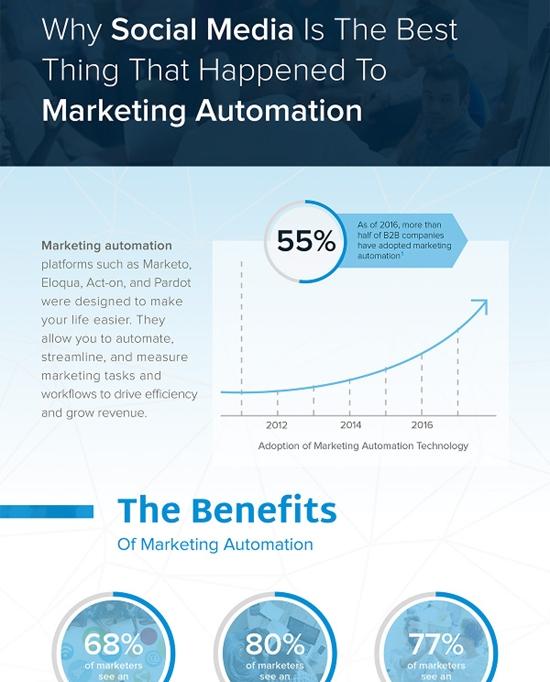 Aid organizations, including UNICEF, International Red Cross, and others, will soon get a new hand from Facebook in the form of data that could help them figure out where supplies or shelters might be required.

The social network is set to provide anonymized data from users in the form of "disaster maps" that will help organizations see how the population is distributed—based on where users are marking themselves safe via Safety Check or from where they might be fleeing.

Facebook will likely use three types of data to accomplish this: sourced from GPS indicators, location density maps that provide rough estimations of where people are, and movement maps that show how users have changed locations.

Skeptics are wondering whether the social network has any other uses in mind for this type of data, and who has access to it, but Facebook has no formal obligation to detail that. We can just hope it's up to some good.