In this week's 'Skim: Snapchat courts college audiences with new Publisher Stories; Facebook tests a platonic Tinder-like feature to get friends to meet up in real life, plans to spend $1B on original programming for "Watch"; Twitter's account-sharing feature that'll please your social media team; all about LinkedIn ProFinder; Facebook's ad format for print catalog publishers; how to get social engagement when your brand is boring; Apple partners with Snap for augmented reality; and much more...

Skim to see how social's shifted this week!

Struggling university newspapers have a new source of revenue on the horizon. That's right, Snapchat is courting college publications to create weekly Snapchat versions of their publications, taking advantage of the fact that the proportion of young people accessing news on the social network increased from 17% to 29% in just the past year.

The digital newspapers, made by students, will contain ads and will be housed in the Snapchat Discover section alongside major publications, like The New York Times and Buzzfeed. The Snapchat papers will be geo-restricted to a school's campus, and the schools will receive a share of ad revenue.

Facebook wants you to meet up with your friends in real life, and the social network seems keen to take a stab at a sort of Tinder for friends with a new test it's performing with some users in New Zealand and Canada.

Users spotted a prompt with pictures of a Facebook friend accompanied by text asking whether they want to meet up with them. Responses are private, unless both the asker and respondent say yes. The social giant is also testing notifications to entice users to join in on the fun, with one user receiving a note that 15 others "may want to meet up with [him] this week."

Whether this is a limited feature that will never see the light of day... we'll have to wait and see. Eagerly. 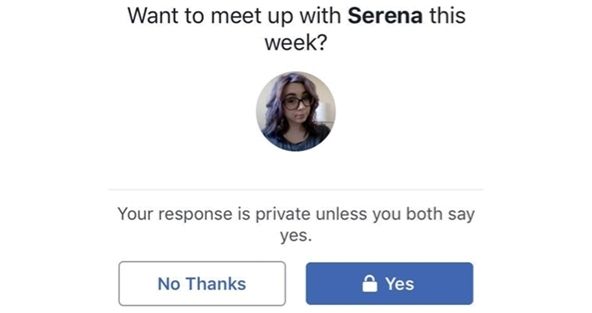 As the 'Skim covered last week, Facebook launched its new platform for original video content from publishers for American users last week, and indications are the social network is set to invest heavily to build a strategy that could rival Netflix.

Facebook is reportedly prepared to spend upwards of $1 billion on producing original shows through 2018, news that follows Apple's recent announcement to do the same. But Facebook joins Amazon in the ring as well, and for now there's no clear answer on who will come out on top, or whether multiple players can coexist in this space.

Ever had a public relations crisis and needed to get your messaging out quickly and concisely? Twitter, with each post limited to 140 characters, has never been the best place for that. But that all might change should a feature apparently built by the social network itself see success.

Twitter has reportedly designed a tweetstorm feature that would allow users to draft out a series of tweets all at once and then send them all out together.

The ability to create such a string of tweets isn't live in Twitter' app just yet, and it might never truly come to fruition, but it would be a long-awaited feature considering that the existing, manual way to create such messaging is anything but efficient.

We've got big news if your brand is a print-heavy one: Your world just got more social. Facebook's Collections ad format, which debuted in March, got a new creative addition this week to help retailers that traditionally depend on print catalogs to drive sales.

The new lifestyle templates are a creative format aimed to translate the richness of print catalog creative to smartphone screens, with brands being able to tag products directly in their creative to assist with product discovery, and guide viewers to physical stores with store locator cards.

Facebook tested lifestyle templates with retailers including J. Crew and West Elm, and the new ad unit should be available globally in October.

FBCollectionsAdWestElm from SocialTimes on Vimeo.

This new integration should make it loads easier for your social media marketing team to keep an eye on conversation around your brand, as well as assist customers.

Using Teams for shared accounts? You can now contribute to Teams on Android & iOS – so it's easy to Tweet on the go. https://t.co/qJKcibDZxj

You probably heard that Apple announced its suite of new iPhones this week. And though the new phones don't necessarily include any big, new social media functionalities to discuss, Snapchat still managed to get an unexpected shout-out during Apple's big event.

Apple briefly mentioned that it's working with Snap Inc. to develop hyper-realistic, face-tracking augmented reality filters. In fact, the social network has already been using the iPhone X's advanced AR features and Apple's developer kit to build more impressive Lenses. Investors loved the news so much that Snap Inc.'s shares ticked up 2% following the announcement.

You might not have heard of it, but LinkedIn has a freelancer marketplace that's grown leaps and bounds since its introduction in the U.S. market just over a year ago. Since the launch of LinkedIn ProFinder, the professional social network has garnered over 70,000 freelance professionals, with healthcare, software, and retail the most notable industries represented.

Weekly requests for proposals on ProFinder have increased fivefold since last year, and nearly 20% of its users expect to make six figures or more this year.

"Having watched the number of freelancers on LinkedIn grow by nearly 50% in just five years we knew creating this marketplace was imperative for this unique sector of the workforce," LinkedIn explained:

Interested in what LinkedIn ProFinder has to offer? Check out more of the stats.

American users saw a new Facebook feature that enables them to look up which movies are playing nearby, find available show times, and purchase tickets, all within the Facebook platform itself.

Users can now go to a single destination to find tickets for any film playing nearby, rather than having to navigate to a specific film's Facebook page to so do. Fandango's interest in all this? It's ability to connect groups of friends who could go see films together.

Facebook seems to be taking a bite of just about every industry these days. 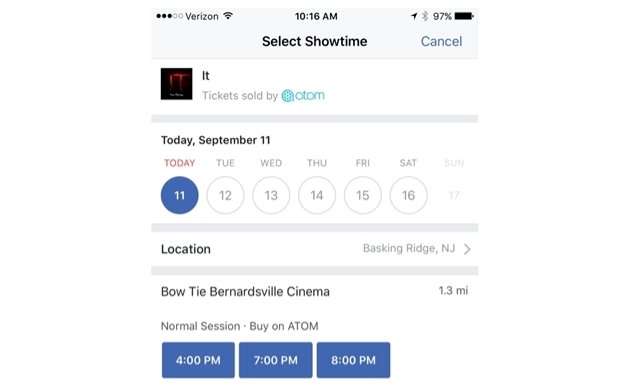 10. How to get more engagement on social media even when your brand is boring

Are you a B2B brand struggling to make your messaging interesting enough to catch consumers' attention? Marketers rarely have an opportunity to alter their product or service itself to make it more sexy, so changing the conversation on social media is a must if you want to build engagement and construct a community.

Business2Community offers some tips to make your boring brand exciting again, from a strategy of building content people care about and cranking up your efforts to personally communicate with fans, to mixing up your Facebook cover photos and publishing funny (but relevant and appropriate) memes.

Check out the ways to take your brand from zero to hero!

11. We'll wrap with the astounding two-thirds of Americans that get their news from social media

67% of American adults get at least some of their news via social media channels such as Facebook, YouTube, Snapchat, and Twitter. The Pew Research Center's new data shows that's a 5% increase from 2016, highlighting a continuing trend of social platforms' playing host to new publishing organizations.

Facebook, little surprise, takes the top spot with 45% of all Americans saying they get news on the social network, with YouTube and Twitter topping up the top three, with 18% and 11%, respectively. Twitter's gains were the most since last year, with 15% more users heading to the platform for news than the year prior.

All this prompts the question of whether social media platforms are taking fake news seriously enough, and what the social giants can do to make sure the social space remains a reputable one. 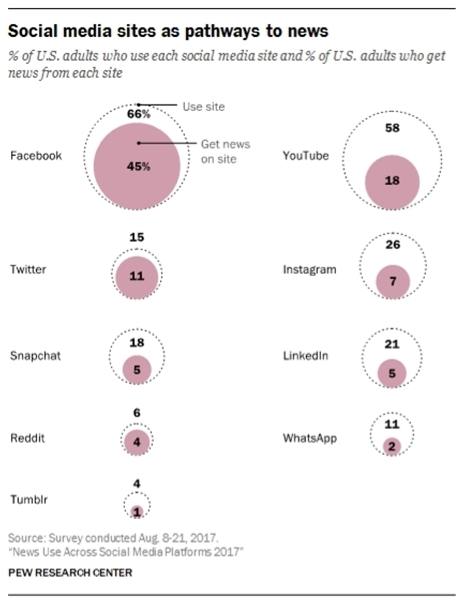