This week: Snapchat's feature that will transform how people use the app and how businesses will be discovered; LinkedIn's upgrade of its Sales Navigator, and what it means for marketing and sales; which social network just surpassed Netflix for online video viewing; Twitter's new bookmarking feature to help users stay organized; how and why to use two-person Instagram Live Stories; Taylor Swift to launch her own social app; how social media could improve teenager self-esteem; more...

1. Snapchat's Context Cards will transform the way people use the app

Snapchat introduced Context Cards, a new feature that enables users to swipe up on Stories and Snaps with its generic venue-specific geofilters to retrieve detailed information about a specific location—whether a restaurant, bar, hotel, or county fair.

Context Cards populate relevant stuff that users want to see, like reviews, comments, directions, contact information, and more from Snap partners TripAdvisor, Foursquare, Michelin, and OpenTable, among others. Oh, and users will also be able to hail an Uber or Lyft with a few clicks to get to that spot.

It's a brave new world for Snapchat to explore, blending the added value that apps like TripAdvisor and Google Maps provide, with the word-of-mouth and implied recommendations provided by users' most important digital reference group: their Snapchat friends.

LinkedIn's research shows that marketing and sales teams don't work as hand-in-hand as we'd like, meaning marketers' ability to precisely target the leads the salespeople are working on is less than ideal.

Fear not: the professional social network will now integrate its Sales Navigator platform, used by sales teams to track leads with its Campaign Manager so marketers can more effectively target and advertise to the leads their colleagues are pursuing.

Marketers will still control creative and budget, but they'll also now be able to market directly to the companies their sales reps have pegged as leads, and the sales team will be able to get important insights into how prospects are interacting with marketing campaigns. 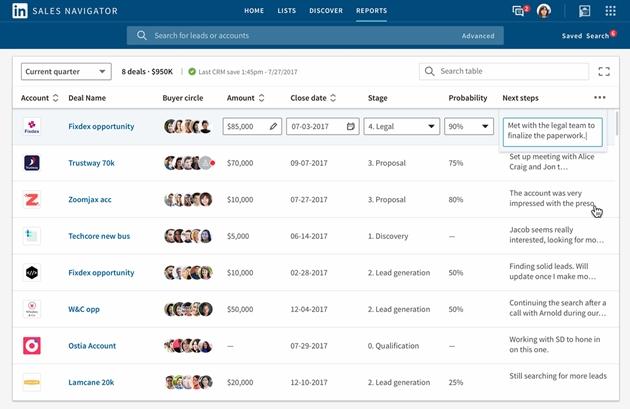 YouTube might still be the most watched video service in the world by a very wide margin, but Facebook just clawed passed Netflix to take the number two spot.

A recent study from Ampere Analysis shows that although YouTube boasts double Facebook's number of eyeballs watching video, Zuckerberg's social network video content is being watched at least once per month by 32.8% of Internet users in the study.

Facebook's Instagram also made a surprise visit to the top 10 with 15.9% of Internet users watching videos on the platform—coming in at number four, just behind Netflix.

Netflix users might certainly be more highly involved in the service than Facebook users in theirs, and watch for longer, but the study shows that Facebook is becoming a major player in online video—and marketers must prepare.

4. What marketers need to know about two-person Instagram live video

Instagram is in the process of rolling out the ability for users to bring a second guest into their Instagram Live Stories, meaning you have a new platform to show off your products or services with live Q&A sessions with experts, livestreams with influencers, interviews, customer testimonials, and much more.

The new feature could help brands get more personal with their followers and communicate in a more familiar, less salesy manner than traditional marketing tactics. But just how exactly can your company plan effectively for a two-person live video on Instagram, and what steps are important to take prior to pressing "go live"? Social Media Examiner's got the answers. 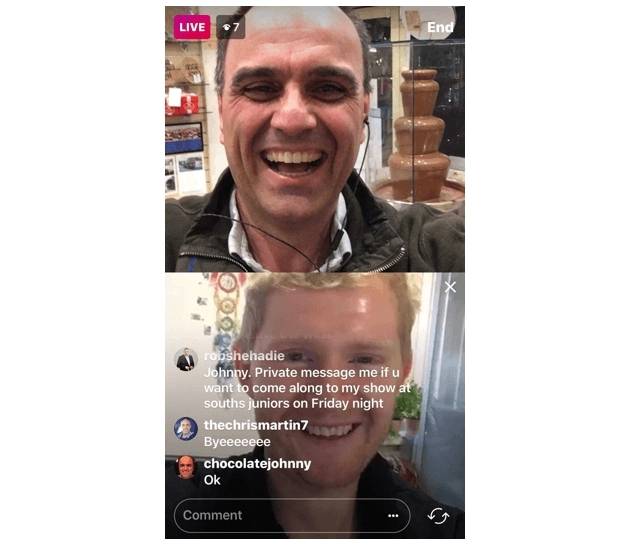 The social network plans to release an app called "Venues" next year that will let users with augmented reality gear watch live concerts, attend movie premieres, and view live sports matches, "all around the world with friends" and others.

The app, produced by Facebook's own Oculus system, could spell trouble for third-party AR apps like FoxVR, since the Facebook-produced app might be given preferential treatment in the Oculus ecosystem.

Facebook's proclaimed goal is to get 1 billion people involved in AR next year. Why leave the comfort of your own home?

6. Twitter's new bookmarking feature sure to please the masses

Ever come across an article tweeted by a crazy that you want to save to read later out of pure curiosity, but been hesitant to favorite it with Twitter's heart symbol in fear that your followers think you agree with it? Soon you won't have to.

Twitter is developing a bookmarking feature, for now dubbed Save for Later, that will let users create a separate list of items they want to refer to in the future. Such a bookmarking feature, already launched on Facebook years ago, has been frequently requested by Twitter users, and it appears the social network is willing to give fans what they're asking for. Now if only it could turn around Twitter's seemingly endless bad luck.

?????Fresh out of HackWeek and coming soon—a new way to save tweets to read later. Been a top request (??????!) The team would love your feedback as they dial in the design! #SaveForLater ?? https://t.co/6oo2lhqFbW

7. Messenger could lose out to Snapchat and Instagram by 2021

eMarketer has revised its growth expectations downward by 9.4 million users for Facebook's Messenger after a study's latest figures showed more robust engagement among teens on Snapchat and Instagram.

That's not to say Messenger won't still dominate the chat market, but it could suggest Messenger needs some design work and new ways to keep its youngest users engaged.

eMarketer's also suggested that the number of apps used by Americans will decline next year as consumers "consolidate their behavior into fewer apps," particularly likely with apps like Messenger and WhatsApp, which are slowly integrating new features that make it less necessary for users to leave the apps' environment.

YouTube can sometimes feel like a world apart from other social platforms, including Facebook and Twitter, but as those latter networks continue to push farther into video, it's imperative that your brand understands just how tremendous YouTube's reach is, how it's becoming more social, and what type of content takes the cake among its users.

Filmora's infographic hits the nail on the head with the key stats, from what percentage of viewing comes from mobile devices and what terms are most searched for to whether bloggers, gamers, or scientists and technologists boast the most content on the platform. Consider it a crash course before your team strikes YouTube off its social media strategic plan. 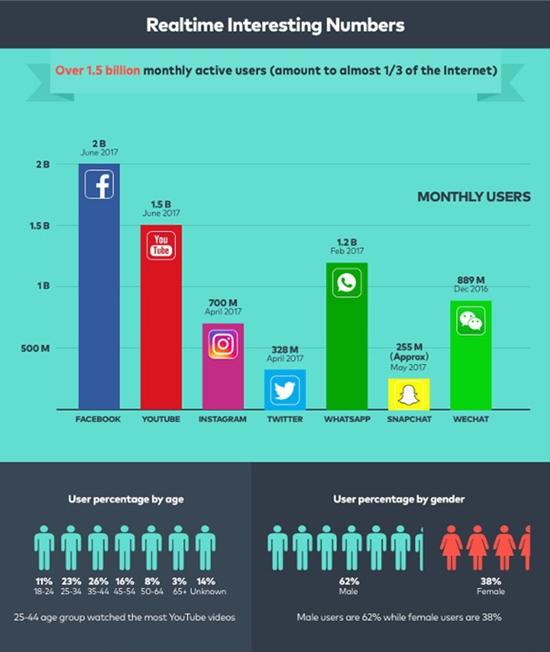 9. Living that Swift life: Taylor Swift to launch a social media app dedicated to her

Look what you made her do. The country-turned-pop princess has announced a late 2017 launch of The Swift Life, a dedicated social media app to let Swift fans connect with each other, see exclusive pictures and video, and just generally follow her every move.

The Swift Life will feature Taylor-inspired emojis (called Taymojis), replies from the singer herself, and the chance for users to listen Swift's music via the app.

It could all be tied to Swift's and Ticketmaster's recent announcement of a sort of pay-to-play ticketing system that puts fans that have purchased the singer's albums and interacted with the Swift brand on social media further up in the online queue for concert tickets. We'll just have to wait and see.

The move follows Facebook's struggle to make Stories work on its platform, so apparently it decided it was time to take advantage of Instagram's 250 million-plus Stories users, an impressive number that's surpassed Snapchat's despite Instagram Stories' much shorter existence.

We're bombarded—seemingly weekly—with stories about the dangers social media can pose for its youngest, most impressionable users. But can media, and particularly one that's social in nature, be an absolutely good or bad thing?

Some academics and therapists think the overwhelming number of warnings about social media's negative influence on young users' mental health overshadow to a great extent the benefits such platforms can have.

Some teens, they argue, experience boosts in self-esteem when viewing their own Facebook profiles, which often highlight their best traits and help users remember what's best about themselves. Other studies show that social media serves as a critical source of social and emotional support for countless teens that they can't find elsewhere, particularly for marginalized teens in difficult circumstances.

Social media is an integral part of society—and here to stay—so parents, teachers, and mentors must be ready to guide youth on how, and how not, to use social media wisely.