This week's Skim: Facebook's new standalone app wraps Yelp, Foursquare, and Facebook Events into one; Snapchat's massive redesign and upcoming algorithm; LinkedIn streamlines Lead Gen Forms for messages; Amazon courts Instagram and Twitter influencers with a commission program; the social app that was just bought by a Chinese startup for nearly $1 billion; why Pinterest just created its own version of QR codes, and how your brand could use them; and much more...

What's more credible to a consumer than their friends' and families' endorsements? Not a whole lot. That's what Facebook's banking on its new app that fuses the power of the world's biggest social network with the recommendations of your closest friends.

The social network essentially repurposed its Events, adding bar and restaurant info, to create an app that houses calendar events and listings, a map that lets you see how far you'd have to travel to get to that location or event, ratings and comments from friends and the wider Facebook audience about all the local spots in your neighborhood, the events that people you follow attend, attractions, and more. Your move, Yelp. 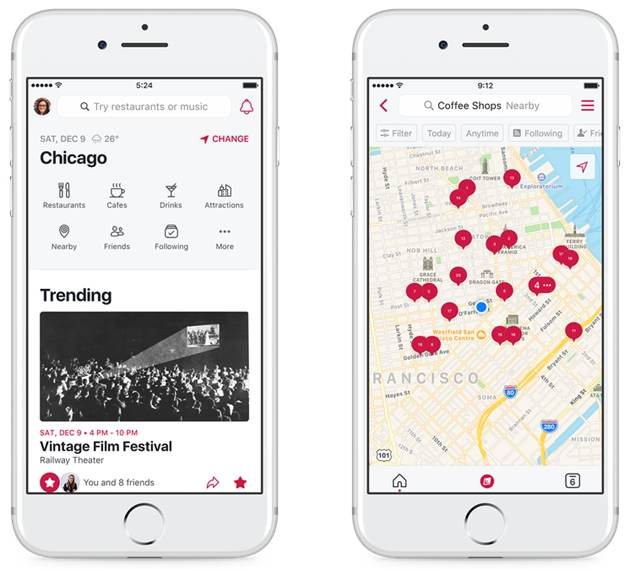 Mark your calendars: Snap Inc.'s set to give Snapchat a major redesign that's aimed to make the app easier to use, as well as introduce an algorithmic feed and new sections that will prioritize where, when, and from whom users see content. And it's coming soon.

That's the big teaser coming straight from the mouth of Snap Inc. CEO Evan Spiegel, and new insights suggest that content from friends will be separate from that of influencers and other public-facing accounts. Moreover, the update would also effectively kill the current Stories and Discover sections of the app. It all goes down on December 4th.

The business-centric social network created Lead Gen Forms that auto-populate professionals' personal details into a contact form of sorts to make it simpler and faster for users interested in new products or services to submit their information to companies. Users love it because it saves time, and companies do because it makes gathering leads easier and it can save them 20 cents per lead. 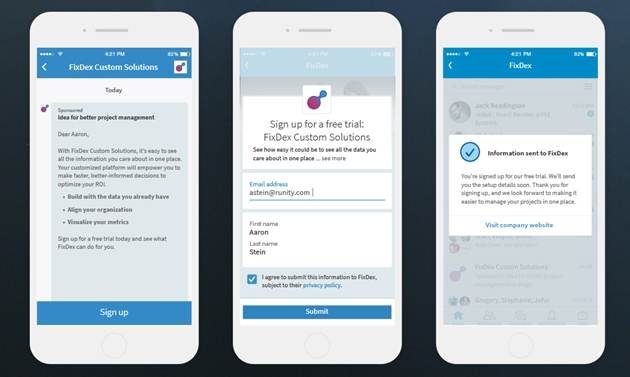 Amazon jumped into influencer marketing back in April with a program that provides commissions and vanity URLs to YouTube power users who link to Amazon product pages. Now the company's bringing the same opportunity to those influencers who call Instagram and Twitter home.

With influencer marketing expected to generate $2.4 billion by 2019, it's a smart move for Amazon, and an exciting opportunity for influencers who now have a new potential revenue stream for many of the products they're probably already promoting without benefiting.

5. Chinese startup to buy Musical.ly for about $1 billion

The Shanghai-based social app became a phenomenon in the way that it lets users easily stitch together lip-synced music videos. Fast-forward just three years, and this favorite of app stores is set to sell to a Chinese media startup for somewhere in the $1 billion ballpark.

Why is Musical.ly one to watch? It's the first Chinese social app to hit in big in the American market, and it's also probably the most successful video app not (yet) owned by Facebook or Google.

But investors might not be convinced just yet: Most of Musica.ly's users joined within the app's first two years of existence, suggesting a stagnation that could plague the app's growth and tarnish its potential in the eyes of Wall Street.

6. Facebook encourages collaboration with new Stories for Groups and Events

The social network is giving its Snapchat Stories clone a feature that Snapchat didn't yet make happen: collaborative Stories for Groups and Events within the Facebook app.

The new Stories will let invitees to Events or members of Groups contribute to one common Story that's visible to all members, with admin moderation. The new Stories format will let users on Facebook and those present in-person experience events such as weddings, meetups, conferences, and more from every angle.

Facebook is also making a move to integrate Stories into Facebook Lite, the stripped-down version of its app meant to attract users in markets with low bandwidth or high data costs.

7. Pinterest just launched its own version of QR codes

The social pinboard platform has announced Pincodes, its own version of QR codes, that let users easily find products and inspiration on the platform by scanning them with Pinterest's mobile app camera. Pincodes redirect users to specific boards or collections on the social network (such as Nordstrom's "Gifts under $100"), or directly to a brand's profile.

Kraft will use Pincodes on an upcoming product to showcase recipe ideas and hacks, while Kia will create a Pincode display at an auto show to highlight design features of a new vehicle. Brands can find out how to make a Pincode here.

8. LinkedIn launches free mentorship program for users in the US, the UK, and India

LinkedIn's expanding the mentorship service it tested with a closed group of users in San Francisco and Australia earlier this year, and now it's rolling out for all users in the US, the UK, and India. The new section, "Career Advice," connects users with mentors who can help with anything regarding your existing career, or the one you'd like to change to.

Users embark on a Tinder-swiping-like journey that lets them specify goals and what mentor profile they're in search of.

With Facebook and Google on its heels, LinkedIn's looking for just about anything that can help it differentiate its platform and keep users engaged. We think this could be a good one.

Facebook's Instagram is testing a way to let users follow specific hashtags on the platform, surfacing top posts and recent stories related to the key words.

Up until now, users on the photo and video sharing app could follow only individual users, so the ability to follow hashtags would enable them to stay on top of breaking news, follow topics that are important to them, and even help us social media marketers out with tracking campaign performance and engagement.

For now, it's just a test, but we hope this one will make it around to the next app update.

Ok this is new. What does this do @SimonSocialMM @BizPaul @NatalieTFG any ideas? I've followed 2 but can't find what that means!! pic.twitter.com/LlCBk4Wmfv

The whole world's talked a lot recently about Russian involvement in fake ads on Facebook, and their potential to sway elections. But will that conversation really tackle the root of the problem?

Forbes asks just that question while shedding light on the possible half-billion fake Facebook profiles that might be stemming social discord and, in turn, socially engineering our society.

A Forbes Agency Council contributor argues that fake profiles across the social Web, capable of generating thousands of seemingly authentic conversations in a matter of seconds, are the true culprits. Countless influencers—real or fake—post across platforms without disclosing their monetary ties for endorsements or their intentions. Although the FTC has begun taking steps to address the problem, it's no match for the new technology that has enabled the mass creation of fake profiles and personalities at rapid scale. Can Facebook really save us?