We first reported YouTube's intentions back in March, but now residents of five cities officially have access to YouTube TV.

It's by no means the first attempt at Internet TV, but such a big global player's getting into the mix should help increase competition and, hopefully, provide more flexibility in choice and pricing for consumers.

LinkedIn just streamlined the lead generation process for brands that use sponsored content on the platform. Once marketers add some sort of call to action to their sponsored content, the professional social network's new "Lead Gen Forms" mean advertisers can not only instantly collect contact details from quality leads but also directly connect those leads with content that might interest them and measure the impact of their efforts via LinkedIn's Campaign Manager interface.

Even better? The leads you generate can be easily imported to the customer relationship management (CRM) software of your choosing. How quickly will you get started?

Snapchat just got one step closer to taking on YouTube with the introduction of Search for Stories that have been submitted to its public "Our Stories" submission section, an area of the app where users can add their Stories to Snapchat's public database.

Before, that meant users had a chance to see their Story become a part of a themed collection of Stories curated by the Snapchat team. Now, that means anyone can search—and find—their masterpiece.

Users can search through over a million Stories in real-time by their desired keyword—an event, city, or anything else—and so they now have an infinite number of rabbit holes to descend into, and thus spend time on the app.

Who's to say that Amazon can't garner the power of social media influencers like other platforms and brands? The online retailer turned Internet giant has launched a private beta program called the Amazon Influencer Program that seeks out influencers with large followings across social networks and high fan engagement.

Each influencer will get a custom vanity Amazon URL where customers can scan through a selection of products they curate and recommend. The link, in turn, can be posted on other social platforms to drive traffic and sales to the influencers' pages.

The company will not, for now, work with influencers on product selection or provide freebies, leaving the contents of the pages entirely up to the influencer.

The social network is quietly testing a second News Feed for some user across both iOS and Android, indicated with a rocket ship icon within the app. Unlike your primary feed, this one's made up of posts from Pages and media organizations the social network thinks you'll like based on your interests and engagement.

Facebook is surfacing content, including posts, photos, videos, and articles, based on Pages you've already liked, things that are already popular among your friends, and your geographic location.

The company has made no formal announcement regarding this feature, and there's so far little indication that the News Feed alternative will soon roll out. 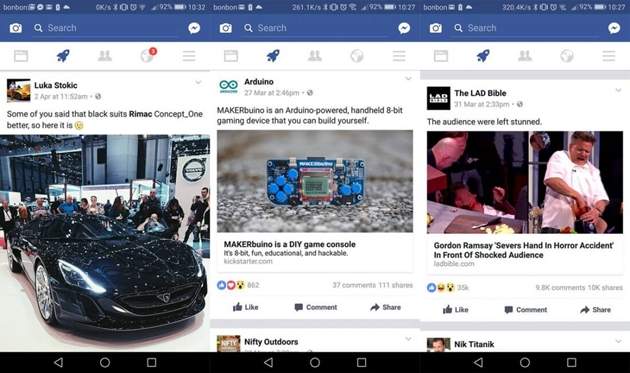 6. Twitter wants to stream live television, and it's working on deals to do so

YouTube isn't the only social media platform wanting to venture into a pay-TV service. Twitter could potentially have users watching—and tweeting about—all the live television programming they want.

The social network is working to secure deals with TV companies to stream pay channels on its website and app, as long as its users are also subscribed to the TV company's service.

Although there's no indication of how close Twitter might be to securing deals of this sort, requiring users to subscribe to a television service if they are to take advantage of such a feature could help assuage the concerns of TV executives traditionally concerned about Internet-only TV.

Group bots will reportedly serve more as "information bots" than chatbots, possibly helping Facebook shake the disappointment of users that found the original chat bots too basic to act—as described—as a human chat partner. Group bots should also add a virality and discoverability opportunity for bots, as there's currently (barring an announcement at Facebook's F8 developer conference) no bot store or browser for users to easily find them.

Snapchat has worked hard to improve its machine-learning and audience-segmenting capabilities, and now the company's ready to let marketers take advantage of those efforts. The social network has launched the ability for brands to target, with precision, the group of users it thinks is most likely to download its app.

The new app install ads will target users who have shown interest in your brand, or the functionality you offer, and marketers can set cost-per-download goals with the new ad format—a measure designed to attract brands of all backgrounds and sizes to Snapchat.

Marketers can also now employ retargeting ads on the platform, looking at users who've already interacted with their content—such as lenses, geo-filters, and videos—on the platform.

The social network not only rid itself of its infamous baby egg icon that served as the default profile picture for all new users but also introduced a new feature to make Twitter a better place for businesses. That's right, businesses now have an easier way to share or request location information with their customers via direct messages.

The changes mean businesses can easily activate a store locator function to help customers find them, or more easily customize their responses based on the physical location provided by their clients.

But customers don't have to send their actual location: They can pick a spot on a map and list a place nearby. This feature could be particularly helpful for deliveries, making reservations, or locating customers who are having issues with services such as outages and more.

Introducing the News Integrity Initiative, a global consortium headed up by the CUNY Graduate School of Journalism with Facebook as a founding funder.

Amid the controversy around fake news in the past year, the $14 million fund's mission will be to advance news literacy, increase trust in journalism around the world, and better inform the public conversation. Who better than Facebook to take part?

The consortium's other founding members include Mozilla, the Ford Foundation, and the Democracy Fund, among others. The group's initiatives will back applied research and products, and convene meetings with industry experts.

We warned you about it in a previous 'Skim, and now Germany's ministers have approved a plan that would fine social media networks around $53 million if they fail to remove hate speech and fake news quickly.

The proposed law would allow 24 hours for social networks to block obviously criminal content after it has been reported, and seven days for other offensive content.

The government points to YouTube's ability to pull 99% of hate speech as an indicator that Facebook and Twitter, among others, could do better, but Facebook points out that the legislation would have private companies—rather than courts—judging what is considered illegal in the country.