How to Turn Negative Social Media Into a Positive

Today, companies big and small use social media as a way of marketing their products and services. Social media also provides a platform for interaction between brands and customers.

Many customers find social media the best way to get in touch with brands and look for a quick response and direct access. However, with the good comes the bad, and social media is not always about happy comments and grateful customers. At times, customers flock to a brand's social media page to express concerns or complaints; often, when that happens, account managers panic.

Do's and Don'ts of Dealing With Negative Social Media Comments

Social media account managers should always respond to complaints received via social media. Responding shows that you are listening to customers and acting on their concerns.

If the issue is complex, consider taking it out of the spotlight; social platforms may not be the best place to resolve it. Offer to continue the conversation via a more appropriate medium—whether that's the phone, email, or an existing support forum online.

Responding quickly and with care, however, is essential. The quicker you reply, the more likely your customers will feel you think they are important; you also give the commenter less time to complain again. That is why companies should have staff monitoring their social media accounts every day.

When dealing with complaints, think of the bigger picture and the effect public complaints will have on your business. Following up with customers is a good way to make sure they are happy with how you have addressed and remedied the situation.

Two things you most definitely shouldn't do when managing your company's social media account: deleting comments and getting defensive. Businesses that delete customer complaints and negative comments or become overly defensive only infuriate customers and escalate the issue. Take a minute to gather your thoughts and read over your response before you post; make sure you are representing the company well and displaying professionalism.

Those are the standard ways of responding to complaints. There are also some excellent instances of brands that were being bullied and trolled on social media (or they had made a PR mistake), which then rose to the occasion by being a little tongue in cheek or using humor, turning the issue into something fun and entertaining.

After receiving a Facebook comment from a man named Richard Neill complaining that Bodyform misguided people into think that women's periods were "happy" times of the month, Bodyform responded by creating a witty apology video featuring CEO Caroline Williams. Throughout the video she apologizes for years of lying to men about women's periods by showing them skydiving, horse riding, and rollerblading in their videos. She states that the video has been created to set the record straight and humorously congratulates Richard for uncovering the lies.

It's a clever and funny video that provides a perfect example of how to turn negative social media into a positive.

If you follow Tesco Mobile on Twitter, you will have seen the tongue-in-cheek #nojoke responses to negative tweets, including one that received over thousands of retweets! One of our favorite examples is the following: 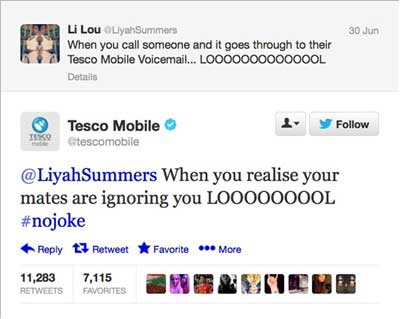 To which Liyah Summers later tweeted with a reply, "ok, you win, I'm sorry."

It takes guts to be this cheeky, but Tesco Mobile is doing it successfully.

Another example of a social media turnaround was a rogue tweet sent out accidentally by the American Red Cross social media specialist. She mistakenly thought that she was tweeting from her personal account and tweeted "Ryan found two more 4 bottle packs of Dogfish Head's Midas Touch beer.... when we drink we do it right #gettngslizzered."

That mistake could have potentially caused outrage, but the Red Cross handled the situation by removing the tweet and sending out a humorous tweet: "We've deleted the rogue tweet but rest assured the Red Cross is sober and we've confiscated the keys" (throwing in a little message about drink driving while they were at it.)

Beer company Doghead Fish also helped the situation out by getting Twitter followers to donate to the Red Cross using the hashtag #gettngslizzerd.

A fantastic result for what initially started out as a PR mistake.

When The Alamo Drafthouse cinema received a complaint from an angry customer who had been kicked out for using her phone in the cinema, it decided to use the opportunity to create a marketing video, which was then played in the cinema and uploaded to social media pages.

The video played out the call from the customer with a response that reinforced the message that the business does not tolerate the use of mobile phones in the cinema and the ruining of other peoples' experiences.

For most companies, most of the time, social media provides a platform to engage positively with customers and prospects. But, as in the offline world, no matter how great your brand is, mistakes happen and customers get upset and complain. Whether you take the straightforward approach or you respond with humor, the one thing you cannot do is put your head in the sand and hope the issue will magically disappear.