Study: Social Media Use by Fortune 500

The adoption of social media is growing among the nation's largest corporations: 22% of the 2009 Fortune 500 companies have public-facing blogs with a post in the past 12 months, and 35% have active registered Twitter accounts with a tweet sent within the past 30 days, according to a study from the University of Massachusetts at Dartmouth.

Below, other findings from The Fortune 500 and Social Media: A Longitudinal Study of Blogging and Twitter Usage by America's Largest Companies.

Among the Fortune 500, the 108 companies that maintain blogs come from a cross-section of industries: 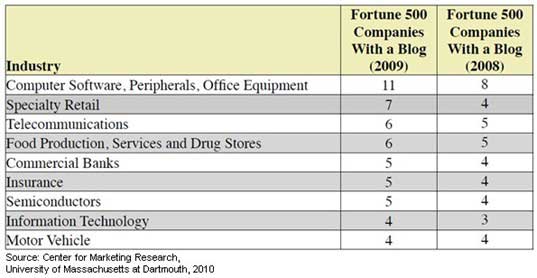 Below, a partial list showing those industries with the greatest blog presence and representative sample of companies within the industry:

Nine in ten Fortune 500 blogs take comments, have RSS feeds, and take subscriptions. In addition, 86% are linked directly to a corporate Twitter account—over three times the level recorded in 2008.

However, both groups registered increases of six percentage points in their blogging activity in 2009 compared with levels recorded in 2008.

Over one-third (35%) of the primary corporations listed on the 2009 Fortune 500 have a Twitter account and have tweeted within the previous 30 days.*

Among the Fortune 500, the 173 companies with registered Twitter accounts come from a cross-section of industries.

Below, a partial list showing those industries with the greatest Twitter presence and a representative sample of companies within the industry:

Over two-thirds (69%) of Fortune 500 Twitter accounts demonstrate a high level of interaction, having consistently responded with @replies or retweets within the previous 30 days. Among this active group, the accounts are kept current with news and information, and there is consistent interaction with other users and ongoing discussions that are easy to follow.

Use of Video and Podcasting

The use of video and podcasting is increasing among the Fortune 500: 31% use video to enhance their blog, up from 21% in the previous year, and 19% use podcasting, up from 16%. 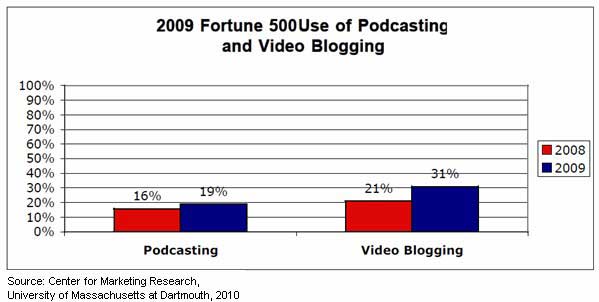 *Four of the companies (Boeing, Footlocker, FPL Group, and Winn-Dixie Stores) had their tweets protected and required a request to view their profile. Since posts within the last 30 days could not be verified, they were excluded from the tally. Nine of the companies (Baker Hughes, CIT Group, Computer Sciences, Delta Air Lines, Ecolab, Manitowoc, Mattel, MeadWestvaco, and Union Pacific) with corporate Twitter accounts had not posted within the past 30 days, so they were excluded from the analysis since they did not meet the definition.

About the data: Findings are from The Fortune 500 and Social Media: A Longitudinal Study of Blogging and Twitter Usage by America's Largest Companies, conducted by Nora Ganim Barnes, PhD, Center for Marketing Research at the University of Massachusetts at Dartmouth, and Eric Mattson CEO, Financial Insite. The data was collected in October and November 2009.