Many CEOs are doubtful their companies can handle a volatile, increasingly complex business environment: 79% expect high or very high levels of business complexity over the next five years, and only 49% say their organizations are fully prepared to deal with that increased complexity, according to a study by IBM.

To cope with those changing business realities, most CEOs plan to focus both on developing new revenue sources and stronger customer relationships over the next five years.

Below, other findings from the biennial IBM Global CEO Study, based on interviews with 1,541 CEOs, general managers, and senior public-sector leaders from 60 countries and 33 industries.

Impact of Technology on Business

Asked to name the three external forces that will have the biggest impact on their organizations in the next five years, 56% of surveyed CEOs cite market factors—which has consistently topped the list since 2004.

However, this year, technological factors has risen in relative importance and now holds second place (39%), followed by macroeconomic factors (38%) and people skills (37%). 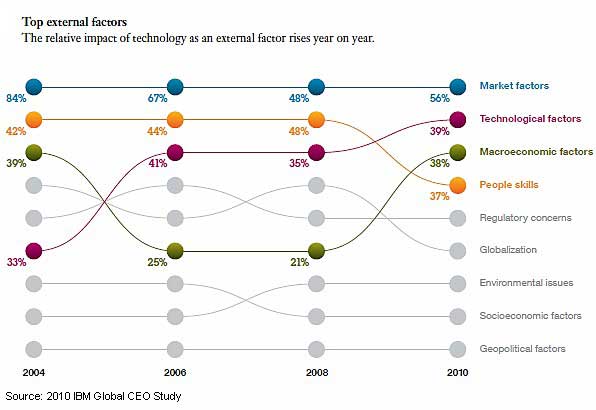 The complexity of an interconnected world is exacerbated by other factors, including increased competition: 65% of surveyed CEOs foresee a shift of economic power to rapidly developing markets, and 70% say they must double revenue from new sources in the next five years.

Above other business priorities, CEOs want to reignite customer interest and loyalty: 88% say getting closer to the customer is the most important dimension to realize their strategy in the next five years. 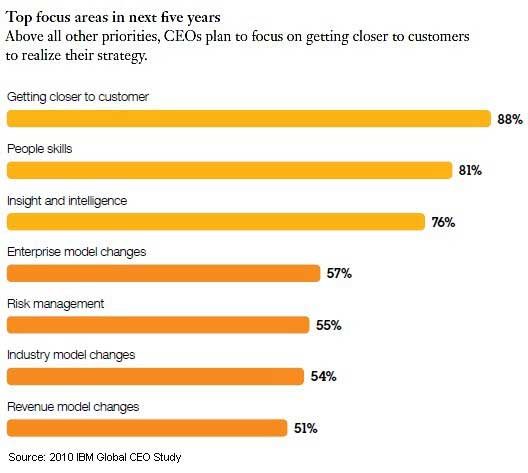 Business leaders are convinced they must not only stay connected (or reconnect) with customers but also continue to learn how to strengthen those bonds—using Web, interactive, and social media channels to reengage with customers.

Some 81% of CEOs also cite acquiring the right people as a top focus, while 76% cite gathering insight and market intelligence.

Some 69% of CEOs say customers will expect more collaboration and information sharing—a priority driven largely by social networking, which has exponentially increased the degree of interaction customers expect of organizations. 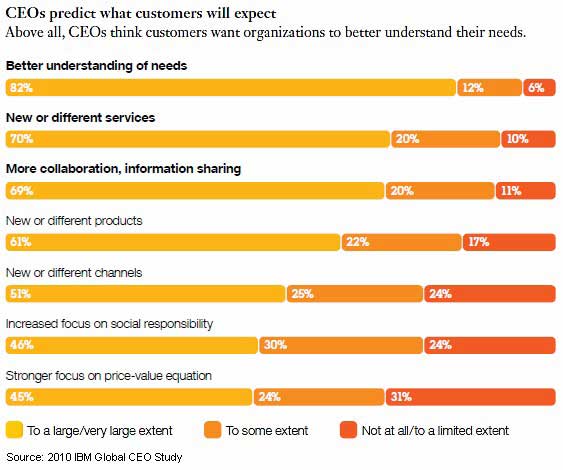 Given the degree of difficulty companies now anticipate—based on today's business complexities—60% of CEOs cite creativity as the most critical leadership quality over the next five years, followed by integrity (52%) and global thinking (35%). 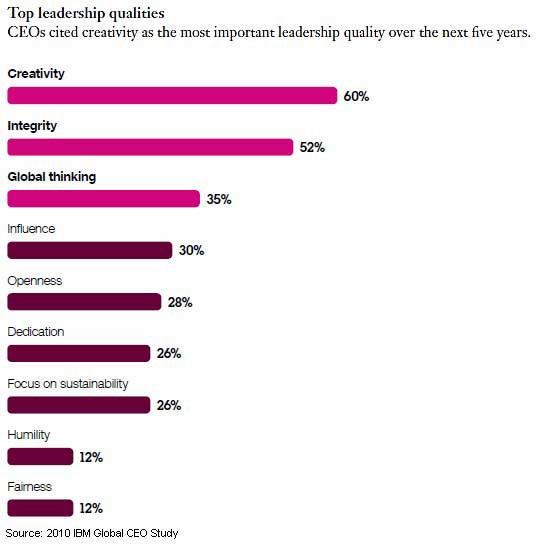 About the data: Findings are from the biennial IBM Global CEO Study, based on interviews conducted in late 2009 and early 2010 with 1,541 CEOs, general managers, and senior public-sector leaders from 60 countries and 33 industries.