Consumers continue to join and engage with social networking sites, but the percentages of those who contribute new and fresh content to a broad array of social media fell or reached a plateau in 2010, compared with levels recorded a year earlier, according to a study by Forrester Research.

New social media content creation, however, is limited to existing "Creators." The percentage of such users—those who publish a blog, update Web pages, upload user-generated video, or write and post content—fell to 23% of online consumers in 2010, down 1 percentage point from 24% in 2009. 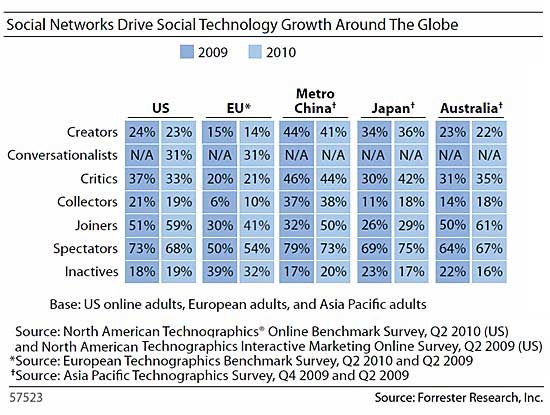 Importantly, the percentage of "Critics"—those who post ratings and reviews, comment on various blogs, and contribute to online forums—declined 4 points in 2010 to 33%, from 37% in 2009.

Among other key Social Technographics trends in 2010 (US online consumers):

Across other geographic regions surveyed, the percentages of Joiners increased overall—with Europe, metropolitan China, and Australia registering double-digit point growth. For example, in metropolitan China, Joiners registered an 18-point increase in 2010 to 50%, from 32% a year earlier, but Creators fell 3 points, from 44% in 2009 to 41% in 2010.

In Europe and metropolitan China, the numbers of Critics remained flat or declined. Most regional markets registered increases in Spectators—generally considered social media novices, but important  audiences for Creators and Critics.

About the data: Findings are from Forrester's updated Social Technographics Ladder, which groups consumers into seven categories of social media behavior. For the Q210 US Technographics Online Benchmark Study Forrester conducted an online survey fielded in April 2010 of 26,913 US online users age 18 to 88.