Over the past two years, the number of people using social networking sites has nearly doubled, while the population of social networking users has shifted to older audience segments, according to a report by Pew Research. Now constituting a near majority of the US population (47%), people who use social sites are more politically engaged than other adults and are more likely to trust others.

Below, additional findings from the report titled "Social Networking Sites and Our Lives, issued by the Pew Research Center's Internet & American Life Project and Project for Excellence in Journalism.

For example, nearly twice as many men (63%) as women (37%) use LinkedIn. All other social platforms have significantly more female users than male users. 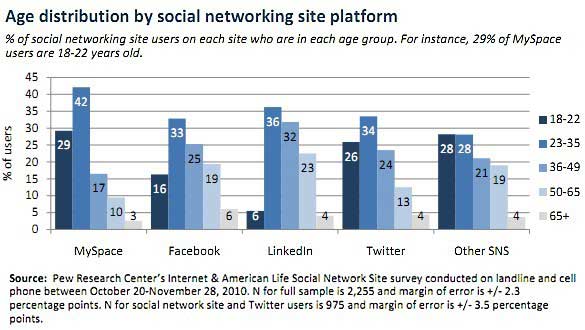 MySpace users tend to have fewer years of formal education than users of other social network services, whereas most (65%) LinkedIn users have at least one university degree.

There are also key differences in the way people use social sites: 52% of Facebook users and 33% of Twitter users engage with the platform daily, while only 7% of MySpace and 6% of LinkedIn users do the same.

On average, Facebook users have 229 friends on the site, with people from high school comprising the biggest share of friends (22%), followed by extended family members (12%), coworkers (10%), college friends (9%), and immediate family members (8%).

On a typical day using Facebook, users conduct a number of the following activities:

Some 18% of women update their Facebook status at least once per day. Only 11% of men do the same.

Meanwhile, Facebook users age 35+ are the least likely to have ever updated their Facebook profile or to update their status more than 1-2 days per week. 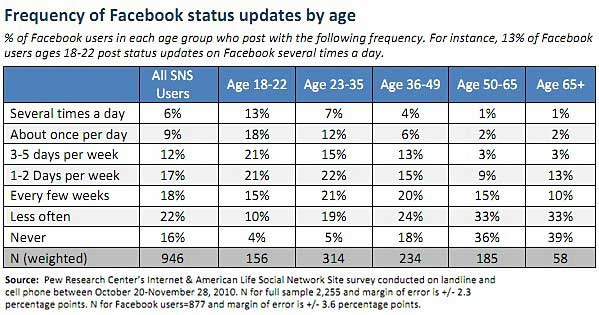 Internet users tend to be more trusting than non-users: 46% of Internet users say "most people can be trusted," compared with 27% of non-users and 41% of all adults who say the same. 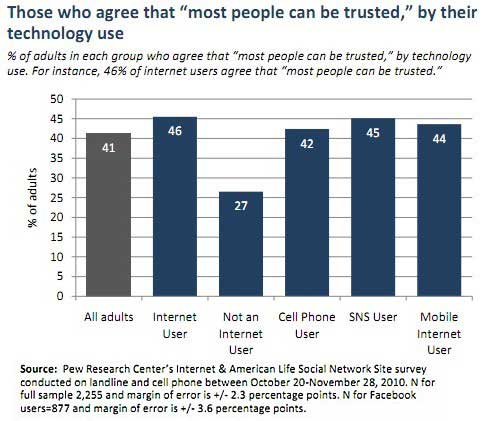 Given it's relatively older and more educated demographic, LinkedIn users tend to be more politically engaged and more reliable at casting votes: 14% of LinkedIn users say they attended a political rally in 2010, 36% tried to persuade someone to vote, and 79% reported that they did or intended to vote.

MySpace users are the least politically active: Only 9% attended a political rally, 18% attempted to influence someone's vote, and 57% voted or intended to vote.

Even so, Facebook is still the hub for most politically active social media users. Controlling for demographics such as sex, age, and education, active Facebook users—those who visit the site multiple times per day—are two and one-half times more likely to attend a political rally or meeting, 57% more likely to persuade someone on their vote, and 43% more likely to have said they would vote.

About the survey: Findings are from the report titled "Social Networking Sites and Our Lives," authored by Keith N Hampton, University of Pennsylvania; Lauren Sessions Goulet, University of Pennsylvania; Lee Rainie, Pew Internet Project; and Kristen Purcell, Pew Internet Project, issued by the Pew Research Center's Internet & American Life Project and Project for Excellence in Journalism, June 16, 2011, accessed on June 20, 2011. Data are based on a survey of 2,255 adults, age 18 and older, conducted by Princeton Survey Research Associates International from Oct. 20 to Nov. 28, 2010.