Many mobile users are unsatisfied with the mobile Web experience: 18% of smartphone users say their recent mobile browsing experiences have been frustrating and 70% describe their experiences as "just OK," according to a new survey from Modapt and Morrissey & Company.

Such dissatisfaction appears to affect banner ad performance: 92% of surveyed smartphone owners say they are less likely to click on a banner ad via mobile browser than desktop browser.

Below, additional findings from a survey of mobile users (95% reported using a smartphone) jointly issued by Modapt and Morrissey & Company.

Navigating websites (40%) and slow downloads (40%) are the biggest challenges among smartphone users, followed by information that's hard to read or find (20%): 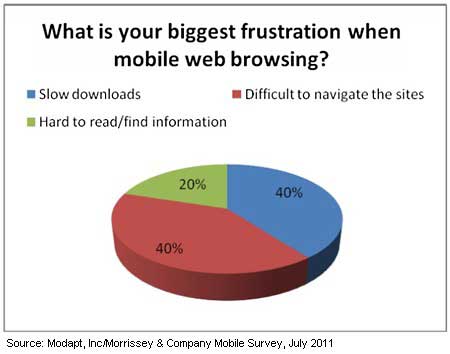 Smartphone users rely on their devices most for finding information about businesses (31%) and destinations (30%), but visiting social media sites is the biggest draw for roughly 20% of mobile audiences: 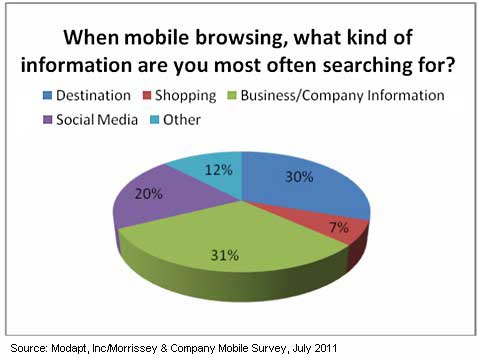 But few smartphone users make purchases via mobile device often (4%) or even sometimes (20%). 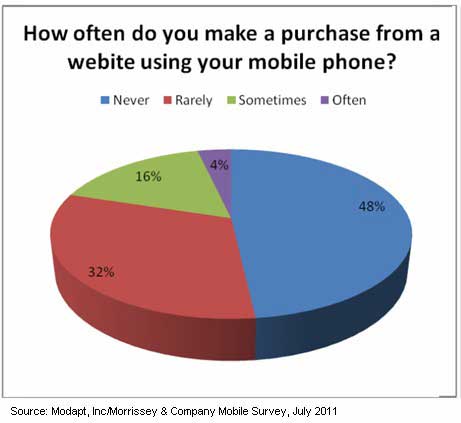 Not surprisingly, fully one-half (50%) of smartphone users say they feel less secure about paying for something via mobile browser than desktop browser.

About the data: Findings are from a survey of 150 mobile phone users in July 2011, conducted jointly by Modapt Inc. and Morrissey & Company. Some 95% of respondents reported using a smartphone; all were highly qualified mobile users, according to the data provider, including IT knowledge workers and members of academia.